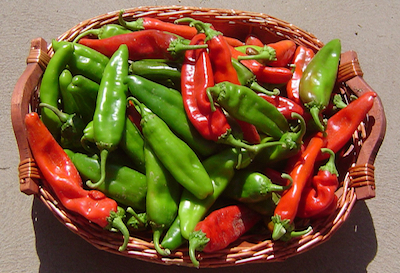 According to many accounts, chile peppers were introduced into what is now the U.S. by Capitn General Juan de Oñate, the founder of Santa Fe, in 1598. However, they may have been introduced to the Pueblo Indians of New Mexico by the Antonio Espejo expedition of 1582-83. According to one of the members of the expedition, Baltasar Obregón, “They have no chile, but the natives were given some seed to plant.” By 1601, chiles were not on the list of Indian crops, according to colonist Francisco de Valverde, who also complained that mice were a pest who ate chile pods off the plants in the field.

“A la primera cocinera se le va un chile entero,” goes one old Spanish dicho, or saying: “To the best lady cook goes the whole chile.” And so it is that the chile pepper is the single most important food brought from Mexico that defines New Mexican cuisine. After the Spanish began settlement, the cultivation of chile peppers exploded, and soon they were grown all over New Mexico. It is likely that many different varieties were cultivated, including early forms of jalapeños, serranos, anchos, and pasillas. But one variety that adapted particularly well to New Mexico was a long green chile that turned red in the fall. Formerly called “Anaheim” because of its transfer to the more settled California around 1900, the New Mexican chiles were cultivated for hundreds of years in the region with such dedication that several distinct varieties developed.

These varieties, or “land races,” called ‘Chimayo’ and ‘Española,’ had adapted to particular environments and are still planted today in the same fields they were grown in centuries ago; they constitute a small but distinct part of the tons of pods produced each year in New Mexico.

In 1846, William Emory, Chief Engineer of the Army’s Topographic Unit, was surveying the New Mexico landscape and its customs. He described a meal eaten by people in Bernalillo, just north of Albuquerque: “Roast chicken, stuffed with onions; then mutton, boiled with onions; then followed various other dishes, all dressed with the everlasting onion; and the whole terminated by chile, the glory of New Mexico.”

Emory went on to relate his experience with chiles: “Chile the Mexicans consider the chef-d’oeuvre of the cuisine, and seem really to revel in it; but the first mouthful brought the tears trickling down my cheeks, very much to the amusement of the spectators with their leather-lined throats. It was red pepper, stuffed with minced meat.”

New Mexican chiles are pod types of the annuum species. The plant has mostly a compact habit with an intermediate number of stems, and grows between 20 and 30 inches high. The leaves are ovate, medium green, fairly smooth, and about 3 inches long and 2 inches wide. The flower corollas are white with no spots. The pods are pendant, elongate, bluntly pointed, and measure between 2 and 12 inches. They are dark green, maturing to various shades of red. Some ornamentals are yellow or brown. Their heat ranges from quite mild to medium, between 500 and 2,500 Scoville Units. 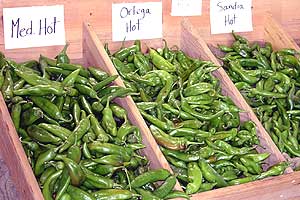 The earliest cultivated chiles in New Mexico were smaller than those of today; indeed, they were (and still are, in some cases) considered a spice. But as the land races developed and the size of the pods increased, the food value of chiles became evident. There was just one problem–the bewildering sizes and shapes of the chile peppers made it very difficult for farmers to determine which variety of chile they were growing from year to year. And, there was no way to tell how large the pods might be, or how hot. The demand for chiles was increasing as the population of the state did, so it was time for modern horticulture to take over.

Chile pickers in a field near Las Cruces, NM

Finally, in 1917, after ten years of experiments with various strains of pasilla chiles, Garcia released New Mexico No. 9, the first attempt to grow chiles with a dependable pod size and heat level. The No. 9 variety became the chile standard in New Mexico until 1950, when Roy Harper, another horticulturist, released New Mexico No. 6, a variety which matured earlier, produced higher yields, was wilt resistant, and was less pungent than No. 9.

The New Mexico No. 6 variety was by far the biggest breakthrough in the chile breeding program. According to the late Dr. Roy Nakayama, who succeeded Harper as director of the New Mexico Agricultural Experiment Station, “The No. 6 variety changed the image of chile from a ball of fire that sent consumers rushing to the water jug to that of a multi-purpose vegetable with a pleasing flavor. Commercial production and marketing, especially of green chiles and sauces, have been growing steadily since people around the world have discovered the delicious taste of chile without the overpowering pungency.”

In 1957, the New Mexico No. 6 variety was modified, made less pungent again, and the new variety was called “New Mexico No. 6-4.” The No. 6-4 variety became the chile industry standard in New Mexico and over thirty years later was still the most popular chile commercially grown in the state. Other chile varieties, such as Big Jim (popular with home gardeners; see picture above) and New Mexico R-Naky, have been developed but became popular mostly with home gardeners.

Today, Dr. Paul Bosland, who took over the chile breeding program from Dr. Nakayama, is developing new varieties that are resistant to chile wilt, a fungal disease which can devastate fields. He has also created varieties to produce brown, orange, and yellow ristras for the home decoration market. The breeding and development of new chile varieties–in addition to research into wild species, post-harvest packaging, and genetics–is an on-going, major project at New Mexico State. But modern horticultural techniques finally produced fairly standardized chiles. New Mexico is by far the largest commercial producer of chile peppers in the United States, with about 35,000 acres under cultivation.

All of the primary dishes in New Mexico cuisine contain chile peppers: sauces, stews, carne adovada, enchiladas, posole, tamales, huevos rancheros, and many combination vegetable dishes. The intense use of chiles as a food rather than just as a spice or condiment is what differentiates New Mexican cuisine from that of Texas or Arizona. In neighboring states, chile powders are used as a seasoning for beef or chicken broth-based “chili gravies,” which are thickened with flour or cornstarch before they are added to, say, enchiladas. In New Mexico, the sauces are made from pure chiles and are thickened by reducing the crushed or pureed pods.

New Mexico chile sauces are cooked and pureed, while salsas utilize fresh ingredients and are uncooked. Debates rage over whether tomatoes are used in cooked sauces such as red chile sauce for enchiladas. Despite the recipes in numerous cookbooks, traditional cooked red sauces do not contain tomatoes, though uncooked salsas do. 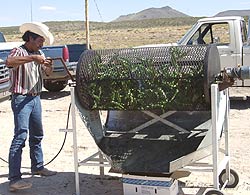 New Mexicans love chile peppers so much that they have become the de facto state symbol. Houses are adorned with strings of dried red chiles, called ristras. Images of the pods are emblazoned on signs, T-shirts, coffee mugs, posters, windsocks, and even underwear. In the late summer and early fall, the aroma of roasting chiles fills the air all over the state and produces a state of bliss for chileheads.