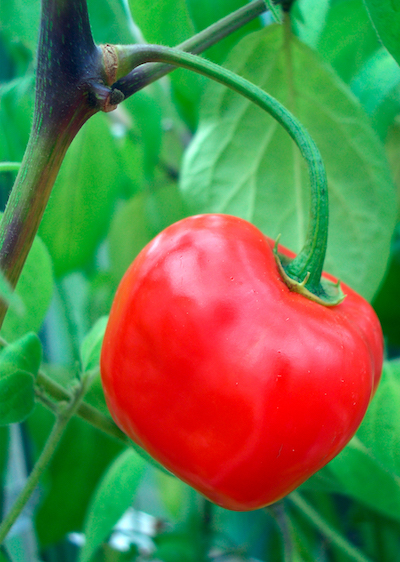 Pubescens is the only domesticated Capsicum species with no wild form; however, two wild species, C. cardenasii and C. eximium, are closely related. The center of origin for this species was Bolivia, and the species was probably domesticated about 6,000 B.C., making it one of the oldest domesticated plants in the Americas. Botanist Charles Heiser, citing Garcilaso de laVega (1609), notes that pubescens was “the most common pepper among the Incas, just as it is today in Cuzco, the former capital of the Incan empire.”

Pubescens has a compact to erect habit (sometimes sprawling and vine-like) and grows up to 4 feet tall, but 2 feet is more usual in U.S. gardens. In Bolivia, they grow to 15 feet. The leaves are ovate, light to dark green, very pubescent (hairy), and measure up to 3 1/2 inches long and 2 inches wide.

The flowers have purple corollas, purple and white anthers, and stand erect above the leaves. The pods are round, sometimes pear-shaped, measuring about 2 to 3 inches long and 2 to 2 1/2 inches wide, but some pods as large as Bell peppers have been reported. The pods are green in their immature state, maturing to yellow, orange, or red.

Their heat level is 30,000 to 50,000 Scoville Units and higher. The pubescens varieties contain a unique set of capsaicinoids (pungency compounds), causing some people to believe they are hotter than habaneros. In parts of the Americas they are referred to as “el mas picante de los picantes,” the hottest of the hot. 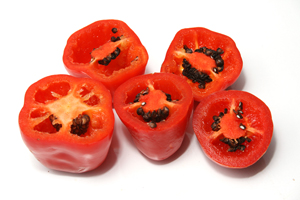 This is the only chile pepper plant with black seeds.

As with C. frutescens, there is a lack of pod diversity with C. pubescens. The fruits are large and stay attached to the plant. There are wild forms of C. annuum, C. chinense, and C. baccatum; however, with C. pubescens, no plant with small fruits that easily separate from the plant has ever been found. It has been suggested that C. pubescens was domesticated so long ago that its wild form is extinct. So, even if it had been domesticated for so long, why is the variability less? One explanation is that when C. pubescens was domesticated it went through a “founders effect.” Founders effect is when the establishment of a new population is founded by a few original individuals that carry only a small fraction of the total genetic variation of the parental population. If this was the case, there is not enough genetic diversity to allow for genetic recombination to produce the assortment of pod forms seen in the other species.

Furthermore, C. pubescens is isolated from other domesticated species and cannot cross-pollinate with them. This reduces the genes available. Another factor may be the climate in which it grows best. Because it thrives only in a narrow temperature range, C. pubescens may not have been grown in as many places, thus reducing the opportunity for selection by humans.

Scientists are presently addressing this question with sophisticated molecular techniques, and may have an answer as to the lack of pod diversity in a few years. Of course, their work depends upon having the genetic resources available–the seeds of the future.

It is grown today in the Andes from Chile to Colombia, mostly in small family plots. It is also cultivated in highland areas of Central America and Mexico. The common name for this species in South America is rocoto or locoto. In Mexico, it is also called chile manzano (apple pepper), and chile perón (pear pepper), both allusions to its fruit-like shapes. In some parts of Mexico and Guatemala, pubescens are called chile caballo, “horse pepper.” Yellow pubescens are called canarios, or canaries, in parts of Mexico, particularly Oaxaca.

The pubescens are traditionally grown in high mountain areas of tropical countries. They can survive very light frosts but not hard freezes. Some sources state that because of their long growing season and need for long day length, the pubescens varieties are unsuitable for cultivation in the United States. However, experiments have shown that plants started early can achieve fruiting in one season. Some plants may not fruit because there is mostly self-incompatibility in the species. To set fruit, pollen must be transferred by bees or humans from a neighboring plant of the same variety. The species also responds well to shading because the foliage has a tendency to burn in full sun. The growing season is long, 120 days or more, and the plants produce up to 30 pods, depending on the length of the growing season.

Pubescens varieties are usually consumed in their fresh form because the pods are so thick they are difficult to dry. They are commonly used in fresh salsas, and the larger pods can be stuffed with meat or cheese and baked.