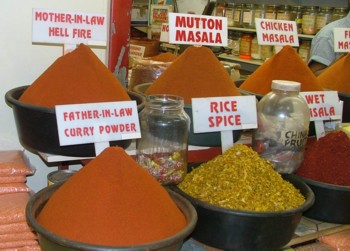 Speak to any traveler who has been to South Africa, and they probably will tell you that they visited Cape Town, to enjoy the vineyards and the spectacular scenery, and the Kruger National Park for a requisite safari experience. But the great pity is that they narrowly missed one of the most sensuous and diverse cities in all of Africa: the port city of Durban, which is just a short hop off the normal tourist route. 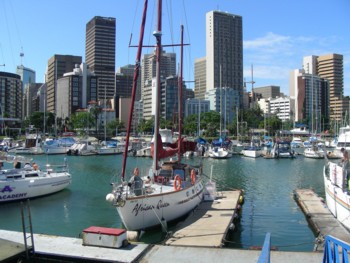 The Yacht Harbor with the Docked African Queen

Zulus, Indians and Brits have all called the city of Durban home for over 150 years. Beaded African headdresses, iridescent Indian saris, and starched safari outfits all complement each other on the street of Durban where brightly be-decked Zulu rickshaws in full battle dress haul tourists around the city affirming the city’s unique mix of the African and the Indian.

This sub-tropical paradise is set around a magnificent palm-lined bay. It is a city of more than two million people and it is unabashedly colorful. The original inhabitants are the descendants of the warrior king Chaka Zulu. Then, in 1820, very stiff-upper-lipped British colonials arrived and in the 1860s brought indentured Indian workers from South India to cut their sugar cane. The Indian population has a rich history here. Durban was once home to Mahatma Gandhi, who practiced law here in 1893 and stayed for 21 years. He came fresh from his Oxford studies in England to represent down-trodden Indian cane-cutters in their fight for rights. You may visit his home in the Phoenix settlement outside Durban.

I was born in Durban, thanks to my grandmother who settled here in 1909. In her twenties, she set sail from Southampton, England to work as a hospital nurse in India. The long ocean voyage from Europe to India took her around the southern tip of Africa. She stopped here to break her three-month voyage, met her husband-to-be, and she never got to India. But she almost did, because Durban has the largest population of Indians outside India. So I grew up caught up in this strange masala (mix) of Colonial British starched white clothing and Victorian ideals, Zulu servants who kept large beaded snuff boxes in their elongated ear lobes and Indian cooks who were simmering curries in our kitchens.

The curry of Durban is derived from the hot peasant curries that were brought by the Indian immigrants from the provinces of Gujarat and Tamil Nadu. Their curry is a very spicy red curry, its dominant color coming from the fiery dried chillies used as the major ingredient in the curry powder. In the U.S.A., the best equivalent to Durban Masala curry powder would be a “red curry powder” rather than the normal typical curry powder found on our supermarket shelves which tends to be yellow in color from the turmeric in it. In addition, a good dose of cayenne pepper fires things up. This dish was adopted by the British settlers and also the Zulu inhabitants, simplified and streamlined to become a staple enjoyed by all. It is the one dish that everyone regardless of skin color is passionate about.

A typical Durban curry is made in a heavy pan. First onions are browned in oil, then the curry powder is added, then the garlic and ginger. The mixture is simmered a little before the lamb, chicken, beef or fish is folded in and then all the remaining ingredients added. The pan is covered and the dish is left to simmer, bringing all the flavors of this rich concoction together. Finally a little cilantro is folded in just before serving.

The curry is usually served over white rice with condiments such as chutney, sambals and pappadums:

Chutney (derived from the Indian word Chatni) is a fruit- and onion-based preserve that is spiced with red chillies. The most famous South African chutney is Mrs. H.S. Ball’s Chutney and can be bought in stores all over the world.

Pappadums are Indian bread which is made of ground lentils and chick peas. It is usually bought ready-made and is deep fried or grilled.

A popular way to serve Durban curry is in a bread bowl. This dish is called “Bunny Chow.” The word “bunny” is derived from the word “bania” which in Durban was the word used for an Indian trader. This dish was born out of the divisive days of the apartheid system. In “whites-only” restaurants blacks were served take-away from the curbside. To make Bunny Chow, a loaf of bread is cut in half, the center is removed and the curry spooned in. Food on the go is never more delicious than this spicy truly Durban treat. It is always eaten with your fingers.
Another staple dish on the Durban scene is an appetizer called Samoosas (spelled “Samosa” in India). These are triangular-shaped savory pastries similar in look to the Greek Spanokopita, but this African equivalent is typically filled with a spicy curry of ground beef and/or mixed vegetables. The Samoosas are served piping hot right out of the oven. 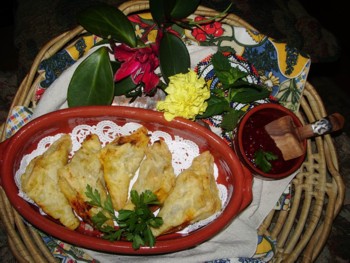 Samoosas
The best place to obtain the ingredients for a Durban Curry is the Victoria Market. In my youth, this market was where most all food in Durban changed hands, catering to British Colonials, Zulus, and Indians alike with its encyclopedia of products and their accompanying tastes and aromas. In 1973 the Victoria Market was damaged by fire and later rebuilt on a smaller scale. Today it caters more to tourists but it is still as colorful as ever but in a slightly more sanitized way–the live chickens, parrots and sheep heads are gone–but Zulu sangomas–traditional healers still sell very suspicious-looking potions that would make Macbeth’s witches jealous. 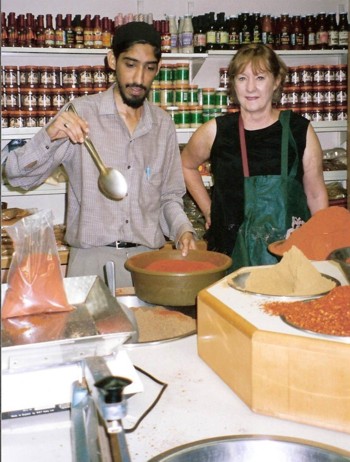 The Author at Victoria Market

Here there are 180 stalls, with about every second stall within the market selling curry. The spicy blends of curry powder have very innovative names such as “mother-in-law’s tongue,” “steak and chops,” “chicken lickin’,” and “green fish.” The curry powders are piled into pyramids displayed in large enamel bowls. The multiple mounds of the different blends have tones of brick red, burned umber, and mustard. The rest of the Victoria market is filled with curio dealers selling African beaded everything, carvings, brass goods, and animal skins of all varieties.

In this market, the “Africa meets Asia” aroma is so strong that my childhood is right here with me. Although my husband and I have lived in the U.S.A. since 1978 and love our life in Denver Colorado, the longing for a good Durban Curry has never gone away. The remembering of this spicy rich aromatic ritualistic meal brings the scents of my youth right back to my nose.

Of course there are thousands of ways to make a curry for a curry powder is just a blend of different spices. But what is the basic difference between a true Indian curry and a Durban curry? Indian curries are usually colored yellow with turmeric and also yellow food coloring, and Durban curries are colored red with chillies, cayenne pepper, and red food coloring. Mr. Aiz, an expert curry maker from Durban, tells me that a Durban Masala curry powder has about 12 different ingredients. Without giving his secret recipe away, he told me that it includes: coriander, cinnamon, cumin, fennel seed, dried chillies, cayenne pepper, ginger powder and garlic powder, all ground up together. I include here a quick an easy equivalent for U.S.A. kitchens.

An Indian from India would probably complain that a Durban curry has “too many tomatoes” or “too many chilies.” However, to a Western palate the mix of a Durban curry, although sometimes fiery hot, is less perfumed than its Indian cousin. Some ethnic dishes, when taken out of their home setting do not always have the same appeal, but a Durban Curry even when not served under the African sun on a palm-lined bay is still sensuous and delicious.

If you visit Durban, stay a couple of miles north of the city at one of the magnificent beaches called Umhlanga Rocks. There is a beautiful old hotel right on the rocks here that looks back onto the bay of Durban. It is a great deal. The Hotel is The Oyster Box Hotel (www.oysterbox.co.za) is about $130 a night for a double room. You can have a delicious Durban curry here served on their outside terrace with a spectacular view of the entire coastline and the city in the distance.

The Ulundi Restaurant at the Royal Hotel, 267 Smith Street, opposite City Hall in downtown Durban has an authentic curry restaurant that brings back the old British Colonial days in Durban where curries are served in the gracious old colonial style. Contact: theroyal.co.za

The Jewel of India Restaurant at the Elangeni Hotel on the Beachfront, 63 Snell Parade. This restaurant is right on the ocean in Durban. Contact: 031-337-8168

Best time to travel? April, May and June are glorious.

My new book, Somewhere South of Tuscany, is doing well! You can view it on my website www.DianaGArmstrong.com.

Combine together in a bowl and store in the refrigerator or freezer.
Yield: 2/3 cup
Heat Scale: Hot 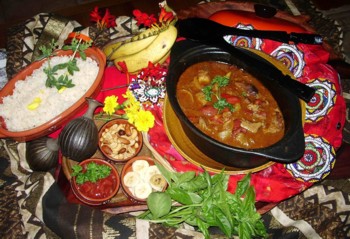 Here is a slightly Westernized version of Durban Curry developed for making in American kitchens!

In a heavy pan, preferably a cast iron casserole, heat the oil and add the onion, garlic, ginger and Durban Masala. Saute gently until the onion is a little brown. Now add the meat and cook over a medium high heat until the meat is brown, turning frequently. Now add the remaining ingredients except the cilantro. Stir gently and bring to a boil. Cover tightly with a lid and place in the oven at 225 degrees F. for at least four hours. Re-season and if necessary thicken with a little flour and water. Garnish as desired and serve with white rice, chutney and sambals.
Yield: 8 Servings
Heat Scale: Hot

This recipe comes from a friend in Durban who always makes an excellent curry. It is important when browning the onions to get them just right. Not brown enough and the curry will be insipid and too brown, the curry will taste burned. Do take time with this first step of the recipe.

Heat the oil in a heavy based pan and cook the onions until they are golden brown. Add the spices, ginger, garlic and tomatoes and allow to simmer for five minutes. Add the chicken and season to taste and cook for 30 minutes stirring at intervals. When the chicken is nearly cooked add the cardamom and frozen peas and simmer for 10 minutes. Garnish with cilantro and serve with rice, chutney and sambals.
Yield: 6 to 8 servings
Heat Scale: Medium

Samoosas are small pastry triangles filled with meat and vegetable curry. They are much more palatable than their counterparts from India, which are often stuffed with peas and potatoes. They are without a doubt the most popular appetizer at any casual gathering throughout Durban. Make ahead and freeze uncooked. They can be cooked straight from the freezer until toasty brown.

While you are making the filling, defrost the pastry sheets. In a heavy pan, heat the oil. When hot add the onion and garlic and stir until golden brown. Add the curry powder and combine. Now add the ground beef and cook until the beef is brown. Add the frozen vegetables and the beef bouillon, cover and cook for thirty minutes. Now add the flour mixed well with the cold water and stir until the mix returns to a boil. Chill for thirty minutes for easy handling.

Cut each sheet into equal parts of three down and three across. This should make nine samoosas per sheet. Spoon a teaspoonful of the chilled curry mixture into the middle of each square and fold over to make a triangle. Pinch closed with fingers or a fork.

Diana Armstrong is a cookbook author, culinary consultant, and travel writer. She and her husband divide their time between Denver, Colorado and Umbria, Italy.