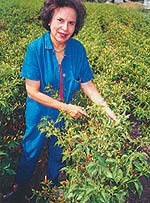 Emma Jean Cervantes stands at the edge of the field of red and green cayenne peppers in the Mesilla Valley of New Mexico. She watches as harvesters, some of whom have worked for her family for many years, gather the shining red peppers and place them in hoppers for transportation to the processing plant. She smiles as she says, “Just think, these peppers will be sent all over the world. I wish my father could see this.”

The Queen of Cayennes

Emma Jean is the president of Cervantes Enterprises, Inc. in La Mesa, New Mexico, a small farming community south of Las Cruces. The grandmother’s company has been growing chile for four generations and has become one of the leading agribusiness in southern New Mexico. In addition to growing many varieties of chile, they produce millions of gallons of chile mash for the domestic and international hot sauce industry. The farm grows a variety of peppers for seed companies and has experimental plots such as tabasco peppers for the McElhenny Company, producers of Tabasco Sauce, with whom Cervantes has a long standing relationship.

In addition to her business, Emma Jean shares her expertise with other organizations. She is chairperson of the New Mexico Chile Pepper Institute, member of the USDA National Agriculture Research and Education Advisory Board and was recently appointed to a second three year term by the Secretary of Agriculture.

Cervantes Enterprises also grows other crops including pecans, cotton, onions, alfalfa and pumpkins. Not too bad for a farm operation that her grandfather started in the early 1900s with a few fields and land that mostly consisted of barren desert hills. Through years of working the land, the Cervantes’ 1,500 acre farm has become one of the most innovative and efficient operations in the Southwest.

At their nearby mash plant, a long line of trucks were waiting to unload. Some were from Cervantes own fields, some were from other farmers in the Mesilla Valley, and some were from Mexico. All were loaded with cayenne chile. The chile was unloaded quickly, placed on conveyor belts where they are washed, cleared of culls, and then ground up in large hammer mills. Then ground mash is mixed with salt and/or vinegar as required by the individual customer. The mash is placed in 21,000 gallon fiberglass tanks were it is held until loaded in tanker trucks that deliver the mash to customers, or it is piped to a rail siding where the mash is loaded into large rail tank cars. A significant amount of product is also loaded in tamper-proof barrels for shipment, through the Port of Houston, Texas, to international destinations such as Saudi Arabia. The Middle East is a big market for the mash because many countries’ citizens have fallen in love with hot sauce. Legend holds that oil rig workers from Louisiana introduced cayenne hot sauce into the region, where it has spread–well, like wildfire.

The Cervantes operation also make mash from jalapeños, yellow hots, habaneros, and peri-peri chiles, most of which are grown on their farm. Depending on a number of factors, they try to grow at least 40 percent of their needs, and can grow up to 60 percent. All of this mash is manufactured into many different brands of hot sauce–as many as 1,000 brands are produced in the United States alone.

Cayenne pepper is the lingua franca of chile. It one of the oldest known varieties of chile and was introduced into the Old World in the early 1500s. It has been taken around the world and is grown in Europe, Africa, Asia, and in South, Central and North America. Cayenne is the basis for most hot sauces or is used in many commercial sauce recipes with other chiles. Much of the Cervantes cayenne used in sauces is grown on contract, both in the U.S. and in Mexico. Cervantes Enterprises provides seed to their contractors who must grow the chile to certain specifications including strict controls on the use of pesticides and herbicides. All shipments from Mexico must meet USDA standards and are checked at the border. So the trail begins in Mexico and New Mexico and ends in various countries around the world. But sometimes the end of the trail is closer to the beginning than you might think.

What’s a Mesa, Arizona Certified Public Accountant with a knack for inventing a tasty hot sauce to do when all of his friends want a sample? The year was 1987 and Bill Marco loved to barbecue, but couldn’t fine a sauce that suited him. So he began to experiment with ingredients and came up with a sauce that did the job. He became well known for his sauce and decided to manufacture some for local distribution. In 1989, grocery stores in the Phoenix area began carrying Arizona Gunslinger Smokin’ Hot Barbecue Sauce.

The brand now covers twelve products sold nationwide and in several foreign countries. Bill Marco is still a CPA and serves as a consultant to major industries. But his heart is with his hot sauce business which, he says, keeps growing and growing. And he uses about 20,000 gallons per year of the chile mash from Cervantes Enterprises. “I get the mash in tamper-proof barrels and pick up a load about every month,” he said. I bring empty barrels and take home full ones.”

His sales are all by word of mouth except for his Christmas Catalog, which is sent all over the world. He does not sell his product retail, but sends the catalog to retail outlets, distributors and brokers. “We try to develop one new product per year–our latest is a special hot sauce for buffalo wings, and it is surprisingly popular,” he said. His products sell to several grocery chains including Albertson’s, Giant Eagle, Kroger, Quality Food Center (QFC) and Thrift Way.

“We have never had a sales force,” said Bill, “but if we continue to grow I will have to have a sales force and do some promotion. We have placed ads in trade journals, such as Fiery Foods & Barbecue Magazine but have never done any really serious promotion–everything has been word of mouth. We are currently selling product in Canada, England, Singapore, Japan and France, through distributors and brokers.”

“We are now producing an average of 2,500 cases of sauce and other products per month of our brands and about 2,500 cases of products that we co-pack, with seven full time employees,” he said. “We produce 30 private labels which are a significant part of our business. We are planning to increase our production capacity.”

When asked about the future of the hot food product business, Bill says he sees nothing but growth, particularly in Europe. “The new products must be moderately hot, and have a rich flavor,” he said. “A product that is superhot with a catchy name doesn’t get it any more. I recently read that Saudia Arabia consumes about eight gallons of hot sauce per capita–much of which they manufacture themselves from U.S.-made mash. We are a niche company and our objective is to keep our niche,” he said.

“One of my advantages is that I am a CPA with a great deal of business experience. Having to work with city, state and FDA inspectors; fill out forms of every kind relating to international shipping, and all other aspects of business is a critical part of the operation. We run a lean, tight business. Hot sauce is no longer a fad–all of the collectors have bought their one bottle of our sauces. Our challenge is to make a product that people the world over want to use in food preparation,” said Bill.

So the cayenne trail has at least two branches. One is the mash that is sent to countries where companies there turn it into hot sauce. The other branch leads to places like Arizona and Louisiana, where the mash is made into hot sauce that then is exported to even more countries in its finished form.