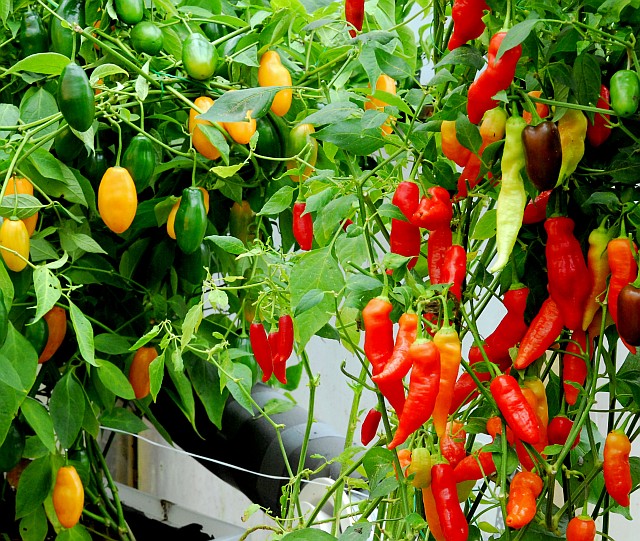 I have been growing chiles for ten years and am always surprised to hear other growers complain about birds, squirrels, bad roots, bacteria, viruses, weeds, flower drop, blossom end rot, and insect damage. I don’t have these problems because I grow my chiles in a hydroponic greenhouse. I use no herbicides, no pesticides and no fungicides, which has its benefits in an era when organic produce is being rewarded in the marketplace as well as in the human body. Yes, I have had some comments from organic gardeners who say that the hydroponic nutrients I use are chemical and not organic. I point out that all nutrients used by plants in soil or hydroponics are the same organic chemicals regardless of their physical appearance.

The computer controlled drip irrigation systems supply all the water and nutrients needed to maximize crop production. More than thirty tons of fruits and vegetables grown each year at “The Land” are served in Walt Disney World restaurants, including various peppers.

To me, it is obvious over time that plant problems relate to either dirt or atmosphere and their contact with chile plants: I eliminate those possibilities by using hydroponic techniques. Hydroponics is the science of growing plants without soil using an inert medium (sand or gravel) and a water and nutrient solution containing all the elements required by the plant for normal growth. One of the primary benefits of hydroponic gardens is that it requires approximately five percent of the water required for conventional farming, which makes it particularly attractive to chile growers in arid climates. There are many types of commercial hydroponic gardens with many different names, but the basic system applies nutrients to the roots of the chiles in a water solution. And this is hardly a new technology–hydroponic techniques have been used for centuries.

Large commercial greenhouses are operating in virtually all climatic regions, growing both flowers and vegetables. In Arizona, there are more than 25 acres of hydroponic greenhouses. In Colorado, greenhouses specializing in hydroponic tomatoes attach the plants to wires, which enables them to grow 40 feet tall, bearing tomatoes every few inches. There also are many large greenhouses in the Persian Gulf, Israel, The Philippines, The Netherlands, India, Hawaii, Australia, New Zealand, Spain, South Africa, Baffin Island, and the Carribean islands. The most successful hydroponic market crops are tomatoes and cucumbers. Cornell has a hydroponic greenhouse that raises lettuce for local markets.

In my small greenhouse, I control relative humidity, temperature, light level, and photoperiod (the relative length of night and day). I control the nutrients nitrogen, phosphorous, potassium, and the pH level by measuring and adjusting daily. My greenhouse lights are high pressure sodium and metal halide lamps that give a fairly accurate reproduction of sunlight, and I light to 20 to 30 watts per square foot. There is also a translucent roof that admits sunlight, but, in upstate New York, winter sunlight is neither bright nor predictable. One of the benefits of an hydroponic garden is that all plant inputs, such as water, nutrients, lighting, ventilation, and pumping timing can be automated using inexpensive timers that can be purchased in any city or on the Net. 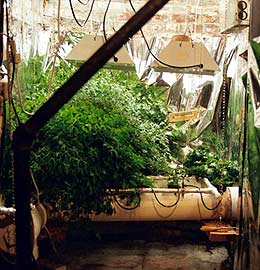 I keep a daily log of all plant parameters so that any changes in plant environment can be immediately corrected. The log also allows me to select good chile plants and seeds from various suppliers and to select the best nutrients and additives from suppliers

My greenhouse is an old coal chute to the basement (unknown to those who don’t have cold winters) with translucent panels on the roof. The boiler in my house is in a common space with the greenhouse and waste heat from the boiler does some of the heating. I also have an electric heater that keeps a daytime temperature of 80 degrees F. and nighttime temperatures of 65 to 70 degrees F. With lighting at 20 to 30 watts per square foot, waste heat from the lights does much of the heating. As the greenhouse is below grade, summer temperatures can be controlled by ventilation with a small fan, and I have never seen the greenhouse go above 95 degrees F. in the summer even when it’s hotter outside.

The water system is a recirculating one that operates when the lights are on, and the nutrient mix is a commercially available 3-part liquid. The pH and nutrient concentration should be measured and adjusted daily and good meters are readily available. Getting water quality under control is critical to hydroponic gardens and easy to do.

The hydroponic nutrient is a mixture of concentrate and water in proportions that come with the nutrient mixture. I use a three-part liquid mixture from General Hydroponics whose nitrogen-phosphate-potash is 5-0-1 for starting, 2-1-6 for growing, and 0-5-4 for blooming and fruiting. The mixture contains all the micronutrients necessary. There are other liquid mixtures that vary from these proportions very little. The water/nutrient mix is kept in the reservoir at 0.85 gallons per plant site; that is, if you have 12 plants, there will be a 10 gallon water/nutrient mixture in the reservoir. Dry nutrients are harder to use and control than liquids. The nutrient is pumped through emitters to the plant roots at the rate of 10 to 15 gallons per hour per plant. Algae is a problem with nutrient mixture only if light is allowed to reach it directly. All my plumbing is opaque, the reservoir is in a dark place, and the grow rocks don’t get wet enough to grow algae.

Hydroponics outdoors will be much the same as in a greenhouse except that the sun is substituted for grow lights, the relative humidity (RH) percentage and temperature control will depend upon climate, and algae control will become much more difficult. As it is difficult to keep the sun off all parts of the system outdoors, the reservoir in particular will grow algae. Outdoors, it is imperative that all components of the hydroponic system be opaque. There is no water treatment or filter that will remove algae from water that I know of.

I do all chile seed germination in rock-wool cubes in a moisture-tight container that is placed on the domestic water heater in the cellar, where the temperature is never below 80 degrees F., and my germination success is very high, greater than 85 percent even with wild chile seed such as piquins and chiltepins that are notoriously difficult to germinate.

After the seeds have germinated, I place the rock-wool cube in the grow cup and fill around the cube with expanded grow rocks. I place the cup in the pipe, make sure the valve is opened to the site and go away. With new seedlings, I tend to increase nitrogen to get some plant growth. I clone frequently as I have some favorite chiles that I have selected for plant size and fruit production. I usually clone the branches of mature, fruiting chiles by slicing the stems on the diagonal with a sterile razor blade and place them in sterile rock-wool in the cups until they have rooted.

Then I increase the phosphorus level to get the plant to flower without growing tall. When the chiles flower, I increase the phosphorus level even more to assist the fruiting. After the chiles have ripened, I pick them and prune the plant, both the roots and stem. I repeat this process for a couple of years until the yield starts to fall off, and then replace the plant with a young plant grown from seed, or with a clone from a younger plant.

A hydroponics system will clone almost any plant I have attempted. I have a fellow gardener who has been trying to reproduce a sterile hybrid Father Hugo’s rose for 30 years unsuccessfully by air and soil cutting propagation. In August of 2002, I took an axial slip, put it in a rock-wool cube, placed it in a grow cup with grow rocks, put it in the hydroponic garden and, three months later, replanted to soil a rose with a very nice root ball and new growth on every branch. Cloning is fairly simple with hydroponics, but there are some chiles that are very difficult to clone, such as piquins, and I don’t know why.

I began growing chiles in an hydroponic greenhouse so that I could have the benefit of the perennial nature of all chiles, but I had a very small growing area and wanted to maximize production. Plants need soil only for the reserves of moisture, nutrients, and adequate support of the main stem. Raising chiles in a sterile growing medium (I use grow rocks) where there are no reserves of nutrient allows me to give plants the precise amount of nutrient to maximize growth or fruiting. Precise nutrient application allows a better chile plant quality and pod quantity than soil-grown chiles. I think, and have some support from agronomists, that the reason my chiles grow so well without pathogenic or insect attacks is that the plants are never stressed. The chiles always have enough water, light, and nutrients and are never attractive to those evolutionary forces that kill the weak. Here are some of the chiles I’ve grown: hydroponically. 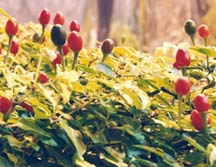 Chiles grown hydroponically can get quite large if they are allowed to grow perennially, but both roots and tops can be pruned easily to restrict plant size. Changes in nutrient mixture also helps to restrict plant size: if a chile is making too much foliage, I cut back nitrogen and increase phosphorus. Foliage can also be controlled by reducing the daylight portion of the photoperiod, but chiles are pretty much day neutral and I run a constant photoperiod whether the plant is growing or making fruit. I don’t plant poblanos, habaneros, jalapeños and other large chile plants because they take up too much room and my greenhouse is rather small.

My favorite hydroponic chiles for growing and eating are piquins and chiltepins because I like the chile size, shape, flavor, and heat. I keep a bottle of dried chile on the kitchen table and use them like the Mexicans use them: I take out the number of chiles I want and crush them on my food. It’s surprisingly hard to control dosage with habaneros and larger peppers and the heat levels from different parts of the large pods are not consistent. I germinate the larger chiles in the hydroponic unit and plant them outdoors for the summer in dirt after they have begun to fruit in hydroponics. This creates lots of very healthy fruit and the plant has no transplant setback .

Bolivian rainbows are a very showy plant that is too large for my greenhouse, and they get rave reviews from people who are unfamiliar with chiles.

Maintenance of the System

It goes without saying that a hydroponic greenhouse must be kept clean. I use municipal water treated with 500 to 1000 parts per million hydrogen peroxide for the nutrient mix. Hydrogen peroxide has the same function as chlorine in hydroponics–that is, it kills undesirable organics, but goes into the atmosphere from a liquid in about 2 hours and leaves no residue in the water; the same cannot be said for chlorine, which is residual and may harm plants if the concentration is too high.

My hydroponic set-up was designed to fit a pre-existing area in my cellar and is very specific to the greenhouse. This system is an hybrid system; that is, it is hydro/aeroponic. The plant roots are suspended in air and bathed by nutrient solution which drains back to the reservoir. There are some publications dealing with hydroponic hardware, but the commercial systems’ advertising on the websites below will give enough information to build your own system.

There are many suppliers of hydroponic systems, components, and nutrients and the following is a list of suppliers that I have used successfully.