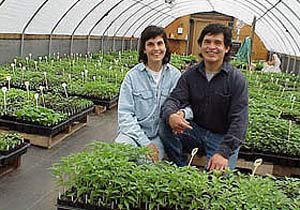 Editor’s Note: Janie and Fernando have been long-time supporters of the Fiery Foods & BBQ Centra; and our other chile-related enterprises, and loyal advertisers.  This article was written in 2008, so there have been a lot of changes, including hundreds of varieties of tomatoes and eggplants.  Go the their website here to get all the latest information about Janie and Fernando and the varieties of chiles now available.

Ask anyone where you’re likely to find the largest variety of chile pepper plants in the United States and you’re sure to obtain answers like New Mexico, California, Texas, and the like. But the answer is in New Jersey, the aptly named Garden State. Cross Country Nurseries, located in serene and rural Kingwood, boasts the largest variety of chile pepper plants grown by any purveyor in the country: 445 and growing. “I’ll have over 500 in the spring of 2003. My ultimate goal is to hit 1,000,” declares Janie Lamson, who owns the 54-acre farm with her husband, Fernando Villegas.

Janie is a native New Jersian while Fernando hails from Oaxaca, Mexico. Janie’s family came to the Kingwood area in the early ‘80s with the intent of engaging in some form of horticultural enterprise. They began growing Christmas trees but the clay-rich soil thwarted that endeavor since it is not conducive to cultivating many types of plants. In 1985, they switched to perennials, ornamental grasses, and ferns. They produced more than 750 varieties, mostly for the landscape trade. But in 1993, Janie’s brother handed her six packages of hot pepper seeds and asked her to grow them for him. This hot idea blossomed into their current enterprise. The perennials were eventually abandoned and now Janie and Fernando’s sole focus is the growing of chile peppers. All 445 varieties can be purchased as live plants ready for transplanting into the home garden, or just the pods themselves are available from 75 of the 445 varieties. If you cannot visit the farm yourself, Cross Country can ship anywhere in the United States. 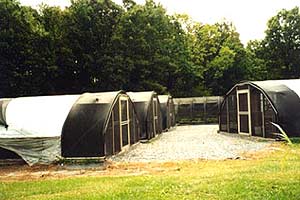 Outside view of greenhouses

Cross Country’s plants are grown from seed beginning in January. They are started indoors on heating mats under lights. This provides for optimal control of the germination environment and uniform quality in the seedlings. Three weeks later they are transferred to a greenhouse. After a week of acclimating to their new environment they are transplanted into two and a half inch pots. One month to six weeks later in April, they are ready for shipment.

Chile peppers are tropical plants and very sensitive to cold. Janie warns about transplanting them too early, depending on the area of the country you live in. Naturally, an early frost can kill the plants or at the very least, significantly stunt their growth. However, eschewing an early frost is not enough. The ground must reach a certain degree of warmth before transplanting or the pepper’s development and eventual harvest will be curtailed. Very generally speaking, this means planting in early May for the southern part of the country, mid to late May for the central U.S., and possibly June for the northern sections. 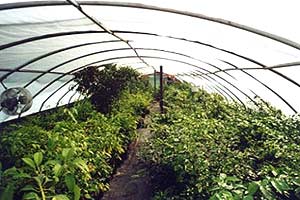 Planting sooner, even without a frost, will not give the plants a “head start.” Interestingly, chiles transplanted in June will grow faster and provide more fruit than ones transplanted in May. The most prudent course of action is to time delivery to coincide with the best time to plant for your area.

Cross Country Nurseries buys seeds for many of their plants. However, seeds for some chiles, particularly the more exotic ones, are not always available. To ensure a yearly supply of these chiles, a special greenhouse called the “motherhouse” is maintained. Seeds from these varieties are harvested each year and planted in January along with the purchased seeds.

There is also a special outdoor field where the aforementioned 75 varieties of chiles for harvesting are maintained. These are some of the most popular chiles for customers who wish to purchase just the pepper pods and not the live plants. There is a dazzling array of shapes, sizes and colors. There are Aji Omnicolor peppers in yellow, orange and purple, seven inch-long, bright red Aci Sivri, a Turkish cayenne, bright yellow Thai peppers, and Lantern chiles; bright orange peppers shaped like lanterns. The field also contains their four top sellers: ‘Red Savina’ habaneros, ‘Chocolate Habaneros’, ‘Devil’s Tongue’, and ‘Fatalii’. 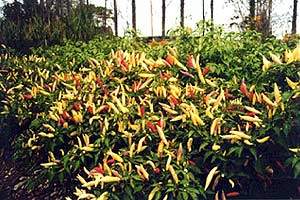 ‘Aji Omnicolor,” grown out for pods

‘Red Savinas’ are listed in the Guinness Book of World Records as the hottest pepper on earth. However, a study by the University of New Mexico awards the crown to the ‘Chocolate Habanero’, which derives its name from its brownish color. The ‘Devil’s Tongue’ pepper, according to Janie, was “discovered” growing amongst other habaneros in Pennsylvania. Its exact origins are unknown but it is clearly in the habanero family based on its taste and heat level. It is a two to two and a half inches long by one inch wide–a wrinkled, yellow pepper. The ‘Fatalii’ is an African variety, similar to the ‘Devil’s Tongue’ except somewhat longer, and also a habanero relative. These four peppers are the favorites for one very simple reason: they are the hottest. “People want hot,” explains Janie, “The mild varieties do not sell as well.”

A pepper’s heat level can vary from year to year and from location to location. Genetic makeup, climatic changes, soil conditions, and numerous other factors can affect a chile’s potency. It’s entirely possible for a ‘Red Savina’ habanero from one location to be hotter than a ‘Chocolate Habanero’ from another and vice versa. It must also be remembered that at this heat level, the differences are almost immaterial.

The number of types of chile peppers is constantly growing. The main reason for this is hybridization. Sometimes this is done by design. But frequently the actions of insects, birds and other natural forces can cause chiles to cross-pollinate. New varieties are then discovered as the aforementioned ‘Devil’s Tongue’. Janie and Fernando have also visited a number of Caribbean nations in the quest for new peppers. The motherhouse currently holds close to 200 new varieties from multifarious sources that are being test-grown before being offered for sale. 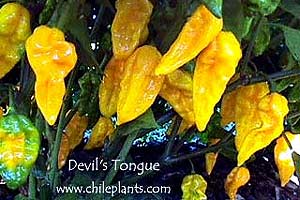 One of the many chile pictures at the chileplants.com Web site

Cross Country exclusively employs organic means to fertilize their plants and control for pests. Ladybugs, among other insects, are released in the greenhouses to eat aphids and otherunfriendly pests. A small man-made pond in the motherhouse assists in maintaining the high humidity that repels spider mites. While perusing one field of peppers we came across a tomato hornworm resting on a ‘Peruvian Serlano’ pepper plant. The worm was infested with wasp eggs that will hatch into larvae that will parasitically eat and eventually kill the worm. Wasps lay their eggs on the worm and serve to naturally control this highly destructive insect that can decimate the leaves of the pepper plants. Two particularly difficult pests to control are not insects. Deer eat the leaves of the chile plants and mice, believe it or not, actually eat the pepper pods and especially the seeds.

Fish emulsion (ground up fish) and seaweed are utilized as fertilizer. Fish emulsion is high in nitrogen and promotes strong growth and deep green leaf development. Seaweed is high in potassium (beneficial for the roots), and contains many other micronutrients and serves as a “multivitamin.” Three ponds located right on the farm provide irrigation.

Cross Country Nurseries is located at 199 Kingwood-Locktown Rd. in Kingwood, New Jersey. They can be reached at 908-996-4646 or at their website at www.chileplants.com. The website contains beautiful color photos of all of their peppers. They are open to the public April through June. Shipping of live plants occurs during the same months, and fresh pepper pods in September.