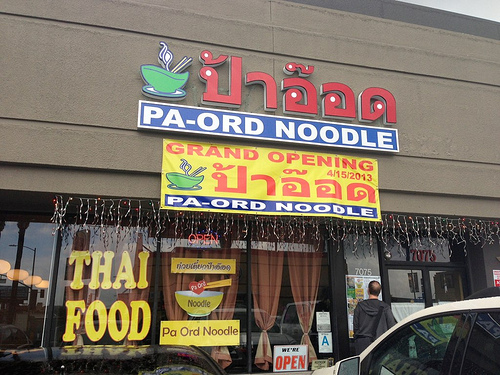 Brightly lit signs in foreign script barely faze passersby in multi-ethnic Los Angeles, but in Thai Town their message is impossible to resist. They beckon to locals and visitors alike; people come here every day looking for ethnic groceries, a unique cultural experience, or just a late-night meal on the way back from the bars along Sunset Strip.

Tucked between the apartment buildings and mini-marts lining the boulevard are some of the best ethnic restaurants that this city has to offer, and some of the most authentic Thai food anywhere. In fact, with the exploding popularity of Thai food, it’s not surprising that the restaurants and noodle shops in Thai town draw most of the visitors here. Some come for the Thai video stores and textile shops, but most are looking for the food that the area is known for. There are so many good choices that you almost can’t go wrong; pick one and stick with it, and you won’t be sorry.Situated on the eastern end of Hollywood boulevard between Interstate 101 and the neighborhood of Los Feliz, L.A.’s Thai Town is the only one of its kind in the United States. Dozens of restaurants, video stores, shops and markets cater to mostly Thai customers, providing a glimpse into a bustling world of immigrant culture in the West Coast’s largest city. Despite its size and unique status, Thai Town is undoubtedly one of the most fascinating and least understood of the many Los Angeles ethnic enclaves.

My favorite restaurant is the excellent Sanamluang Café, with its bright picture menu, great mix of local characters, and friendly staff. The prices can’t be beat, and neither can their signature dish Kuay Tiaw Uwayporn, or “General’s Noodles”—a sort of Thai “mixed grill” of the most common noodle ingredients, combined in a bowl of rich broth and skinny rice noodles. Other notable dishes here include a particularly good Tom Kha Kai, or coconut milk chicken soup, and Phat Khii Mao, fried noodles with basil. There are nicer restaurants, and more expensive ones, but I find myself driving past them on the way to Sanamluang.

One of the true institutions of Thai Town, Palms Thai, is just down the street. The food is excellent by anyone’s standards, but Palms is perhaps better known as the regular haunt of the amazing singing Thai Elvis, which is something that has to be seen to be believed. Between songs he banters with the crowd in Thai (he doesn’t speak English very well), and does his best to imitate the trademark posturing of The King. The show is gimmicky, but fun.While the flavors and colors of Thai Town are best experienced in person, most of the dishes and flavors are not hard to recreate and are definitely worth the effort. Even if you don’t live near Los Angeles, most of the ingredients are pretty easy to come by.Of course Thai Town offers more than just a good bite to eat and a funky show. Silom Supermarket, near the intersection of Western and Hollywood Boulevard, sells all the ingredients you need to create your own Thai masterpiece. One of the largest Thai markets in town, Silom serves as a little oasis of Southeast Asian culture for homesick Thais living in the city of angels. The store carries an astonishing array of Thai ingredients, snacks and supplies. If you get the chance, wander around for a while and don’t miss the Nam Phrik flavor Lay’s potato chips or Sangthip whiskey, a fiery high-proof liquor made from sugarcane. Nothing complements spicy curry better than Sangthip on the rocks with a splash of Singha soda.
Right around the corner is the best snack shop anywhere, Baan Khanom Thai. Their Khanom Kok isn’t quite as good as that served in the Silom garage, but you can get your fix seven days a week. There are very few other places in the U.S. where you can get Thai rice snacks, salty/sweet sesame banana chips and palm-sugar caramel candies. I like to wash down my usual sugar overdoses here with a can of pineapple (or lychee, if they happen to have it) flavored Fanta.The seller deftly pours the batter onto a greased iron mold heated over a Sterno burner, garnishing the cakes with a pinch of sweet corn or, oddly enough, green onion just before the batter hardens. Green onion is a bit unexpected on a coconut pastry, but I like to mix a few in with my usual corn to keep things exciting. In mango season, the same couple makes buckets of sweet sticky rice and ripe mango, a combination that is utterly irresistible.On Sundays, the parking structure behind the market takes on the air of a Bangkok street corner, as an older (and very friendly) couple serves up boxes of piping hot Khanom Kok, little moon-shaped cakes of coconut milk batter. Eager customers queue up to get their own box, but most don’t mind waiting—the process of making Khanom Kok is as entertaining to watch as the resulting snacks are tasty. Silom Supermarket also carries more fruits and vegetables than the average neighborhood supermarket. It is one of the few places in the city that carries luscious imported Thai fruits like hairy red Ngo (rambutan), Lin Jii (lichee) and Lam Yai. The store’s vegetable section merits at least a look too, even if you have no need for Fak Yao (long beans), spinach-like Phak Bung (morning glory) and tiny, pungent Thai garlic.

It may seem like cheating, but I like to use canned curry paste for this dish since it avoids the work of chopping and pounding that homemade curry paste involves. This dish takes its name from the northern Malaysian port city, but in Thailand the sauce is creamier and richer than the dry dark curries popular there.

To separate the coconut milk and cream, open a can of coconut milk, scoop the cream off the top and reserve.

Heat the oil in a wok or small saucepan over high heat. Add the curry paste and fry for one minute. Add 1/2 cup of the coconut milk and boil for another four minutes or until thickened. Add beef strips and cook until nearly done, then add the remaining coconut milk. Boil together until thickened slightly. Before serving, swirl coconut cream into the curry and garnish with lime leaves and sliced chiles. Serve with fresh white rice.

The vegetable sold as “morning glory” in stores like Silom is sometimes called “water spinach”—the leaves are slightly bitter, but taste absolutely perfect with a handful of burning red Thai chiles. The exact quantity of each ingredient in this dish is somewhat variable; I like to use approximately the proportions given here, but Sanamluang’s version is a little more salty and less spicy. I’m not sure where the name comes from, but perhaps the red chiles have something to do with it.

Rinse the morning glory and trim the thick stems. Leave water clinging to the leaves. Heat the oil in a wok over high flame until it begins to smoke. Add garlic and chiles and cook for just a second, then add the morning glory and Thai chiles. Add the fermented soybean sauce and keep the ingredients moving over the highest heat possible for two to three minutes more. Add the oyster sauce, fish sauce and sugar, and cook for another few seconds.

Yield: 4 servings as a side dish

I like the way the cooks at Ruen Pair prepare their Khii Mao or “drunkard’s noodles.” It is less elaborate than some, but I prefer its simplicity. This is a typical bar food dish in Thailand, intended to be washed down with buckets of Singha beer. Don’t be afraid to make it as spicy as you can stand—it will certainly be true to the original. Stir-frying noodles isn’t hard, but it does require a lot of oil. To minimize the amount of oil used, add a little at a time as you cook the noodles.

Slice the chicken breast into strips 1/4-inch wide. Heat the oil in a wok and add garlic. As soon as the garlic begins to cook, add the chicken and cook for a few minutes. Remove from heat and set aside, saving the oil. Stir fry the noodles in the oil with the soy sauce until cooked, then add the chicken breast. Mix together and add fish sauce, chiles, and basil leaves. Toss in a wok, remove from heat and add pepper. Serve with vast quantities of Thai beer.

“Holy” basil is widely available in Thai stores. The stems are purple and the leaves are pointed, distinguishing it from regular sweet basil. I actually prefer the flavor to “regular” basil—it’s slightly more bitter and fragrant, with a unique aroma. The basil doesn’t require much cooking, as too much heat makes it bitter and destroys the delicate flavor.

This dish is somewhat elaborate but definitely worth the effort. Creamy, rich and spicy at the same time, it’s no wonder that it is among the most popular dishes served at Sanamluang. The only unusual ingredient is galangal, which is a kind of Thai ginger with a pine-like flavor.

Bring the chicken stock to a boil in a large pot, adding the lemon grass stalks, galangal, and kaffir lime leaves. As soon as the stock begins to boil, add chicken, mushrooms, sugar, lime juice, and fish sauce. Add the coconut milk and chiles and cook for a few minutes longer. Remove from the heat and take out the lemon grass and galangal pieces before serving.

According to the waiters at Sanamluang, this noodle dish is named for the restaurant’s former parking attendant whose authoritarian ways were legendary. Any kind of mixed meat can be used, although to stay true to form requires leftover roast duck, beef meatballs and squid.

Soak the rice noodles in warm water for 15 minutes. Bring the broth to a boil in a large pot. Divide the noodles into four individual portions and dunk each into the boiling broth for a few seconds with a wire strainer basket before placing in four bowls. Divide and dunk the duck, sliced eggs, squid and meatballs in the broth and place on top of the noodles. Pour 1/4 of the broth into each bowl and serve hot.

1 cup sticky riceMangos and coconut milk are meant for each other, and sticky rice is the icing on the cake. Try to get yellow-skinned “Manila” mangos if you can—the flavor is stronger and more acidic than the green and red-skinned South American varieties.

Soak the sticky rice for several hours, then place in a bamboo steamer over a wok of boiling water until translucent and dry. A large stock pot with a bowl inside can be used as a substitute if the normal bamboo steamer is not available. Sticky rice is very hard and requires a lot of water to cook, so don’t let the steamer run dry.

Heat the coconut milk, sugar and salt in a saucepan over low heat until sugar just dissolves. Pour about half of the mixture over the cooked sticky rice and mix well. Add coconut cream to the remaining mixture and heat to a boil, then cook 5 to 10 minutes until thickened. Allow to cool. Place the rice in a serving bowl, top with sliced mango and drizzle with the coconut cream mixture. Serve at room temperature.