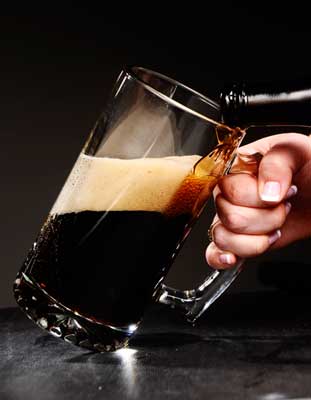 Recipes in this article:

“I’ll take a grilled piece of food over a sauteed one ninety percent of the time,” says Kent Rathburn, executive chef and an owner of Abacus, one of Dallas’ well known fine dining rooms. “I love to grill and I love grilled foods.”

Rathburn admits that some of his enthusiasm for grilling probably comes from his experiences tailgating at Arrowhead Stadium, home of the

the home of tailgating. Just about everyone brings a grill. Some people even trailer in huge smokers. Kansas City fans take tailgating very seriously and tailgating means grilling.” NFL’s Kansas City Chiefs. A Kansas City native and an avid Chiefs fan, Rathburn began tailgating when he was a child. He still returns home whenever he can to participate in the pre-game parties which, he says, are nearly as important as the football game itself.

When it comes to grilling, Rathburn’s a pro. At Abacus, where the menu emphasizes Pacific Rim cooking with an eclectic mix of Mediterranean, Cajun/Creole, and Southwestern dishes, grilling plays a key role. It’s also Rathburn’s method of choice when cooking at home, where he regularly fires up his gas and wood burning grills. “At home, I really enjoy grilling over hickory logs,” he says. “They produce a great flavor that’s totally different from what you get with hickory charcoal. And flavor is what grilling, or any kind of cooking, is all about.”

Recently, Rathburn has added a new flavor dimension to his grilling. He’s discovered that beer, long a staple at backyard cookouts and pre-game parties, is not just something to sip while waiting for the food to cook, but a versatile ingredient that can add a unique flavor to grilled foods.

Of course, chefs and home cooks in countries with a long tradition of beer making and drinking have been cooking with beer for centuries. Since immigrants from Germany, Switzerland and other European countries brought their culinary traditions with them when they came to this country, cooking with beer also is part of several regional American cuisines. But it wasn’t until micro-breweries and brew pubs began springing up all over the country that Americans began taking beer seriously as a complement to and a component in fine food.

There are no hard and fast rules about grilling with beer or pairing grilled foods with beer. But since beers vary in flavor and intensity, a few guidelines are helpful. “First and foremost, never use a beer you don’t like or wouldn’t drink,” Rathburn cautions. “Since beer isn’t much of a tenderizer, its primary use in grilling and other cooking is to add flavor. As the liquid cooks off, the flavor intensifies. If you don’t like the taste of the beer you’re cooking with, you aren’t going to like the end product.” 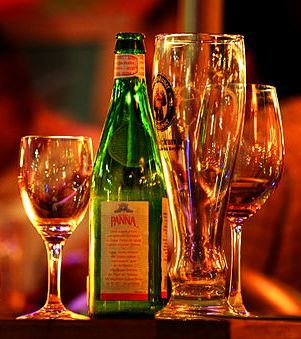 To choose an appropriate beer for grilling and for pairing with grilled foods, Rathburn suggests following the same approach you would use if you were cooking with wine: Think about whether the food is light or heavy, has a strong flavor, a mild flavor or just a little flavor. “Then,” instructs Rathburn, “match the depth of flavor and the heaviness or lightness of the beer to the food.” Venison, for example, has a very full, heavy flavor that needs a full-flavored beer. With it and other hearty game, Rathburn likes bock or stout. Both also are a good match for grilled beef, smoked pork and barbecue. For grilled pork, Rathburn recommends a pale ale.

Fish is favorite on the grill. Although most people think of fish as much lighter than red meats, not all fish are the same. For white fleshed, leaner fish, “you want to use a light and refreshing beer like a pilsner or a pale lager.” Tuna and other fish with a heartier flavor and texture can take a heavier beer. “With shrimp you can go either way. If you want a lightly flavored dish a pilsner is good. But you can also use a bock,” he says.

Chicken is another meat that does well with many different styles of beer. In his book The Barbecue Bible, author Steven Raichlen suggests using a lighter beer for mild flavor and a dark, bitter stout for a rich, malty flavor. Raichlen rubs a whole chicken with dry barbecue seasoning, places an open can of beer spiked with more dry rub in the cavity and grills it for about two hours for “the most succulent, moist, and flavorful barbecued chicken I’ve ever tasted.” The recipe, he says, was inspired by the Bryce Boar Blazers, a barbecue team from Texas.

Rathburn also uses Mexican beer combined with jalapeños, cilantro and lime juice in his Southwestern Beer Marinade which, he says, is great for pork, chicken, beef or game. Bock beer, one of his favorites, plays a starring role in Grilled Shrimp Fajitas with Beer Braised Onions. It’s rich flavor and color help caramelize the onions.

What’s the best way to get started grilling with beer? Try a variety; pick out the beers you like best and then match their flavor profiles with the food you want to grill. Rathburn admits that the key to any good recipe is the time-honored tradition of trial and error. Besides, half the fun of cooking with beer is tasting it first.

“You can serve this as chili in a bowl,” says Chef Kent Rathburn. “But I like it with flour tortillas, guacamole, cheese and sour cream and a full-flavored beer like bock or Belgian ale.”

Cut the sirloin steak into four pieces, each about 8 ounces. In a large bowl or shallow dish, combine the canola oil, lime juice, garlic, shallots, cilantro, pepper, jalapeño, and salt and stir well. Place the beef in the dish and marinate in the refrigerator for at least three hours, or overnight.

Prepare the grill. Cook the meat to medium doneness, about 6 to 8 minutes per side. Let the meat cool; dice to one half inch cubes. Set aside.

In a large sauce pot over medium heat, add the oil. Sauté the onions and garlic until translucent. Add the meat pieces; cook until most of moisture is gone. Stir in ancho chile powder, cumin, and coriander. Add the beer to deglaze the pot. Continue cooking on medium heat until the sauce starts to thicken and the beef is very tender. Add poblano chiles, salt, and lime juice.

To serve, top with green onions and cilantro.

This marinade is delicious with pork, chicken, beef, or game.

In blender or large food processor, place all the ingredients. Blend until smooth.

The nice thing about shrimp is that it cooks so quickly. If you’re hungry, you don’t have to wait long. You can prepare the onions ahead of time and reheat them on the grill. Or, cook them in an iron skillet on the grill just before you’re ready to serve them

Place in a blender or food processor the canola oil, garlic, shallots, jalapeño, cilantro, lime juice and tequila. Blend until smooth. Place the shrimp in a large bowl. Pour the marinade over the shrimp and marinate in the refrigerator for one hour.

In a large cast iron skillet, place the butter and melt over medium heat. Add the onion slices and garlic and sauté until the onions are cooked and caramelized, about 12 minutes. When the onions become dark brown the add beer and deglaze the pan. Continue cooking until beer has reduced and thickened around the onions. Season with salt.

Prepare the grill. Place the shrimp on the grill and cook, turning, until white throughout, about 5 minutes. Place onions on platter; top with shrimp. Spoon into floured tortillas to serve.

Serve these tasty sausages with grilled onions and peppers, cole slaw, and some crunchy bread.

In a bowl, combine the beer, onion, garlic and red chile. Place the sausages in a large plastic bag and add the beer mixture. Close the bag securely and marinate in the refrigerator for 6 to 8 hours (or overnight, if desired) turning occasionally.

Remove the sausages from the marinade; discard the marinade. Place the Italian sausage links on the grill over low to medium coals. Grill for 5 minutes. Add the Polish sausage links and bratwurst and continue grilling for 10 to 12 minutes or until juices run clear, turning occasionally. Serve with Sweet Hot Beer Mustard.

In a bowl, whisk together all ingredients, except the egg yolks. Cover and let sit for 30 minutes. Whisk in the yolks. Place in a double boiler over simmering water. Cook on medium-low until thickened, whisking constantly. Cool. The mustard will keep in refrigerator for up to three weeks.

Try this when you don’t have the time to do a brisket. It’s delicious and makes great sandwiches.

Cook the onions in butter in a small saucepan over medium-low heat until tender, about 10 minutes. Stir in the salt and chile powder. Add the beer and simmer for 5 minutes. Remove from heat and cool thoroughly. Place roasts in large plastic bag and add the cooled marinade, turning to coat. Close the bag securely and marinate in the refrigerator for 6 to 8 hours (or overnight) turning occasionally.

Remove the roasts from marinade; reserve marinade. Boil the marinade in a pot for 10 minutes. Place the roasts on the grill over medium coals. Grill for 30 to 35 minutes, turning and brushing frequently with the marinade. Roasts will be rare to medium in doneness.

Remove the roasts from grill, tent with aluminum foil, and allow to stand 15 to 20 minutes before carving. Carve across the grain into thin slices. Season with salt and pepper to taste.

You can also use Alaska halibut in this recipe, which is good with a rice pilaf you’ve made ahead of time and reheat on the grill.

Blend together all ingredients, except the green onions and salmon. Place the salmon in a shallow baking dish and pour the pour marinade over it. Cover and refrigerate for at least one hour. Remove from the marinade and transfer the salmon to a sheet of heavy-duty foil cut about 2 inches larger than fish all around; bend edges up to make lip around the fish. Sprinkle the green onions over the salmon.

Cook the salmon on a hot grill, but not directly over heat source (coals or gas). Cover the grill and open the vents. Cook about 20 to 30 minutes, until the fish is opaque and flakes easily.

A time-saving alternative to cooking a large pork roast, these chops have an Asian accent. The ginger gives them a nice bite.

Place the chops in self-sealing plastic bag and add the other ingredients. Seal the bag. Gently massage the bag to evenly distribute the marinade ingredients. Refrigerate for 4 to 24 hours.

Prepare medium-hot coals in a kettle-style grill. Remove the chops from marinade and discard the marinade. Place the chops on the grill directly over coals. Cover the grill and grill for 10 minutes, turning once.

Beer in a dessert? Why not? This is an easy finale to a grilled meal and great with fruit flavored beers.

Thread two pieces of pineapple and two mango chunks on each wooden skewer, alternating. Set aside. On top of the stove over medium-hot heat, bring the beer to a boil in a small saucepan. Cook until reduced by half. Stir in the butter, sugar, and mustard and continue cooking for two minutes.