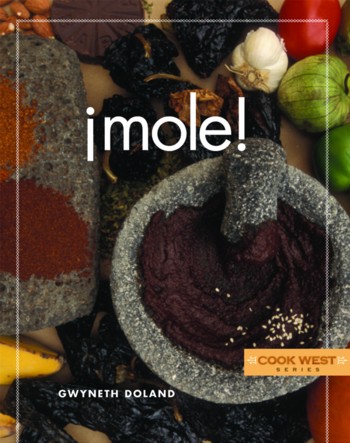 Many of us have encountered and come to love this complex, intoxicating dish, but relatively few of us know what’s in it (besides chocolate, in some versions) or how it’s made. That’s why we’re so excited about senior editor Gwyneth Doland’s new book, Mole! (Rio Nuevo Publishers, paperback, $12.95). Here Gwyneth shares a few of the recipes from the book to get you started on making mole at home.

The Spanish word mole comes from the Aztec word molli, which was used by the pre-Columbian indigenous peoples of Mexico to refer to the sauces they made by pounding dried chiles with seeds and nuts in giant mortars. The Spaniards brought to the New World many ingredients, especially spices, which were incorporated into the native sauces. Mole’s most famous ingredient–chocolate–is actually a minor player in a sauce that can have more than two dozen ingredients, including tomatoes, raisins, sesame seeds, whole cloves, and oregano. In fact, many moles don’t contain any chocolate at all! Chiles provide the structure and primary flavor for mole, providing not just heat, but fruity, smoky, sweet flavors. In Mexico, the many varieties of locally grown chiles give their moles a flavor impossible to reproduce. Luckily, these chiles are becoming more and more available, especially from Internet retailers.

Today, mole remains the most beloved dish of Mexico, and a different version is made by nearly every cook. There are no hard and fast rules about what’s called a mole and what’s not. The primary ingredients–especially the chiles–and the basic techniques are important, but pretty much everything else is up to you, what’s in your kitchen, and what’s in the market. 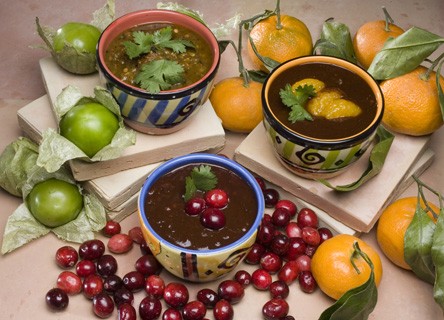 The Mole Sauces in This Article

Dried cranberries are not traditionally included in mole rojo, but I think the bright, concentrated flavor of the fruit fits perfectly. You can make a more traditional mole rojo with 1/4 cup red raisins instead of the cranberries.

In a saucepan over high heat, bring the stock to a boil.

In a cast-iron skillet over medium heat, toast the chiles on both sides until they soften slightly and become aromatic. Transfer the chiles to a medium-sized, heat-safe bowl and add enough hot stock to cover. Keep the chiles submerged with a small plate or saucer.

In the same skillet, toast the almonds, pecans, canela, cloves, and allspice berries until the almonds brown slightly and both nuts start to release their aroma. Transfer the nuts and spices to the blender.

Using a slotted spoon, transfer the chiles to the blender and puree, adding enough stock to make a thick sauce. Press the mixture through a fine-meshed sieve set over a large bowl.

Add the lard or vegetable oil to a large, heavy-bottomed saucepan or Dutch oven set over medium heat. Fry the mole for 2 minutes, stirring constantly, then add the chocolate and remaining stock and simmer 20 minutes. Season to taste with salt and serve.
Yield: About 5 cups
Heat Scale: Medium

This green mole is made with pepitas (roasted and hulled pumpkin seeds–look for them in the bulk aisle of your natural foods store). Versatile mole verde tastes great over chicken, pork, fish and steak.

Put the tomatillos and stock in a medium saucepan, bring to a boil, reduce heat, and simmer 15 minutes.

Meanwhile, in a cast-iron skillet over medium heat, toast the pepitas, cumin seeds, cloves, and canela until the seeds start to pop and turn golden. Transfer the seeds and spices to the pitcher of your blender and puree with about 1 cup of the stock from the tomatillo pot. With a rubber spatula, scrape the puree into a bowl.

When the tomatillos are done, transfer them to the empty blender. Add the jalapeno and poblano chiles, onion, and garlic, and puree, adding a little stock if necessary. Scrape the puree into a large bowl.

In the same skillet over medium heat, fry the pumpkin seed mixture in the oil until it browns slightly.

Meanwhile, add the cilantro and lettuce leaves to the blender and puree with 1 cup of the stock. Add the pureed leaves and the tomatillo mixture to the skillet and heat through. Serve immediately.
Yield: About 3 cups
Heat Scale: Mild to medium

The bright, herby flavors of mole verde contrast beautifully with the rich meatiness of flank steak. The leftovers taste great as a sandwich.

Using a mortar and pestle, crush the garlic and salt into a paste. In a small bowl, combine the garlic paste, cumin, oregano, black pepper, and olive oil.

Lay the flank steak on a cutting board and make a series of shallow, crisscrossed cuts on the surface of the meat; flip and repeat on the other side. This will help the marinade penetrate and keep the meat from curling on the grill.

Rub the meat all over with the garlic and herb mixture and put it in a resealable plastic container or large zippered storage bag. Allow the meat to rest in the refrigerator 2 hours or overnight.

Preheat your grill to high. Leave the meat in the refrigerator until just before you put it on the grill. Grill to medium rare, about 4â€“5 minutes on each side. Transfer the steak to a platter, cover with foil, and allow it to rest 10 minutes.

Meanwhile, in a small saucepan, reheat the Mole Verde.

In a small saucepan, combine the mole and mandarin orange segments, along with their juice. Bring the mixture to a boil, reduce heat, and simmer until thickened. Season to taste with salt.

Put each turkey breast between two pieces of heavy-duty plastic wrap and, using a kitchen mallet or similar blunt object, pound to a thickness of 1/2 inch.

Combine the coriander, cumin, salt, and pepper in a small bowl. Dust each piece of turkey on both sides with the spice mixture.

Add the vegetable oil to a cast-iron skillet over medium-high heat. Fry the cutlets until golden brown and crispy on both sides, 3 to 4 minutes total.

Look for Mole!, at your favorite local book store or online retailer. To buy an autographed or personalized copy, go here.