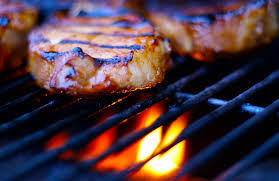 When I moved to New Mexico at age 30, I had already been grilling for twenty-two years, so it was fairly easy for me to master the ingredients and techniques of grilling and smoking Southwestern-style. That’s right, my father, Dick, taught me how to grill when I was eight and after I learned how not to burn the chicken, I was the main griller in the family. In fact, I still have the book I used in the old days, Sunset Barbecue Cook Book, first published in 1950. (It cost $1.95 when my father bought it in 1959.)

There were a number of outdoor cooking adaptations that I had to master after moving from Virginia to Albuquerque. First, I had to learn to cook with chiles, which were unheard of back East in those days. Because of variations in the flavors of the different varieties, I soon discovered that they could add many dimensions to the Southwestern Grill, particularly as part of a marinade, a baste, or a sauce topping. Next, I had to experiment with other Southwestern ingredients, including piñon nuts and pistachios (yes, we grow pistachios in New Mexico), cactus fruits, tomatillos, cilantro, Mexican limes, and jicama, to name just a few.

I had only grilled over charcoal before moving west, but I was not happy with the typical briquets and started experimenting with natural chunk charcoal, which I found to be far superior. Then I bought an Oklahoma Joe’s smoker, and my world really changed. Learning to smoke meats and fish was challenging, but there was plenty of time for drinking beer while practicing! I primarily used the woods grown here, namely pecan (New Mexico is the third-largest U.S. producer of pecans), apple, and apricot. I tried smoking with mesquite but soon learned that its smoke imparted an acrid flavor to the, so I just grilled with it and liked the hot flame it produced..

Eventually, when my charcoal grill fell apart, I did not replace it but rather used the kettle of the smoker, first with charcoal but later with the smoking wood and mesquite. Grilling over wood with no way to adjust the height of the grill or the intensity of the flame was the greatest outdoor cooking challenge I have ever faced, because you have to guess precisely when the coals are ready, and how long they will last. If you start too soon, the flames from the burning wood will char the meat, and if you wait too long, the coals will die out before the meat is cooked.

Finally, my friend Paul Bosland gave me a Weber gas grill as a gift, and I started using that for grilling and the smoker only for smoking. Many people turn up their noses at the thought of grilling over gas, but I like it because is so easy. Yes, sometimes the flames are not hot enough, but if you use the cover to increase the heat, you can get very good results. Gas grills are also handy for roasting chiles, tomatoes, and other vegetables.

The recipes that follow are just a few of my Southwestern grilling and smoking favorites. My long-time collaborator, Nancy Gerlach assisted in the recipe development. So grab a Negra Modelo dark ale, a few chiles, so high quality meat, poultry, and seafood, and fire up the grill!

There is no such thing as chicken or tofu fajitas because the word refers specifically to skirt steak that is marinated and grilled. This is actually a simple recipe to prepare, and it works best when grilled over mesquite wood, or natural charcoal with mesquite chips. The technique known as smoke-grilling is perfect for this meat, and flank steak can be substituted for the skirt steak. Tradition holds that fajitas were first perfected in south Texas in the 1960s and quickly became a staple for Mexican restaurants–and others–north of the border. It is a classic example of combining several methods to make tough meat more palatable: marinate it, grill it, and slice it thinly against the grain. Note: This recipe requires advance preparation.

Combine the ingredients for the marinade in a bowl and mix well. Place the steak in a glass dish and pour the marinade over. Cover and marinate in the refrigerator overnight.

Grill the steak over a hot fire until medium rare, about 10 to 15 minutes, or if you can measure the temperature with a probe, 150 degrees F. internal temperature. You can also check for doneness by cutting into the steak. Remove from the grill and slice thinly against the grain.

Quickly heat each tortilla on the grill. Serve the sliced steak wrapped in a tortilla, and topped your choice of of condiments among the cheese, sour cream, guacamole, grilled onions, barbecue sauce, salsa, and hot sauce.

Here is a delicious combination of ingredients from the Southwest –pine nuts, chile, and lamb. For an authentic, smoky flavor, grill them over mesquite wood or charcoal covered with mesquite chips soaked in water.

Combine all the ingredients, except the lamb, in a blender and puree until smooth. Paint the chops with the mixture and allow them to marinate for at least an hour.

Grill the chops, turning them occasionally until done, about 7 to 10 minutes a side.

The addition of cumin and chiles give these pork chops a wonderful Southwestern flavor. You can grill them over charcoal, gas, or wood. Note: This recipe requires advance preparation.

Combine all the ingredients, except the pork, and marinate the pork in the mixture for 4 hours or overnight.

Remove the chops from the marinade and grill until done.

Serving Suggestions: The remaining marinade can be boiled for a few minutes and served on the side as a sauce.

Grilled steaks no longer have to be just a piece of plain meat. Any type of fresh chile or combinations of chiles can be substituted for the jalapeños in this recipe. The stuffing can be prepared a day in advance and refrigerated. An hour before cooking, slice the steaks and fill with the chile mixture.

Saute the chiles, onion, and garlic in the oil for a couple of minutes, until just soft but still a little crisp. Remove, cool, and mix in the cheese.

Slice into the steaks from the edge, creating a “pocket” for the stuffing. Stuff with the jalapeño mixture and fasten the opening with a toothpick, if necessary. Season the outside of each steak with the black pepper.

Grill over hot charcoal to the desired doneness.

This simple dish yields a complex taste. Serve the turkey hot with the chile oil and a salsa on the side, or cold on a bolillo roll. You can substitute anchos or pasillas for the cascabels.

Heat the oil and saute the chiles and garlic until softened. Remove from the heat and add the oregano, salt, and pepper.

Split the turkey in half by cutting in through the breast and backbone. Brush the chile oil over the turkey and marinate for a couple of hours at room temperature.

The concept of marinating chicken in a spicy fruit juice and then char-broiling originated in Mexico and is becoming quite popular throughout the Southwest. The chicken is served with warm corn tortillas, fresh salsa, and a side of pinto beans. Customers then remove the chicken from the bones, place it in the tortilla, top with salsa, and enjoy. Note: This recipe requires advance preparation.

Saute the onion, garlic, and tomatillos in the oil until soft. Add the remaining ingredients, except the chicken, and simmer for 10 minutes. Place in a blender and puree to form a sauce.

Marinate the chicken in the sauce for at least 3 hours.

Grill the chicken, until done, basting frequently with the sauce.

Although many Southwest barbecues and grilled meats utilize mesquite, it is not the only aromatic wood to use–experiment with pecan, apple, peach, and grape clippings. If you use charcoal for the main fire, be sure to soak the wood for an hour in water before grilling. Note: This recipe requires advance preparation.

Cut the wing tips off the quail, then split the birds down the back and remove the backbone. With a knife tip, remove the rib bones from each quail, and then slice open the thigh bones to remove the bones and joint, taking care to keep the skin intact. Open up each quail and press the legs together, securing them with toothpicks.

Simmer the chiles in water for 15 minutes. Place the chiles in a blender along with the olive oil, orange and lime juices, and the garlic and puree. Pour this sauce over the quail and marinate for an hour.

While the quail are marinating, prepare a medium-hot charcoal fire and preheat the oven to 350 degrees. Brush each goat cheese round with olive oil, coat with corn bread crumbs, and bake for 5 minutes. If you start the baking just when the quail are being grilled, both should be done at the same time.

Add the grape clippings to the coals, arrange the quail skin side down on the rack and grill for 2 minutes, taking care not to burn them. Turn the quail and grill for an additional 2 minutes.

If the skin is not yet crisp, turn once more and grill for an additional minute.

Serve 2 quail on each plate with a goat cheese round and garnished with the salsa.

Mesquite wood smoke is absorbed by the fish while it grills, imparting a distinctly Southwestern flavor. Care should be taken not to overcook–or burn–the fish.

Saute the chile and onion in the vegetable oil until soft. Add the remaining ingredients, except the fish and olive oil, and simmer for an additional 10 minutes. Place the mixture in a blender and puree until smooth. Keep the sauce warm.

Prepare a fire of mesquite wood, or a charcoal fire with mesquite chips added. When the coals have burned down to a medium heat, rub the fillets with olive oil and grill for four or five minutes per side, turning once. Turning more often could cause the fillets to fall apart.

Place the fish on individual plates, pour the sauce over the top and serve.

The heat of this spicy kebab is controlled by the number of jalapeño strips used. Milder fresh chiles can also be substituted to tame down this dish. Note: This recipe requires advance preparation.

Place the tomatillos on a hot skillet and roast for a couple of minutes or until blackened on all sides.

Saute the onion and garlic in the oil until soft.

Place the tomatillos, onion mixture, lime juice, and black pepper in a blender and puree until smooth. Stir in the cilantro.

Marinate the shrimp in the mixture for an hour. Remove and thread on skewers along with the chile strips. Place the marinade in a pan and heat.

Grill until just done (a few minutes on each side) and serve with the sauce on the side.