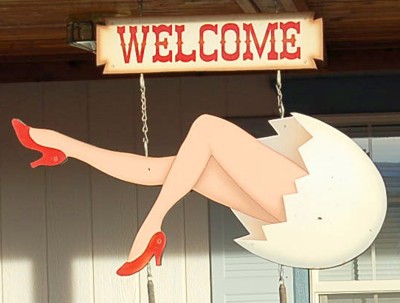 As Witnessed by Burro Bob Wiseman

The shiny-varnished placard proudly proclaimed WELCOME. Swinging from the sign, on polished brass chains, was a huge white eggshell with a pair of shapely legs, sporting exotic red stiletto heels.

WELCOME to what? This was not an Arkansas chicken farm but there were some nice – ahem – tender chicks at the edge of the pool along with a whole bunch of people; odds and ends of folks from all walks of life.  Somehow, though, you knew this was not your ordinary chili cookoff.

The setting was not at a village green, a shopping mall parking lot, or in front of a bar; this cookoff was at a cat-house–a legal bordello better know as the World Famous Chicken Ranch Brothel.  And I’m here with my wife!  Now, how’s them apples, pardner?

Coyote Jodi and I have cooked at some unique places–Hawaii, Mexico, all over the western U.S. and in all types of weather and conditions, even at a nudist colony or two–ahem, clothing optional. But, at a brothel, this was a first. Scouts honor, it really happened.

How did all this come about? Last year the International Chili Society (ICS) was approached by Wayne Bridges the CEO of the Las Vegas-based Sin 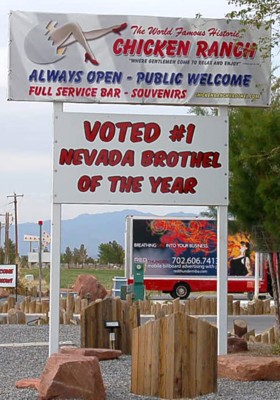 City Chamber of Commerce (no connection to the Las Vegas C of C). He inquired about hosting a sanctioned cookoff at a brothel near Pahrump, Nevada.  The cookoff would be held in conjunction with their annual golf challenge. The powers that be at the ICS thought it would be a grand idea and the cookoff was approved. The date was set for a Saturday early the following May.  Word quickly spread and soon inquiries bunched up at the Sin City email address.  Chili cooks all over Chilidom were stunned.  A cookoff at a WHAT? …. No way…… Yes, way!

There was a conflict; a major cookoff was also scheduled that same weekend, the California State Championship held annually at San Bernardino.  The Cal State is always a huge draw for some of the best red, green and salsa cooks, including many chiliheads from Nevada. The price of gas, though, forced most of us to change our minds–the Chicken Ranch cookoff was ideal and it would be a lot closer and cost a lot less. After all, Pahrump is just a long rock throw across a mountain range from Las Vegas (45 miles).

Let me give you a little back story here:  The bawdy game has been in Nevada since the Comstock Lode.  Prostitution is legal in most Nevada counties including Nye County where the Chicken Ranch resides.  Prostitution in Clark County/Las Vegas, Washoe County/Reno, and Carson County/Carson City is illegal.  It is not uncommon for the legal “sex trade” to rub elbows with common folks and the movers and shakers of the area. As the League of Women Voters in one county said, “It’s just folks out making a living and they add necessary dollars to the tax base.” It is interesting to note that every time a vote has come up in the individual counties to eliminate prostitution, it has been rejected by the majority of voters in that particular county. At this writing Nevada has 37 active legal houses of prostitution and nearly 400 “full-time working girls.”

Saturday morning was cloudy, slightly breezy and cool. Just perfect weather for a chili cookoff and the chili teams quickly set up their booths and arranged their cooking gear.   The cooks fired their stoves at 10:00 AM. It didn’t take long for the heady aroma of red chili powder, spices and meat all stewing together filled the air; it’s always aromatically overwhelming to an old cowboy like me. 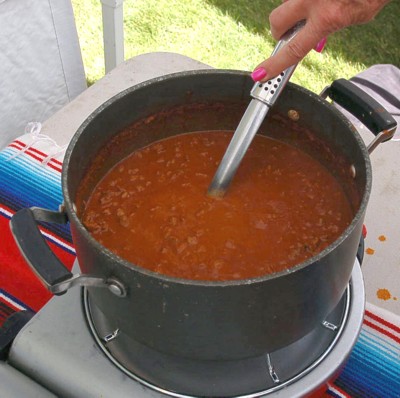 Those in the salsa contest turned in their entries at 11:30 and the chili contestants turned in their judging bowls at 2:00.  People’s Choice chili was handed out around noon when the first of the crowd arrived. The judging took awhile longer than anticipated, there were some tough decisions to make but after a tie-breaker or two the winners were confirmed. Word was passed among the cooks that the awards would be ready around 3:30 or 4:00 after the golfers’ awards and the bathing beauty contest.  In the meantime, the party went on and it was around 2:00 PM when the golfers and the caddies arrived.  At this time the music picked up a beat.

Let me tell you about the caddies accompanying the golfers. As mentioned earlier, the Sin City C of C was the organizer of the whole shebang. For the most part, members of this chamber are from the “other side” of the Las Vegas-area business world. They are comprised of the adult industry such as the porn shops, escort services and, most of all, the very tourist-popular stripper clubs. As for the caddies, you guessed it; they were strippers and their foxy friends. When they arrived, and the available working girls from inside showed, the party kicked up a giant notch.  You could say it got a little spicy.  It reminded me of the old days when the California State Chili Championship was held at the Balboa Bay Club in Newport Beach–this event was a smaller version and, believe it or not, it was not as racy as those in California.  All in all everyone behaved but what a fleshy batch of bare skin to have flitting amongst the chili booths!

Norm Gaul, past ICS world champion, was the Head Judge, and his wife, Bobbie, was in charge of scorekeeping. Norm reviewed the rules with us and introduced the first time chili teams. It was a Peoples Choice cookoff as well as competition for typical red chili and salsa. The salsa winner would advance to the 2008 ICS World Championship, and the red chili winner would qualify for the Last Chance cookoff also held at the World Championship. There were cooks from southern Nevada, California and a far-flung entry from New Jersey. We were ready to get after it.

As mentioned earlier, the judges had some tough decisions to make. But the cream always rises at a cookoff even one with all the distractions we had at the Chicken Ranch. The salsa contest winners were Cindy Haught (3rd) from nearby Pahrump, Sheila Beller (2nd) from Bakersfield (CA), and the winner was Gene Beller from Bakersfield (CA). First time cook winner was Sheri Shelton of Las Vegas.  People’s Choice winner was Marty Leitner from nearby Sandy Valley. Red chili winners were Lenn Deevers from Henderson (4th), Cindy Haught from Pahrump (3rd), Jodi “Coyote Jodi” Wiseman from Las Vegas (2nd), and Ray Bogart from Boulder City (NV) was 1st. As for my chili, it turned out too rich.  Even though Coyote Jodi had me on a long leash I did find time to take a few pictures and interview scantily clad folks.  I was a good boy, though. 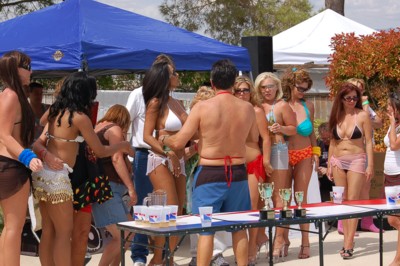