I realized that chipotles had hit the mainstream during lunch at the Quarters in Albuquerque. My friend Wayne and I have been having our two-martini lunch weekly at the Quarters since 1975, and not much has changed over the years. It’s a barbecue joint with great sandwiches, but this Monday in 2001, something new appeared on the menu: Alaskan King Crab Cake Sandwich with Chipotle Mayonnaise. Not only was the sandwich great, it got me thinking about how far chipotles have progressed in American cuisine.

A Bit of Smoky Background

Virtually unheard of a  a couple of decades ago, chipotle chiles have powered their way into the Fiery-Foods and Barbecue Industries. Because of their unique flavor profile–heat plus smoky overtones–the chipotle is a unique ingredient in a growing number of restaurant dishes, food service products, and fiery specialty foods.

“Once upon a time the term chipotle was esoteric,” chile wholesaler Gary Brooks told me in 2001. “But now billion-dollar suppliers that create menu products for the nation’s largest restaurant chains are using chipotle as a staple.”

The first chipotle product was Bufalo Chipotle Hot Sauce, introduced in the early 1950s. It was made in Mexico and soon became the best-selling hot sauce in that country. In the United States, it was popular mostly with Mexican-Americans–until the fiery foods boom that began in 1975. Hot Sauce World claims that the product is “Mexico’s #1 Hot Sauce for 60 years!”

In 1989, Chuck Evans, owner of the Montezuma® brand of sauces, introduced Montezuma Smokey Chipotle® Sauce and that sauce was the first American chipotle sauce. Now there are dozens of chipotle sauces and salsas, and the major players like Tabasco® and Melinda’s have produced chipotle sauces. You know chipotle has mainstreamed when McCormick® sells McCormick® Grill Mates® Chipotle Pepper Marinade.

Restaurants Get Into the Act

When I heard that Starbucks was going after the lunch bunch with a chipotle chicken sandwich, I guessed that restaurants were in the vanguard of chipotle appreciation. I did several web searches and discovered that innovative American chefs were creating chipotle masterpieces. For example, El Torito Restaurants menu developers won the “Best in Class–Dinner Entree” award at the Menu 2000 conference with their Grand Marnier Sirloin Steak Fajita Skillet with Chipotle Adobo Sauce. Some famous chefs got into the action, like Rick Bayless of the Frontera Grill in Chicago and his menu item Chipotle-Glazed Salmon with Spicy Peanut Salsa.

At Casa Rincon in Sedona, Arizona, a favorite dish is Southwest Pork Tenderloin with Chipotle Mashed Potatoes. Another Sedona restaurant, the Silver Saddle Room, offers Deep-Fried Rattlesnake Nuggets Dusted with Cornmeal with Sweet Chipotle Sauce! Trumbull Kitchen in Connecticut serves Mini Crab Cakes with Chipotle Aioli while Deb & Lola’s in Kentucky offers Venison Tenderloin with Chipotle Bordelaise. At R.L. Steamers in Chesterfield, Missouri, one of the specialties of the house is Fried Oyster Nachos with Monterey Jack Cheese and Chipotle. At the Powerhouse Café in San Antonio, customers rave over the Duck-Tart Appetizer with Tomatillo-Chipotle Sauce while in in Sacramento, the Delta King Riverboat serves Wild Rice and Chipotle-Garlic Cream Sauce with its Grilled and Prosciutto-Wrapped Atlantic Sea Scallops.

The most dramatic use of chipotles in the restaurant industry is Chipotle Mexican Grill.  Founder Steve Ells opened the first Chipotle Mexican Grill in Denver, Colorado in 1993. As of March, 2009, 830 more of these restaurants have since opened throughout the United States and Canada. All are company-owned, rather than franchised. The company had an astonishing $1.331 billion in sales in 2008.  Featured on the menu are burritos and soft tacos with chipotle-based fillings like chicken thighs marinated in chipotle adobo and grilled; barbacoa (shredded beef) seared and then braised in chipotle adobo with cumin, garlic, and other spices, and steak marinated in a spicy chipotle adobo and then grilled to medium-rare.  For a “fast food” chain, I thought their food was excellent, at least when I ate lunch at one in Houston.

Of course, specialty food manufacturers couldn’t keep their hands off an ingredient as hot as the chipotle, but even I was amazed at the breadth of the product lines. We did a search of Scovie Awards entries over the past few years to find representative products. I’m not going to discuss the basic chipotle sauces, salsas, or barbecue sauces–they are very common–but will focus on the more unique products.

It is quite obvious that there is no lack of creativity in the Fiery Foods Industry!  Chipotle technology is much more sophisticated now than the old tunnels in the ground, and with companies like Chipotle Texas ensuring unlimited and clean supplies of smoked chiles, I have no doubt that the demand will increase greatly as America’s love affair with the chipotle continues. 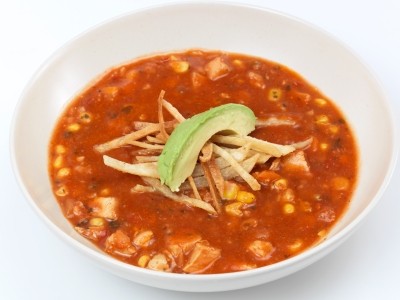 Here is a classic soup from central Mexico. The name comes from Tlalpan, which is a suburb of Mexico City. It takes a bit of time to cook, but it’s well worth the effort. Substitute any chipotle hot sauce for the canned chipotles, if desired.

Add the chicken and cilantro and simmer, uncovered, over medium-low heat for 1 hour. Add salt and pepper to taste.

Serve with tortilla strips and avocado slices in soup bowls.