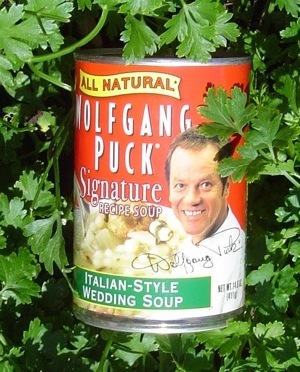 I went to one of my favorite Albuquerque restaurants, St. Clair Winery & Bistro, for lunch and because of what happened, and how I was treated, I will never return.  Before I explain the details, let me say that I am a huge supporter of local restaurants.  For example, I have eaten lunch at The Quarters on Yale about once a week for 35 years.  More about that later.

Today, at the other restaurant, I ordered the soup of the day and a salad.  The salad was wonderful but I had a problem with the soup.  It wasn’t the server’s fault, so I asked to speak to the manager.  He came over to the table and I introduced myself as the producer of the National Fiery Foods and Barbecue Show and the author of more than thirty cookbooks.  He knew who I was.

“I like your restaurant and eat here often,” I told him,  “and I also visit your other restaurant in the southern part of the state.  But when I go to a restaurant, I don’t expect to be served soup out of a can.”

“This soup is Wolfgang Puck’s Italian Wedding Soup.  I know because I’ve eaten it more than a dozen times, and we can buy it for a dollar a can at Big Lots.”

He blushed beet red.  “Uh, sometimes we don’t make everything from scratch,” he stammered.  “But we do add stuff to it like wine.”

“Food service products are one thing because the consumer can’t buy them,” I explained.  “But a famous chef’s soup from a can, heated up for four times the price, is not acceptable.”

“Sorry about that,” he said, backing away.  When I got the check, the soup was still on it.  I paid the bill, thanked and tipped the server and left, never to go back.

What should the manager have done?  At the very least, taken the offending soup off the bill.  At the most, comped the meal, given me a certificate for another lunch, and agreed to take canned soup off their menu.  But he didn’t do any of these—obviously an incompetent manager.

Now why have I eaten at The Quarters more than 1,700 times?  Because Connie Nellos knows how to run a restaurant.  The food is good, with substantial portions.  They pour a generous drink.  The servers are well-trained and very nice people.  My wife was a bartender there in the ’70s, working her way through graduate school and she made good money.  And Connie takes care of his customers.

One time at lunch at the Quarters, my wife reached for her coat and a splinter from the rough, wooden wall got embedded painfully under her fingernail.  Connie came over, apologized, and said he would take care of all the medical expenses, which was essentially a trip to the emergency room at Presbyterian.  He was a man of his word and paid the bill I gave him later.

That’s just one example of what keeps customers coming back.  Food made from scratch is another.

So, how hard is it to make Italian Wedding Soup from scratch?  You decide, from the following recipe, which, of course, I have spiced up.

This Italian-American dish is popular in Ohio and Pennsylvania.  The term “wedding soup” is a mistranslation of the Italian language, minestra maritata (“married soup”), which is a reference to the fact that green vegetables and meats go well together.

In large saucepan, heat the broth to boiling; stir in parsley, orzo pasta, chopped carrot, and the meatballs. Return to boil, then reduce heat to medium. Cook at slow boil for 10 minutes, or until pasta is al dente. Stir frequently to prevent sticking.  Add the hot sauce, stir, and serve.