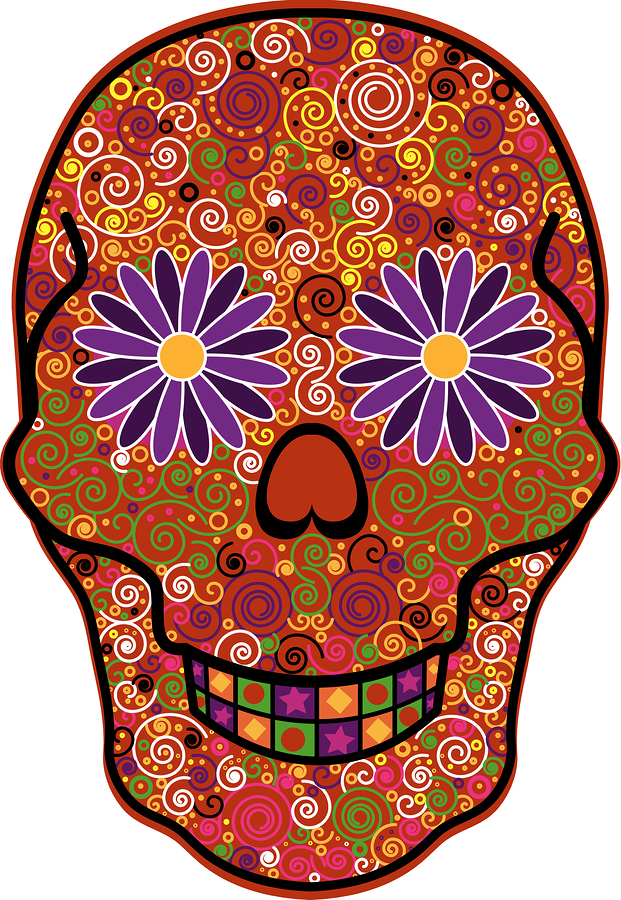 This uniquely Mexican and Central American holiday features celebrations of family and friends to honor relatives and close friends who have died.  The holiday occurs on November 1st and 2nd and is closely connected to the Catholic celebration All Saints’ Day (November 1) and All Souls’ Day (November 2).  The Day(s) of the Dead traditions include visiting grave sites and building private altars to honor the deceased that include sugar skulls, marigolds, and the favorite foods and beverages of the departed.  The altars additionally include photos and memorabilia of the deceased.  The celebrations are not morose, but rather humorous as celebrants remember funny events and anecdotes about the departed.

Although Americans view the dancing skeletons and the celebration of death as macabre or related to Halloween, they are not.  El Día de Los Muertos is not frightening but rather reflective, and certainly not sad. The cavorting skeletons originated from imagery created by the Mexican press artist José Guadalupe Posada, who died in 1913.  Posada inspired muralist Diego Rivera and others with caricatures of wealthy people and politicians who were depicted as skeletons. 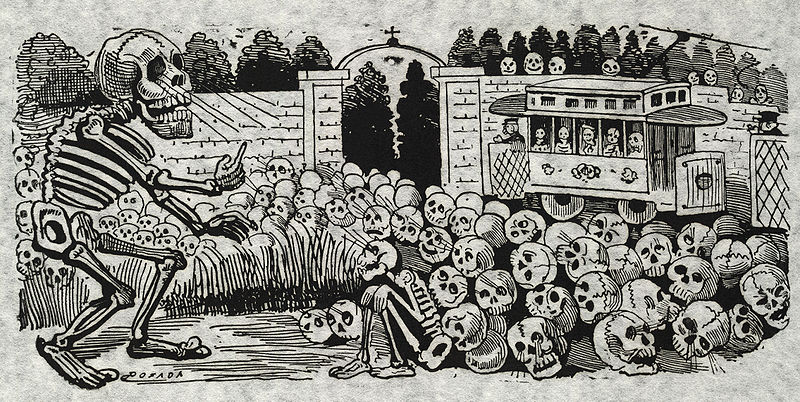 Also on the altars are traditional liquors such as mescal, pulque, and atole, a corn drink.  A glass of water is also essential because after the journey from the heavens to earth, the souls of the departed are thirsty and tired.  They are also hungry, so the foods both offered and consumed by the celebrants are the favorite dishes of the departed, such as moles and tamales, foods that are cooked for special occasions because a lot of work is required to make them, showing devotion and respect for the dead ones.  For more information on the Day of the Dead, go here.

Day of the Dead Recipes 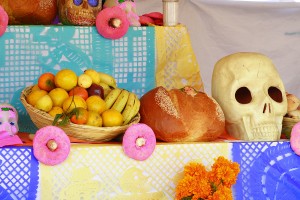 In Mexico, bakeries advertise different shapes of the bread for the holiday.  The most common is round; others might be shapes of human beings, animals, especially rabbits in profile. Some bakeries hire extra bakers to produce loaves to meet the huge demand for this bread,

In a pan, bring the milk to a boil, then remove it from the heat. Stir in the butter, sugar, and salt.
In large bowl, mix the yeast with the warm water until dissolved and let stand 5 minutes.  Add the milk mixture to the yeast mixture.

Flour a pastry board or work surface heavily and place the dough in the center.  Knead until it’s smooth and then move it to a large bowl and cover it with a dish towel. Let the dough rise in a warm place for 1 and 1/2 hours. Meanwhile, grease a baking sheet and preheat the oven to 350 degrees F.

Knead the dough again on a floured surface, then divide the dough into fourths and set one fourth aside. Roll the remaining 3 pieces into “ropes.”

On the greased baking sheet, pinch 3 rope ends together and braid. Finish by pinching the ends together on the opposite side. Divide the remaining dough in half and form 2 “bones.” Cross and lay the bones on top of the braided loaf.

Cover bread with a dish towel and let rise for another 30 minutes. Meanwhile, in a bowl, mix together the anise seed, cinnamon and 2 teaspoons sugar together. In another bowl, beat the egg white lightly.

When the 30 minutes are up, brush the top of the bread with egg white and sprinkle with sugar mixture, except on the cross bones. Bake at 350 degrees for 35 minutes. 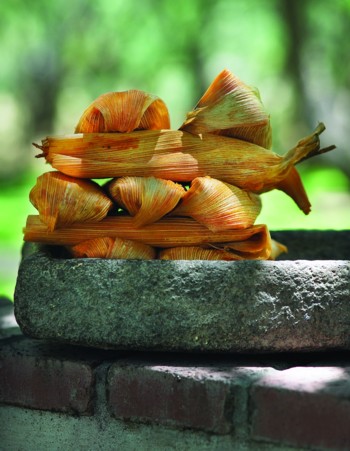 This Mexican recipe has a Southwestern spin. Tamales can be found in restaurants, cafes, and during Day of the Dead celebrations in New Mexico and Arizona. Everybody loves them, so make a bunch and freeze any leftovers. This recipe makes enough pork filling to make another batch of tamales, but you can always just use the extra pork for burritos.

Arrange the pork butt in a large Dutch oven or heavy-bottomed stockpot. Add the garlic, peppercorns, bay leaves and salt. Pour over it enough cold water to cover by several inches. Turn the heat to high and bring the liquid to a boil, then reduce the heat and simmer, partially covered, about 2 hours.

Transfer the pork to a cutting board and allow it to rest 20 minutes. Using 2 forks, shred the meat. In a bowl, combine 2 cups of the shredded pork with enough red chile sauce to thoroughly moisten the meat.

If you’re using masa harina, pour it into a bowl and add 2 cups warm water. Work the mixture into a dough with your hands and then set it aside to rest for about 15 minutes.

Add the lard to the workbowl of a standing mixer fixed with the whisk attachment (or use a regular hand mixer in a large bowl) and beat it together with the salt and baking powder until light and fluffy.

If you’re using a standing mixer, switch to the paddle attachment. While beating, add the reconstituted (or freshly ground) masa by handfuls into the workbowl. Add the stock and beat until combined. Taste the mixture and add salt if necessary.

Continue beating until the masa is light and fluffy, 15 or 20 minutes. The masa is ready when a grape-sized ball of dough floats in a glass of cold water. If the dough sinks continue beating 5 minutes longer, then test it again.

Yield: Enough for about 24 medium tamales

This is my version of New Mexico’s famous red chile sauce. Mixed with shredded pork, it is used as a tamale filling, but it is also ladled over the tamales as well as enchiladas, huevos rancheros, breakfast burritos, stuffed sopaipillas, chiles rellenos and almost anything else you can think of. You may not need four cups of the sauce for your recipe, but you might as well make the whole batch; freeze extra portions in small resealable plastic containers.

In a large cast-iron skillet over medium heat, toast the chiles on both sides (you’ll have to do this in batches) until they soften slightly and become aromatic. When the chiles are cool enough to handle, remove the stems and seeds.

Transfer the chiles to a deep saucepan and pour over them about 4 cups water (or enough to just barely cover. Bring the mixture to a boil, then reduce the heat and simmer for about 10 minutes. Remove the pan from the heat and allow the chiles to rest, about 15 minutes.

Working in batches, puree the chiles with their soaking liquid.

In the cast-iron skillet, over medium heat, melt the bacon grease. Add the garlic and flour and cook, stirring, until the mixture becomes golden. Add the pureed chiles and stir quickly while the sauce bubbles and spatters. Reduce the heat, add the oregano and simmer 5 minutes. Season to taste with salt. If the sauce is a little bitter, mellow it with the honey. 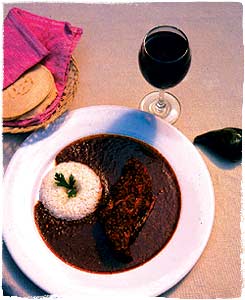 This brick-red mole, courtesy of Restaurante El Naranjo in Oaxaca City, is made with chile ancho, sesame seeds, and almonds.

Clean the chiles with a damp cloth, then discard the seeds and stems. Roast the chiles slightly on a hot skillet. Transfer to a pot with hot water, and let them soak for 20 minutes.

On a separate skillet, dry-roast the tomatoes and the unpeeled garlic cloves.

Meanwhile, heat the oil in a big pot, blend the chiles with enough fresh water, and add to the pot. Let it fry for about 8 to10 minutes. Blend the reserved nuts and spices along with the tomatoes, garlic, and enough water. Add to the cooking pot.

Blend the cinnamon with a little water and pass through a sieve over the mole. Simmer until thickened, about 20 minutes.

Add the chicken stock and bring to a boil. Let cook for 15 minutes, then add salt and sugar to taste. The mole should cover the back of a spoon.

Add boiled chicken (see below), let simmer for 10 minutes, and serve with rice and tortillas.

To cook the chicken: Bring 2 quarts water to a boil, add ½ onion, 3 cloves garlic and salt. When boiling, add the chicken pieces and let it boil until the meat is done.