Beargrass Creek, which is one of the many beautiful streams of the highly cultivated and happy State of Kentucky, meanders through a deeply shaded growth of majestic beechwoods, in which are interspersed various species of walnut, oak, elm, ash, and other trees, extending on either side of its course. The spot on which I witnessed the celebration of an anniversary of the glorious proclamation of our independence is situated on its banks near the city of Louisville. The woods spread their dense tufts towards the shore of the fair Ohio on the west, and over the gently rising grounds to the south and east. Every open spot forming a plantation was smiling in the luxuriance of a summer harvest . The farmer seemed to stand in admiration of the spectacle; the trees of his orchards bowed their branches, as if anxious to restore to their mother earth the fruit with which they were laden; the flocks leisurely ruminated as they lay on their grassy plain. And now the roasting viands perfume the air, and all appearances conspire to predict the speedy commencement of a banquet such as may suit the vigorous appetite of American woodsmen. Every steward is at his post ready to receive the joyous groups that at this moment begin to emerge from the dark recesses of the woods.

Each comely fair one, clad in pure white, is seen advancing under the protection of her sturdy lover, the neighing of their prancing steeds proclaiming how proud they are of their burden. The youthful riders leap from their seats, and the horses are speedily secured by twisting their bridles round a branch. As the youth of Kentucky lightly and gayly advanced towards the barbecue, they resembled a procession of nymphs and disguised divinities. Fathers and mothers smiled upon them as they followed the brilliant cortege. In a short time the ground was alive with merriment. A great wooden cannon bound with iron hoops was now crammed with home-made powder; fire was conveyed to it by means of a train, and as the explosion burst forth, thousands of hearty huzzas mingled with its echoes. From the most learned a good oration fell in proud and gladdening words on every ear, and although it probably did not equal the eloquence of a Clay, an Everett, a Webster, or a Preston, it served to remind every Kentuckian present of the glorious name, the patriotism, the courage, and the virtue of our immortal Washington. Fifes and drums sounded the march which had ever led him to glory; and as they changed to our celebrated “Yankee-Doodle,” the air again rang with acclamations. 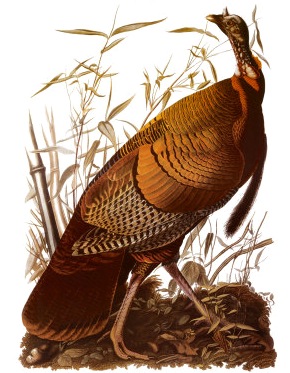 Now the stewards invited the assembled throngs to the feast. The fair led the van, and were first placed around the tables, which groaned under the profusion of the best productions of the country that had been heaped upon them. On each lovely nymph attended her gay beau, who in her chance or sidelong glances ever watched an opportunity of reading his happiness. How the viands diminished under the action of so many agents of destruction, I need not say, nor is it necessary that you should listen to the long recital. Many a national toast was offered and accepted, any speeches were delivered, and many essayed in amicable reply. The ladies then retired to booths that had been erected at a little distance, to which they were conducted by their partners, who returned to the table, and having thus cleared for action, recommenced a series of hearty rounds. However, as Kentuckians are neither slow nor long at their meals, all were in a few minutes replenished, and after a few more draughts from the bowl, they rejoined the ladies and prepared for the dance.

Double lines of a hundred fair ones extended along the ground in the most shady part of the woods, while here and there smaller groups awaited the merry trills of reels and cotillons. A burst of music from violins, clarionets, and bugles gave the welcome notice, and presently the whole assemblage seemed to be gracefully moving through the air. The “hunting-shirts” now joined in the dance, their fringed skirts keeping time with the gowns of the ladies, and the married people of either sex stepped in and mixed with their children. Every countenance beamed with joy, every heart leaped with gladness; no pride, no pomp, no affectation were there; their spirits brightened as they continued their exhilarating exercise, and care and sorrow were flung to the winds. During each interval of rest refreshments of all sorts were handed round, and while the fair one cooled her lips with the grateful juice of the melon, the hunter of Kentucky quenched his thirst with ample draughts of well-tempered punch.

I know, reader, that had you been with me on that day you would have richly enjoyed the sight of this national fete champe’tre. You would have listened with pleasure to the ingenuous tale of the lover, the wise talk of the elder on the affairs of the State, the accounts of improvement in stock and utensils, and the hopes of continued prosperity to the country at large, and to Kentucky in particular. You would have been pleased to see those who did not join in the dance shooting at distant marks with their heavy rifles, or watched how they showed off the superior speed of their high bred “Old Virginia” horses, while others recounted their hunting exploits, and at intervals made the woods ring with their bursts of laughter. With me the time sped like an arrow in its flight, and although more than twenty years have elapsed since I joined a Kentucky barbecue, my spirit is refreshed every Fourth of July by the recollection of that day’s merriment.

But now the sun has declined, and the shades of evening creep over the scene. Large fires are lighted in the woods, casting the long shadows of the live columns far along the trodden ground, and flaring on the happy groups loath to separate. In the still, clear sky, begin to sparkle the distant lamps of heaven. One might have thought that Nature herself smiled on the joy of her children. Supper now appeared on the tables, and after all had again refreshed themselves, preparations were made for departure. The lover hurried for the steed of his fair one, the hunter seized the arm of his friend, families gathered into loving groups, and all returned in peace to their happy homes.

And now, reader, allow me also to take my leave, and wish you good-night, trusting that when I again appear with another volume, you will be ready to welcome me with a cordial greeting.