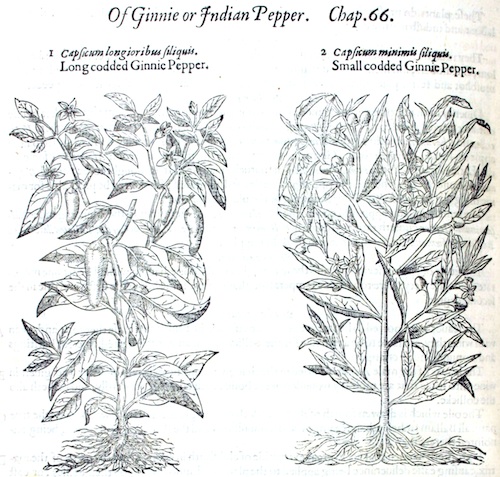 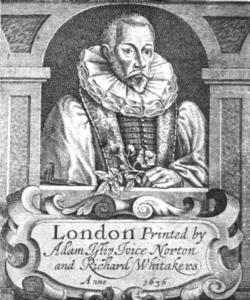 Editor’s Notes: This description is taken from The Herball or Generall Historie of Plantes, by John Gerard (Publisher: John Norton, London, 1597). Gerard is the best known of all English herbalists mostly because of this herbal. His official career was a barber/surgeon but his first love was horticulture. For twenty years he had a famous garden in a fashionable London district. In 1596, he published a list of plants that he cultivated, which is believed to be the first complete description ever published of all the plants in a single garden. Gerard’s herbal is not an original work but rather was based on the works of Dodoens and de L’Obel. It contains 1,800 woodcuts of which most are from the woodblocks used by Tabernaemontanus in 1590. One represents the potato, which is believed to be the first illustration of this plant ever published. Here’s what’s interesting to me: At least he named the genus Capsicum correctly, although the species are not not accurate.  Despite the plant importations from the New World that occurred in the previous 100 years, even herbalists thought that chiles originated in India.  Notice how Gerard was a container gardener too, which considerably predated the same hobby of Victorian times.  I’ve tried chiles on my facial blemishes and they didn’t work.  Because Gerard wrote in now-archaic English, I have transliterated the text to make it more readable, and added bracketed notes.

The first of these plants has square stalks a foot high or somewhat more, set with many thick and fat leaves, not unlike those of a garden Nightshade, but narrower and sharper pointed, of a dark green color. The flowers grow along the stalks out of the wings of the leaves of a white color, having for the most part five small leaves [petals] blazing out like a star, with a green button in the middle. After them grow the cods [pods], green at first, and when they are ripe, a brave color glittering like red coral, in which is contained little flat seeds of a light yellow color, of a hot biting taste like common pepper, as is also the cod itself, which is long and as big as a finger and sharp-pointed.

The second kind of Ginnie [Guinea, West Africa] pepper is like the preceding one in leaves, flowers, and stalks. The cods here are small, round, and red, very like the berries of Dulcamara or wood Nightshade, both in bigness, color, and substance, wherein consists the difference: not withstanding, the seeds and cods are very sharp and biting, as are those of the first kind.

The plants are brought from foreign countries, as Ginnie, India, and those parts, into Spain, and Italy, from where we have received seed for our English gardens. When they come to fruit-bearing, the cod does not come to that bright red color which it naturally has because of these unkindly years that have just passed; but we expect better when God shall send us a hot and temperate year.

The seeds must be sown in a bed of hot horse dung, as musk melons are, and moved into a pot when [the plant] has gotten three or four leaves, that it may be carried from place to place more conveniently to receive the the heat of the sun; and in autumn carried into some house to avoid the injury of cold nights at that time of year when it is to bear fruit.

The later herbalists often call it Piper Indianum or Indicum or sometimes Piper Calicuthium or Piper Hispanicum; in English it is called Ginnie Pepper and Indian Pepper; in German Indianicher Pfeffer; in low French Poivre d’ Inde,very well known in the shops at Billingsgate by Ginnie Pepper, where it is usually bought.

Ginnie pepper is extremely hot and dry even in the fourth degree; that is to say, far hotter and drier than Aucien said dog’s ginger was.

Ginnie pepper has the taste of pepper, but not the power or virtue, notwithstanding that in Spain and various parts of the Indies they do use it to dress their meats, as we do with Calcutta pepper; but (says my author [Auicen, an Arabian physician]) it has a malicious quality, whereby it is an enemy to the liver and other entrails. Auicen writes that it kills dogs.

It is said to die or color like Saffron; and being consumed in the same sort as Saffron is usually taken, it warms the stomach, and helps greatly the digestion of meats.

It dissolves the swellings around the throat called King’s Evil, and takes away spots and blemishes from the face when applied with honey.

The Grains of Paradise

The Grains of Paradise