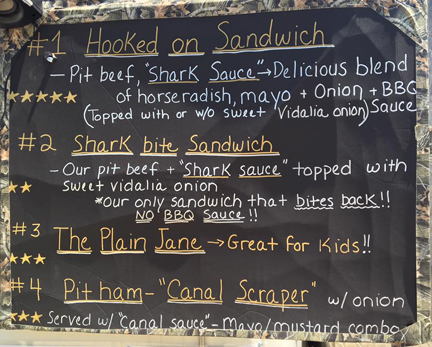 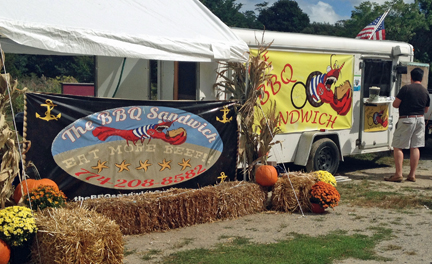 Pit beef – a somewhat tough cut of beef roast turned into delectable sandwiches – is not “true” barbecue… there’s no smoke added to the beef. The meat is grilled using both direct and indirect cooking making exquisitely tender beef – crispy edges with a rare interior – a classic sandwich from the east side of Baltimore.

Combined with a horseradish-mayonnaise aioli-style sauce, called Tiger Sauce in Baltimore and parts of Maryland (this “Tiger Sauce” is not the same as the bottled sauce of the same name), and thinly sliced raw onion, the combination creates a great sandwich.

(Pit beef doesn’t have Colonial-era barbecue history as it first appeared in the late 1960s at a tavern in Baltimore. The original pit beef was hand-sliced and served with grated fresh horseradish, not horseradish sauce.)

The recipe is a three-step process: make the horseradish sauce; prepare the BBQ sauce (if using) and cook the beef. 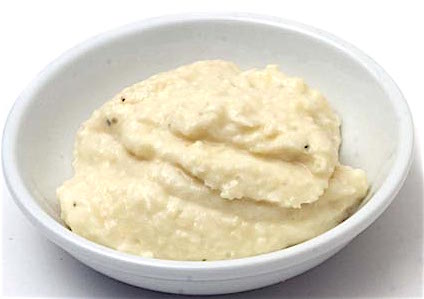 Whisk all the ingredients together in a small bowl. Season with salt and pepper. Cover and refrigerate for at least one hour. 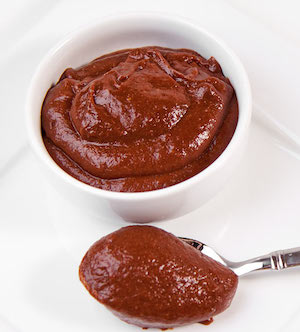 Traditionally, Pit Beef sandwiches are served with only Tiger Sauce and sliced raw onion. I like to add a thin BBQ-style sauce but the choice is up to you.
This sauce should be prepared at least one day in advance to allow the flavors to blend. It will keep, covered and refrigerated, for up to two weeks. Serve the sauce warm or at room temperature.a sauce – sweet, vinegary with a little pepper kick – I developed for pit beef:

Although not necessary, the sauce could be puréed using a small food processor or immersion blender. I like serving mine with the small onion pieces in the sauce.

This sauce would also work well for pork or chicken.

Yield: About one cup
Heat Scale: Mild to medium

Adrian Vickers, the owner of The BBQ Sandwich (suitably located in Sandwich, MA) and a former Baltimore resident, has an “All Shark Sauce” he serves with his pit beef sandwich if requested. He operates a roadside food truck (actually a repurposed 16-foot construction trailer) four days a week from spring “until the temperature drops below 30 degrees.” Although he declined to provide the “All Shark Sauce” recipe, he described the sauce as “a 55-gallon drum of dignity. A swimming pool full of pride! And two arms full of family love and tradition.” He did say his BBQ sauce is a commercial preparation. 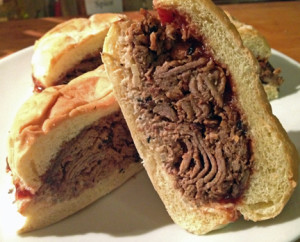 Trim the roast of any silverskin and extraneous fat. (Eye round roast could also be used for this recipe.)

Generously sprinkle all surfaces of the roast with the rub and wrap in food film. Refrigerate for at least four hours or up to two days. Remove the roast from the refrigerator and pat dry. Season the roast with another layer of rub.

As traditional pit beef is not smoked, I opted to use my venerable 15-year-old Broilmaster P-3 propane grill instead of my Yoder YS-640 pellet cooker. While I could have used the Weber Smokey Mountain or Grill Dome Infinity XL, I didn’t want to deal with lighting hardwood charcoal so gas was the way to go! 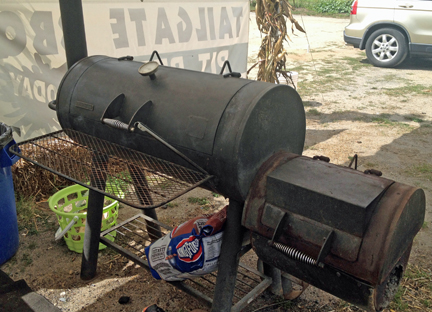 Move the meat to the indirect-heat side of the grill. Close the lid. (Traditionally pit beef was cooked over an open pit but most roadside stands and restaurants now use grills instead of open pits.)

Cook the beef for 30 minutes to 45 minutes (for medium-rare) on the indirect heat side of the grill. Use an instant-read thermometer to check the temperature, you don’t want to overcook the beef… it should be served rare to medium-rare. Transfer to a cutting board; rest the meat under foil for five minutes and slice it against the grain as thinly as possible. (An electric slicer is ideal for this but it can be done with a very sharp chef’s knife.)

Slice each roll in half crosswise. Slather the cut sides with Tiger Sauce. Add a layer of thinly sliced onion and pile on about six ounces of the sliced beef. Top with BBQ sauce, if using, and serve.

Combine all the ingredients in a small mixing bowl. This rub, covered, will keep for up to a month before losing its flavor.

(Mike serves as our BBQ, Grilling and Gadgets editor. He has a yard full of cooking hardware – a couple of WSM smokers, two propane-fired grills, a Grill Dome Infinity XL ceramic cooker, a Yoder YS-640 pellet cooker and a bevy of miscellaneous cooking hardware. His garage has no room for a car… it’s filled with more cooking gear, various accessories, cases of wood chips and bags of pellets. His third cookbook is Mastering Barbecue, published by Random House.)