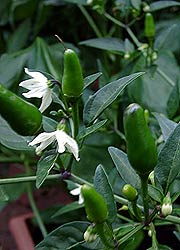 Since many wild chiles have the word “bird” in their names, distinguishing among them can be difficult. Most bird peppers are undomesticated varieties of four species: annuum, baccatum, chinense, and frutescens. The most familiar bird peppers are the Mexican chiltepin and the Texan chilipiquin. The African birdseye chile is both wild and domesticated and is also known in English as African devil chile, in Swahili as pili-pili and in Kamba as ndul. Some sources state that this chile is also prik kee nu, the Thai “mouse dropping pepper,” but that is a different, much thinner chile. It should be pointed out that pili-pili simply means “pepper-pepper” and is a generic term for any African chile.

Most sources state that the birdseye is Capsicum frutescens, making it a relative of the tabasco chile. Depending on growing conditions, the plants range in height from one and a half to four feet tall, and are usually very bushy. The leaves vary in length from 1 ½ to 3 inches and in width from ½ inch to 1 inch. The fruits generally measure between ½ and 1 inch long and taper to a blunt point. Immature pod color is green, mature color is bright red.

Pungency can vary according to precise variety of birdseye, where it is grown, and environmental conditions. The birdseye, particularly the Ugandan variety, is thought to be the most pungent chile that is not of the chinense species, measuring up to 175,000 Scoville Heat Units.

In a test of a variety provided by chile gardener Harald Zoschke, the ‘Malawi Birdseye’ variety from Africa was measured at 112,226 SHU, and the same variety grown in Harald’s garden was measured at 99,579 SHU.

It has grown wild in Africa for centuries but has been under commercial cultivation in for many years in Uganda, Malawi, and Zimbabwe. Other countries where it is cultivated include Papua New Guinea, China, Mexico, Chile, and India. The plants are perennial and sometimes produce for three years before they are plowed under. Growing African birdseye chiles is very labor-intensive and they require hand-picking. The pods are picked when they are bright red and 2 or less centimeters (3/4 inch) long. A single plant yields about 300 grams (2/3 pound) of fresh pods. Yields of about 1.8 metric tons per hectare are typical (a hectare is 2.47 acres). 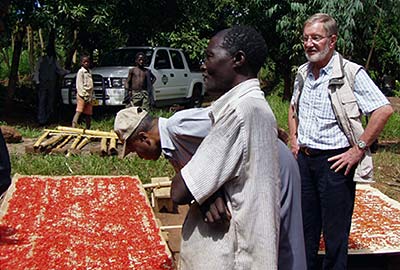 Seed sources are difficult to find in the United States. It is best to do a Web search for suppliers of whole pods (search: birdseye pepper) and take the seeds from them. Since the pods are not furnace-dried, the seeds are usually viable.

Because of the extremely high heat levels, most African birdseye chiles are processed into oleoresin capsicum (pepper extract) for use in commercial food processing and the pharmaceutical industry. The ground powder is often sold as extremely hot cayenne powder and is packaged in capsules. Prices paid for birdseye pods in July, 2001 were: Zimbabwe, US$ 2,750 per metric ton and Malawi, US$ 2,800 per metric ton.

I think that saying “African birdseye chile” is like saying “chile verde” or “green chile.” Any piquin-shaped fruit is “African birdseye chile.” A couple of years ago, I got thirty accessions from Ghana. They were marked C. annuum and C. frutescens. It turned out that some annuums were C. chinense. And, all the accessions labeled C. frutescens were C. annuum, except for one accession that was a mix of C. frutescens and C. annuum. Maybe this goes back to the days when C. annuum equalled C. frutescens? From my experience, Ethiopia, Zimbabwe, and Senegal all have C. annuum. There is little good African information. An interesting observation is that in Nepal, the wild chiles are C. frutescens, while those around houses and in plots are C. annuum or C. chinense.

Take care in using African birdseye chiles in the kitchen because of the extreme pungency of the pods. You would not, for example, want to make a hot sauce out of a cup of the pods and some vinegar. However, they can be used in marinades, as the following recipe shows.