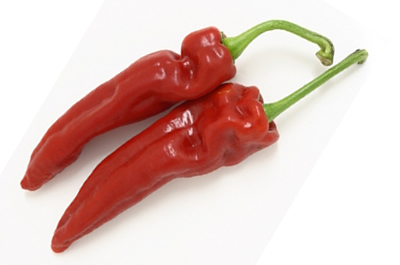 The word paprika derives from the Hungarian paparka, which is a variation on the Bulgarian piperka, which in turn was derived from the Latin piper, for “pepper.” In the United States, the term paprika simply means any nonpungent red chile, mostly New Mexican pod types that have had their pungency genetically removed. In Europe, however, paprika has much greater depth, having not only distinct pod types but also specific grades of the powders made from these pod types.

There is a minor debate over the arrival of the imported Capsicums from the Western Hemisphere into Hungary and surrounding areas. Some historians credit their spread to the invasion of the Ottoman Turks into Central Europe. The armies of Sulieman the Magnificent conquered Syria and Egypt in 1516-17, Yugoslavia in 1521, and Hungary in 1526. The year 1526 is the date usually given for the introduction of paprika into Hungary by the Turks, but this date is only plausible if the Turks had somehow acquired chiles from either Spanish, Italian, or Greek traders in the Mediterranean.

Zoltan Halasz, author of Hungarian Paprika Through the Ages, believes: “Most probably the Turks got into the possession of Paprika through Italian intermediaries, and since a great many nations fond of gardening lived on the Balkan Peninsula, which was under Turkish occupation, the cultivation of the spice, winning favor among all these peoples, soon became widespread.”

A more likely scenario holds that the Turks first became aware of chile peppers when they beseiged the Portuguese colony of Diu, near Calicut, in 1538. This theory suggests that the Turks learned of chile peppers during that battle and then transported them along the trade routes of their vast empire, which stretched from India to Central Europe. According to Leonhard Fuchs, an early German professor of medicine, chiles were cultivated in Germany by 1542, in England by 1548, and in the Balkans by 1569. Fuchs knew that the European chiles had been imported from India, so he called them “Calicut peppers.” However, he wrongly assumed that chiles were native to India.

So, sometime between 1538 and 1548, chiles were introduced into Hungary, and the first citizens to accept the fiery pods were the servants and shepherds who had more contact with the Turkish invaders. Zoltan Halasz tells the tale: “Hungarian herdsmen started to sprinkle tasty slices of bacon with Paprika and season the savoury stews they cooked in cauldrons over an open fire with the red spice. They were followed by the fishermen of the Danube…who would render their fish-dishes more palatable with the red spice, and at last the Hungarian peasantry, consuming with great gusto the meat of fattened oxen and pigs or tender poultry which were prepared in Paprika-gravy, professed their irrevocable addiction to Paprika, which by then had become a characteristically Hungarian condiment.”

From that point on, the landed gentry, the aristocracy, and the royal courts readily adopted the hot spice, and the Danube region developed Europe’s only genuine chile cuisine. In the sunny south of Hungary, the brilliant red pods decorated gardens everywhere, and even today, that part of the country is the heart of Paprika country. In 1569, an aristocrat named Margit Szechy listed the foreign seeds she was planting in her garden in Hungary. On the list was “Turkisch rot Pfeffer” (Turkish red pepper) seeds, the first recorded instance of chiles in Hungary. Upon Mrs. Szechy’s death and the subsequent division of her estate, her Paprika plots were so valuable they were fought over bitterly by her daughters.

The great pepper-growing areas around Kalocsa and Szeged have just the right combination of soil characteristics, temperature, rainfall, and sunshine required to cultivate these plants successfully. In March, the pepper seeds are put in water to germinate, then transferred to greenhouse beds. Seven weeks later, in May, the small pepper shrubs are re-planted in the open fields. Harvesting starts at the end of the first week in September and lasts for about a month, depending on weather conditions. By harvest time, the mature plants will have grown to a height of sixteen to twenty-four inches. And the pepper pods–three to five inches long and about one to one and a half inches wide–will have ripened from green or yellow to bright red.

In Kalocsa, the annual harvest is celebrated with a paprika festival in September. Known as the Kalocsa Paprika Days, it features an exhibition of food products and agricultural machinery, a professional conference on the topic of paprika, various sports events, a “Paprika Cup” international chess tournament, and a fish soup cooking contest. But the highlight of all this is the Paprika Harvest Parade, complete with local bands and colorful folk-dancing groups, followed that same night by a Paprika Harvest Ball.

So how do those tons of newly-picked peppers get turned into the condiment known as paprika, in all of its many forms? Before the Industrial Revolution, farmers used to string all their ripe peppers by hand and hang them up in a protected place to dry. After a certain period of time, the drying process was completed in large earthenware ovens. The peppers were then crushed underfoot, and finally pounded into a powder by means of a kulu, a huge mortar with a large pestle driven by human power. Water mills later replaced the kulu for grinding paprika, and by the late 1800s steam engines were being used for this task.

But until the mid-1800s it was difficult to control the pungency of the paprika produced. The capsaicin which gives paprika its spicy flavor is found in the pod’s veins and seeds, which were removed by hand before the crushed dried peppers were ground into a powder. This was a time-consuming and inexact process, which yielded paprikas in taste from rather mild to fairly hot. The results were unpredictable.

In 1859, the Palfy brothers of Szeged invented a machine for removing the veins and seeds, then grinding the dried pods into a quality-controlled powder. The millmaster could now determine exactly how much capsaicin was to be removed and how much should be retained. The Palfys’ technique continued to be used in Hungarian factories for almost a century–until the fairly recent introduction of modern automatic machines that wash, dry, crush, sort, and grind the peppers in a continuous process.

The Palfys’ invention made possible the large-scale commercial production of very mild (“Noble Sweet”) paprika, which had a much bigger export market than the hotter-tasting varieties. As the industry expanded to meet both local and foreign demand for this mild (but still richly flavored) paprika, the growers saw the advantage of cultivating a spice pepper that did not need to have its veins and seeds removed.

Ferenc Horvath of Kalocsa developed the first variety of Hungarian pepper that was “sweet” throughout–meaning that its veins and seeds contained very little capsaicin indeed. This kind of pepper is now favored by growers in the regions of Kalocsa and Szeged. It can be used alone, ground to produce a mild but flavorful paprika powder–or in combination with other, hotter peppers to produce some of the standard varieties of paprika marketed by the Hungarians. But with all this emphasis on the demand-and-supply of mild paprika during the past one hundred years, one is tempted to speculate that Hungarian food before Horvath and the Palfys must have been much hotter than it is today.

In the Hungarian countryside, Paprika peppers are threaded onto strings and are hung from the walls, porches, and eaves of farmhouses, much like the chile ristras in the American Southwest. Today Hungary produces both pungent and sweet Paprikas, but originally all Hungarian Paprika was aromatic and quite hot. It was evidently too hot for some tastes, for by the turn of this century other countries were requesting that Hungary develop a non-pungent variety. By accident, farmers produced a sweet variety in their fields when they planted milder “eating” Paprika with hotter “seasoning” Paprika in proximity, and insects cross- pollinated the two. The resulting hybrid reduced the pungency of the Paprika pods and probably led to the non-pungent varieties now grown in Spain.

Note: The hottest paprikas are not the bright red ones, but rather the palest red and light brown colored ones.

The famous “Hungarian flavor,” which is unique to the cuisine of that country, is created by the combination of lard, Paprika, and spices. Chopped onions are always cooked to translucency in the lard; Paprika and sour cream are added to pan drippings after meats have been browned to make a rich sauce, which is then served over meat and peppers. There are many versions of hot and spicy recipes with the generic terms of gulyas (“goulash”) and paprikas (“paprikash”).

Food authority Craig Claiborne has noted, “The innocuous powder which most merchants pass on to their customers as Paprika has slightly more character than crayon or chalk. Any Paprika worthy of its name has an exquisite taste and varies in strength from decidedly hot to pleasantly mild but with a pronounced flavor.” We recommend that cooks use imported Hungarian Paprika such as Szeged, and if it is too mild, they should heat it up with ground Cayenne.