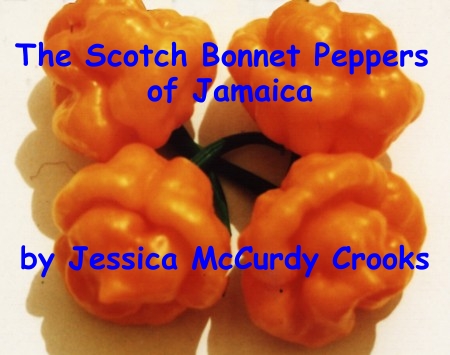 Jamaica is almost as famous for its fiery Scotch bonnet peppers (which are rated as hotter than most habaneros) as it is for Reggae music and sports. Rarely will you find a Jamaican cooking without some of this pepper. Most often used on jerk chicken or pork, peppered shrimp, peppered steak and patties (a meat-filled pie), Scotch bonnet is the pepper of choice among Caribbean nationals. But for most visitors, especially those unfamiliar with this pungent chile, the strength of the Scotch bonnet is a shock.

The Scotch bonnet’s history has been traced to Central and South America; however, there is no concrete proof as to where the chile pepper was first cultivated. Although frequently confused with the habanero, the Scotch bonnet or Jamaican Hot is definitely not the same as its stout cousin. So how do you know a Scotch bonnet pepper? The mature pepper measures between 1 1/2 and 2 inches in diameter. The color of the immature pepper is green, but the mature Scotch bonnet has an attractive range of colors: bright yellow, orange or red. One of the defining features of this type of pepper is its sweet aroma and unique flavor. In fact, the Scotch bonnet was the first Caribbean hot pepper to be known by a specific name in the export market. 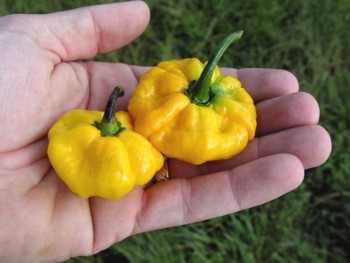 As you can see at left, as early as 1767 the chile was named “Bonnet or Goat Pepper,” the name “goat” resulting from its unique aroma, which was said to resemble “the odour of the he-goat.” The other peppers illustrated are fat pork pepper, bird pepper, cherry pepper, and Negro pepper.

The Scotch bonnet pepper (Capsicum chinense Jacq.) is one of Jamaica’s major agricultural exports. The pepper strives in almost any of the country’s fourteen parishes, because of the tropical climate in which the plant grows best. However, the country’s producers are rarely able to meet the high demand for the product locally or internationally. Jamaican Scotch bonnet pepper is normally sold fresh, but there are also many by-products available such as jerk sauce, mash (both wet and dry) and escoveitch sauce.

Scotch bonnet graded according to quality of the product. Grade A (or Grade 1) is better than Grade B (or Grade 2). A Grade A Scotch bonnet is expected to: 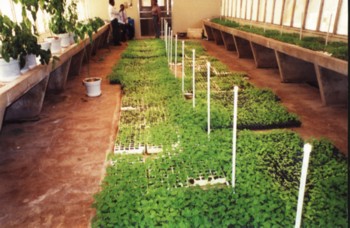 The ideal cultivation site for the Scotch bonnet pepper is well drained sandy/loamy type soil with full sunlight. For best results, seedlings are transplanted in the evening. Be sure to supply the seedlings with enough water; without adequate water, the plants will not strive and the yield will be poor. The best type of irrigation for Scotch bonnets in Jamaica is drip irrigation. Fertilization and strict weed and pest control are important; the plants are especially vulnerable to a number of pests and plant diseases like pepper budworm, mites, crickets, and aphids.

The peppers are harvested about 12 weeks after the seedlings are planted. To determine if a pepper is ready for picking, examine the stalk where it is attached to the pepper. If there is a clear line between the stalk and the pepper it’s ready. For best results the mature fruit should be harvested while the color is still green or yellowing is barely present.

To minimize rotting, Scotch bonnet is picked early in the morning or late afternoon when it is cooler. Farmers also avoid picking the fruit when it is raining in order to reduce the likelihood of spoilage. Although it is best to harvest the fruit under the above conditions, under the right circumstances they can remain intact up to five days after picking.

Jamaicans tend to preserve Scotch bonnet peppers by making a pepper sauce with vinegar, onions and carrots. The fruit can also be preserved, especially for export, by dehydration. When dried, the pepper maintains its strength and aroma but the shelf life is extended. 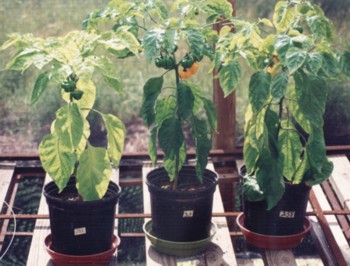 Unfortunately, Jamaica is unable to meet the demand for this highly sought after commodity. Other Caribbean islands have tried to cash in on this demand by exporting the peppers, but importers in the USA who know the product say the quality is inferior to the true Jamaican Scotch bonnet.

The Jamaican government is currently working with agronomists at the Scientific Research Council and the Ministry of Agriculture to save the Scotch pepper which is under threat from the use of inferior seeds, the use of the name Jamaican Scotch bonnet to describe peppers that are not real Scotch bonnet, inferior quality products and inability to meet demand. In addition, the fumigation that is required for entry into the United States results in quicker spoilage.

The Ministry of Agriculture, Rural Agricultural Development Association and the Scientific Research Council are all working to ensure that the Scotch bonnet pepper industry survives. One of the strategies being developed is the sale and distribution of top-quality Jamaican Scotch bonnet seeds to farmers.

In Jamaica, they call pimento allspice. You can find allspice berries in the spice section of your grocery store, but they are often less expensive bought in bulk at a natural foods store. If you can’t find goat meat you can substitute lamb or mutton.

In a large bowl, toss the meat with 2 tablespoons curry and everything except the potatoes and carrots. Cover the bowl with plastic wrap and refrigerate overnight.

Pour the oil into a very large skillet over medium high heat. Add 1 tablespoon curry to the oil and stir. Add the meat, marinade, carrots and potatoes to pan and stir. Pour in 1 1/2 cups water and bring the mixture to a boil. Reduce the heat and simmer, stirring occasionally until the meat is cooked through, about 40 minutes.

Serve with rice or flatbreads.

Also called escabeche, this tart, hot and spicy marinade for fish is an integral part of Jamaican and Puerto Rican foods. In Jamaica it is made with consists of pimientos (allspice), black pepper, onions, garlic, vinegar and Scotch bonnet peppers. Although in Jamaica this dish is made with saltwater fish, use whatever individual-sized fish you can find, like trout.

Rinse the fish with plain water and dry with a paper towel. Sprinkle each fish heavily with salt and pepper, inside and out.

When the oil is hot, add the garlic, let it cook for a few seconds and then remove it.

Fry one fish at a time, turning when the top is golden, until the whole fish is golden brown.

Drain the fish on paper towels and serve with plenty of Escoveitch Sauce.

If you can’t find it bottled, make this sauce just before serving. You can control the heat level by adding more or fewer peppers.

Add the onion, pepper, allspice and vinegar to a saucepan over low heat and simmer for 5 minutes.

Pour contents over fish before serving 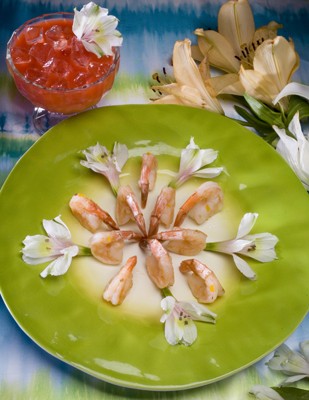 The shrimp taste better if you cook them with their shells on. Then you can serve them as an appetizer and have your guests peel the shrimp themselves. Alternatively, you can use peeled shrimp and serve them over white rice.

Add the oil to a large skillet over medium heat. When the oil is hot add the garlic, peppers and salt and stir for a few seconds. Add the shrimp and cook, stirring occasionally, until they’re almost cooked through.

Pour in the vinegar continue cooking until the shrimp are opaque.

Nothing tastes better on a hot day!

In a tall pitcher, combine the rum, orange juice, pineapple juice and lemon or lime juice. Add the sugar and stir until it is dissolved. Add enough red food color to make the drink bright red.

Pour over ice and serve.