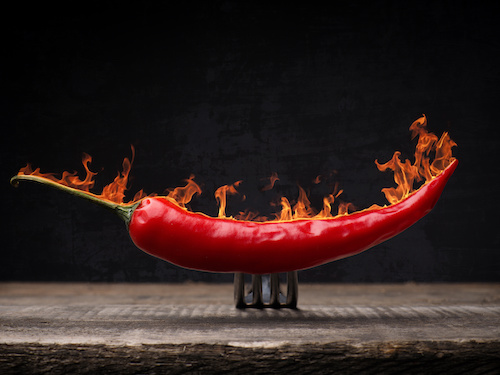 The ritual uses of the genus Capsicum range from the innocuous to the murderous, but the fiery pods are always powerful. In astrology, Capsicums fall under the dominion of Mars, ancient god of war, so that should be some indication of respect. Fuentes y Guzmán wrote in 1690 that those who frequently ate red pepper were protected against poison, while the Incas prohibited the use chile of chiles at initiation and funeral rites. We do not know why the pods were precluded by the Incas but we console ourselves with the knowledge that Capsicums were associated with lightning bolt in Incan mythology–that we can easily understand.

One of the commonest household uses of chile peppers in cultures all over the world is burning them as a fumigant for vermin ranging from bedbugs to rats. Since fumigation in ancient times was also believed to be protection against vampires and werewolves, we have a good introduction to the concept of the magical powers of peppers.

“Chile is used as an amulet, probably because of its well-known protective pharmacological properties, and in religious ceremonies, witchcraft, and conjuring; its fiery potency is considered a powerful means to any end,” observed Beatrice Roeder, author of Chicano Folk Medicine from Los Angeles, California.

In a ritual from Coahuila, Mexico, chiles are instrumental in countering the effects of “salting,” a ritual to cast a spell on a person to cause them harm, particularly mental problems. Such witchcraft is called maleficio in Mexico. To cast the spell, the evildoer gathers dirt from the grave of a person who died a violent death. Then he or she gathers salt from the homes of three widows, or from the homes of three women named Jane (Juana). The salt is mixed with the soil and is sprinkled in front of the door of the victim.

If the victim finds the salt and soil, he or she burns it immediately and then must counter whatever evil effects are left by smoking them out. To accomplish this sahumerio ritual, on the first Friday of the month, hot coals are placed in a bucket and myrrh, storax, the peeling of a clove of garlic, rosemary, rue, star anise, and Chiltepin chiles are added. The victim carries the smouldering bucket throughout the house, adding extra smoke to the corners where evil may hide, while reciting a prayer that evil depart and good arrive through the sahumerio.

Further, the salting victim must perform another chile ritual. He or she stands outside of the patio, holds twelve ancho chiles in the left hand, plus three pinches of coarse salt, and rubs them over the body in the form of a cross. Then the salt and the chiles are thrown into a fire. The victim believes that burning chiles and salt will cause the malefactor to burn in the same manner. Then the victim recites the following three times: “Ghost of the cemetery, may those who have salted me receive this salt.”

Chiles are considered to be a cleanser for evil eye (mal de ojo), bad luck, and bewitchment among Hispanics in United States, a practice imported from Mexico. This parallels usage among Native Americans in Guatemala. When a child is thought to have the evil eye, the parents spray the child’s face with a mixture of rue, then a little aguardiente (liquor, usually brandy), mixed with a crushed hot pepper, is rubbed on the child’s feet. Another cure for the evil eye calls for mixing a little annatto seed with chile peppers in a cloth bag and passing it over the child’s body while making the sign of the cross. Then the bag is thrown into a fire.

A cure for the evil eye from Coahuila, Mexico, calls for the child to be wiped with the inside of a ancho chile. The child is patted on the head, crosses are made over the eyelids and forehead, and the child is laid on a bed with the arms outstretched in the form of a cross. The chile is wiped over the body to absorb the occult power, and then it is burned. Curanderas often treat the hexing of adults by rubbing the inflamed areas (such as the feet) with whole eggs, a lime, and an ancho chile, which are then thrown into a fire. Perhaps because of their fiery nature, chiles are thought to absorb evil influences, which are then destroyed by fire.

In a remarkable parallel usage between totally different cultures, the East Indian population of Trinidad wraps seven red pepper pods with salt, onion skins, and garlic skins in paper and passes it seven times around a baby to remove najar, the evil eye, which is believed to cause unnecessary crying. Also, green chiles are dropped around the doorway to keep away evil spirits.

Interestingly, however, some cultures believe that the chiles themselves can bring on trouble. Black Hispanics from islands like Cuba and Hispañola, believe that red pepper pods on a doorstep are the sign of a malignant influence, and may give a man the “hot foot.” Likewise, chiles are associated with the luban oko, or “red demon” of the Tsachila or Colorados Indians of the Amazon. This demon is said to suck the blood out of its victims, leaving them “as white as a boiled yuca.” The chiles are burned in a fire while being served in food and the demon is foiled in two ways: he is asphyxiated by the fumes, and he cannot eat any of the food because it is too spicy. Again there is the recurrent image of burning, and this time it is specifically related to the heat of the chiles.

In the American Southwest there is a fascinating witchcraft cure. Two nails are tied together in the shape of a cross with a piece of wire. It is placed in a fire and when it is red hot, it is removed from the fire and placed on a rock. A ristra (string) of small chiles is placed on it, and then some rock salt. The resulting vapors are said to banish any witchcraft in the area.

In the Ozarks and deep South of the United States, an African-American legend holds that in order for peppers to grow out and be hot, you have to be very angry when you plant them. The best peppers are said to be planted by a lunatic!

Now some negativity starts to creep into the lore. “A case of death has been reported due to eating of excessive quantity of chillies,” warned R.N. Chopra in his classic book, Poisonous Plants of India. We doubted that Indians indulged in pepper-eating contests, but when we read that chillies are one of the ingredients in the arrow poison of indigenous Bajak tribesmen of Borneo, we began to wonder how far their powers extended–even to cause death? Again we checked with R.N. Chopra and learned: “In the past, chillies were frequently used in the Orient for the purpose of torture, some of the common methods being by introducing them into the nostrils, eyes, vagina or urethra, and burning under the nose….”

There is no doubt that chiles indeed do have a darker side. In northern Mexico, chiles are still used as a part of a spells to make people ill, or even to kill them. One “potion” consists of a rag that contains chile seed, scorpions, sow bugs, mustard, and a strand of red silk. In a scenario recorded by Isabel Kelly in her book, Folk Practices in North Mexico, another spell proved to be deadly. “Another time they threw chiles through the door of the butcher shop. They were two large chiles anchotes [probably anchos], wrapped in a newspaper. The chiles were ‘prepared.’ They stuck the package in, through a hole in the door. May God receive him, because he fell ill and died.”

Needless to say, I am sobered by these wholly (and holistically) impure uses of chiles. I am heartened, however, by a report from one of my peripatetic friends, Lorenzo Fritz, who travels regularly to South America to live with the Indians, trade for crafts, and collect chile information for me.

He told me that the Aymara Indians of Bolivia conduct a spiritual cleansing ritual in which a mixture of various herbs, flowers, and locoto chile (Capsicum pubescens) are placed in a pail of boiling water. The subject sits on a stool nearby, and a blanket is placed over him and the pail to form a mini-sauna. Lorenzo, who observed the ceremony, noted: “This exercise is said to be an exorcism for malas energías, or bad energies.”

And my friend Gary Nabhan, who is an ethnobotanist, revealed that the Tarahumara Indians of Sonora, Mexico use the tiny chiltepins in curing ceremonies–not to rid someone of a current affliction, but to prevent maladies as a result of future witchcraft. According to Gary, “Such witchcraft is caused by a sukurame sorcerer who uses a special bird called a disagiki as a pathogenic agent to transmit illness. He is the only one who can see the bird, which is no bigger than a finger tip but lives on meat and tortillas. It flies into houses crying ‘Sht! Sht!’ and then eats your food or defecates on you. The only way to prevent its coming is to throw some Chiltepins into the air and eat some yourself. The bird is like no other birds. More like evil people than its feathered kind, it cannot stand chiles.” Neither can sharks, if the Indians of the Cuna Islands off Panama can be believed; they tow chiles behind their boats to ward them off.

Perhaps the oddest legend I encountered came from Jethro Kloss’ herbal bestseller, Back to Eden. He quotes the Standard Guide to Non-Poisonous Herbal Medicine: “A peculiar effect of capsicum is worth mentioning. In Mexico the people are very fond of it; and their bodies get thoroughly saturated with it, and if one of them happens to die on the prairie the vultures will not touch the body on account of its being so impregnated with the capsicum.”

But apparently folklore and the ancient mystical remedies are not enough for devoted chile aficionados. There is now a newly formed cult that has its own Web site on the Internet: the Transcendental Capsaicinophilic Society. According to the tongue-in-cheek site, the cult is devoted to the worship of chiles, the life-long dedication to chile consumption, and making fun of people who “just can’t take that spicy food.” In the Chants and Rituals portion of the site, there is the Litany Against Pain, “to be repeated silently when tempted to complain of burning”:

Teach me, Chile, and I shall Learn.

Take me, Chile, and I shall Escape.

Focus my eyes, Chile, and I shall See.

I feel no pain, for the Chile is my teacher.

I feel no pain, for the Chile takes me beyond myself.

I feel no pain, for the Chile gives me sight.