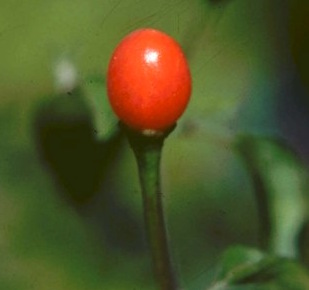 Even among true chileheads, domesticated varieties are the most popular and only a small minority are enthusiastic about wild species. The chiltepin and related bird peppers, the wild forms of the cultivated species, are known to chileheads, but their variations in pod shape and size are not readily apparent. I am enamored of the bird peppers, and particularly the chiltepin, which looks more like a red peppercorn than a chile pepper. So, this article is intended to enlighten those chileheads who think all bird peppers are the same.

The botanical name for chiltepín, following Dunal, Heiser and Pickersgill, is Capsicum annuum var. glabriusculum; the better known C. annuum var. aviculare is widely used, but strictly speaking is not the valid designation. In Mexico and into Arizona and Texas, where it grows wild, it’s considered a delicacy. Its flavor is strong, as is its pungency. As the Mexicans tell it, the chiltepín’s heat is described as “arrebatado”: angry.

While the berry or pod is small–if it’s a true chiltepín, not usually more than pea-sized–the actual plants hold a surprise for many.  While some bird peppers have a hard time growing and hardly reached a foot in height, chiltepín that find conditions to be favorable (the way I do it, in a greenhouse or under netting) easily reach six feet tall. In other words, what started out as a tiny seedling (and even tinier seed than most peppers) by late summer stands as tall as a person.

The chiltepín do have their own peculiarities, however. First off, particularly with seed collected in the wild, seed dormancy is common. My strangest experience was with some chiltepín seeds I had received from Native Seeds/SEARCH in Arizona.  Some seeds I started indoors with lots of warmth had germinated nicely. Another batch didn’t go that way. In May, one to two months after seeding, there was still no sign of any germination. In fact, there was hardly any sign even in July. By that time, the pots were relegated to a place in the garden where they got lots of heat, but also dried out often. Possibly because of the lack of attention, by mid-August it looked like weeds were sprouting up, except it was all seedlings of the chiltepins!

While we all know what domesticated chile pepper plants and their habitats look like, chiltepins are different.  They grow under nurse (shade) trees like mesquite. And judging by their its growth habit, not only under but into them. Rather than forming compact plants, they branch out widely, intertwining into the nurse trees and giving the pod collector a hard time.  In the home garden, netting can be substituted for the nurse trees.

All in all, chiltepíns can be quite difficult plants to grow.  Their bad reputation of being near impossible to grow is not true, however. Frankly, it seems to me that the cultivation problems are more a result of Internet rip-offs (selling bad seed) rather than actual growing problems. Knowing what you are doing and using a decent source of seeds, the germination rate is not all that low.   Soaking the seeds in chamomile tea for a few days, or in a slurry of bird excrement (like that from parrots or parakeets) will increase the germination percentage. Once established, they are beasts to grow only because they need their special conditions as well as lots of space–and, of course, they’ll bite you (but that’s just why we grow peppers, isn’t it?).

When a Bird Pepper Isn’t Necessarily a Chiltepín 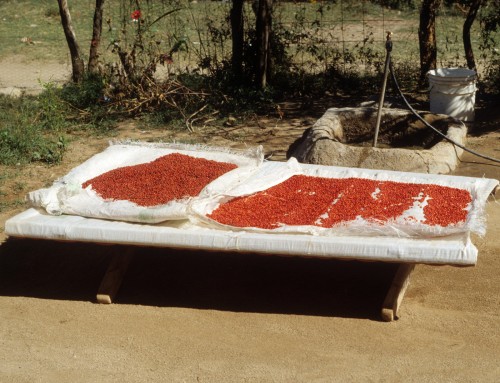 Given the similarities among bird peppers, sometimes it’s quite difficult to distinguish what is a chiltepín and what is not. Some accessions do fit the label very well in all criteria but that the pods are elongated. Or they may still be spherical, but the size of marbles. Pods should show the “soft pedicel” trait, too, that is they should easily separate from their “stem.” In one of the most interesting cases, some plants (incidentally, from seeds I received from Dave DeWitt) produced pods that were rather too big to still be considered chiltepins (unaffected by cultivation or some crossing with another type of pepper), but did show the soft pedicel trait, which is supposed to disappear quickly with cultivation. Other plants from that same batch of seed produced pods that looked more like chiltepines should. However, they did not have the soft pedicel but stayed attached strongly. Go figure.  An examination of the data I collected indicates that–not surprisingly–accessions from wild collection fit both the subspecies and the pod type criteria rather nicely; but accessions from growers show more diversity, likely indicating that there was some crossing.

When I speak of bird peppers (using that as a generic term), I am also referring to the tepin pod type (of spherical to slightly tapered, barely pea-sized pods) that is found among some peppers not C. annuum but are other species that have a wild form.  C. baccatum (to which the South American aji belong) and C. chinense (of habanero fame) also have their tepin-like pods. With the “bird ajis,” a first glance hardly finds any differences. A closer look at the flowers, however, makes things clear: they show the green spots on the corollas so typical for C. baccatum. The pods’ aroma has a fruitier note to it, too.
The charapita, the wild form of C. chinense, has the right shape but its pods are yellow, and what chiltepín has yellow pods? Well, actually, there is a “chiltepin amarillo,” a rare variety, and had I not grown it I still might not believe it exists.  It’s among the chiltepíns growing the tallest and producing the most pods.  For the most part, yellow pod color does not seem to exist among the chiltepín varieties that are wild or closer to the wild form. It is comparatively rare even among the cultivated chiltepíns.
Eating Chiltepíns
Ultimately, the main interest of most people, I assume, isn’t just in the growing, but in the eating. I for one can certainly understand why the chiltepín is considered to be a delicacy. Not only are these pods hot, but they usually have a great flavor, too. The heat is not to be underestimated, but the small size makes dosage easy. And, to my experience uniquely among chile peppers, they contain so little oily substances  that dried pods can be put into spice mills without clogging them up. Differences in flavor between different accessions do seem to exist. Unfortunately, I found too few people (myself included) willing to sample them all. The taste of the dried pods is rather similar, but in the fresh state some variation is pronounced: there are those with such a bite that it has a metallic twang to it, and some are quite bitter, but most taste slightly sweet.

Anyway, considering that they produce reasonably well when conditions are to their liking, and survive for years, I find them eminently worth the effort to grow. I only have one problem right now: I started growing different varieties from the Himalayas and East Asia, but they have to compete for my attention with the many chiltepin plants that did survive overwintering and now live in my living room.