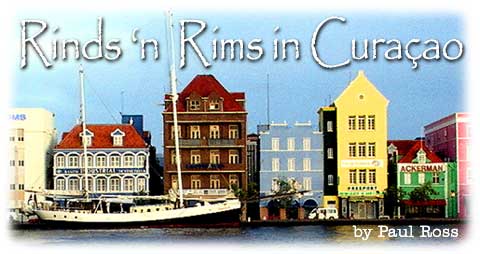 Citrus peels. Cheese rinds. Tire rims. It sounds like a garbage pile, but it’s actually the components of delicious food and drink.

On the Netherlands Antilles’ island of Curaçao, culinary fame derives from two delicacies: the eponymous liqueur and a local Dutch treat named Keshi Yena (stuffed cheese). These comestibles are yummy, rich and –when consumed together— can be so filling that you’ll be hard-pressed to stagger to the nearest warm beach and collapse in the sun ¼where, hopefully, your snores will be masked by the sounds of the roaring surf.

How did these two food items come to be? Well, each has an interesting history tied-in to that of the island itself.

Part of what is now known as the “A,B,C. chain”–the others being Aruba and Bonaire–Curaçao, with its green lushness, fooled early Spanish colonizers to believe that anything could be grown there. Well, almost anything. The large, sweet Valencia oranges that flourished so well back in España grew on Curaçao as the small, bitter hybrid laraha (scientific handle: Citrus aurantium currassuviencis). The fruit is inedible–but, locked in the peel, are unique and aromatic oils which, when alcohol-extracted, became the basis for a world-famous liqueur. (Ironically, its known for its inclusion in Polynesian cocktails like Mai Tais and Blue Hawaiis.) If you want to taste the real thing, you have to go to the island of Curaçao itself because Senior Curaçao of Curaçao, the original distiller (since 1896), has no U.S. sales representation! Because the name of a region cannot be trademarked –think Champagne and Burgundy– popular “Curaçao” is now synthesized by knock-off competitors all over the world. In fact, the popularity of the liqueur is due to the marketing success of one such manufacturer. Bols distillery. While defining Curaçao as “from the Netherlands,” Bols is responsible for the liqueur’s worldwide recognition and even its distinctive color. In its original form, Curaçao liqueur is actually clear (and still is in the familiar premium triple sec variants Cointreau and Grand Marnier). But, according to a Senior of Curaçao spokesperson, “We added color because our main competitor, Bols, made Blue Curaçao world-famous.”

Now, in addition to blue, there are Red, Green and Orange variants. All hues are from food colorings and taste exactly the same. The Senior Curaçao company also has the flavors coffee, chocolate, and rum-raisin.

Their factory is a tiny, hand-crafted operation. Although it’s the second most visited tourist attraction on the island, a “tour” takes less than five minutes before you get to taste the varieties and buy imbibable souvenirs.

Using the traditional Curaçao, you can enhance some mixed drinks (try floating the liqueur in a Piña Colada for an eye-appealing, soothing cooler) or produce more bizarre combos (vodka, 7-up and blue Curaçao makes a tasty blend that looks disturbingly like a glass of window cleaner!).

And here’s some good news for chileheads; you can even cook with the stuff. Pork Chop Sauté a la Curaçao, a genuine Senior company-approved spicy recipe – see below.

During the long ocean crossing, imported cheeses tended to get a bit crusty but, then again, wouldn’t we all? Plantation owners extracted the best part, the inside, for themselves but generously and thriftily gave the rind to the help who cooked the leftovers until it became soft again. Over time, a recipe was developed for filling the hollowed-out rind. (I heard other origination stories while in Curaçao, but the preceding version was the one most often told.)

Still a homemade specialty, Keshi is only served in handful of island eateries but is well-worth seeking out.

You Know the Grill

If you think the native cheese dish is inventive, just wait until you hear what locals do in order to barbecue.

In my travels, I’ve come across grills fashioned from oxy/acetylene tanks, oil drums, discarded farm implements, and even rebar and recycled cyclone fencing. But, on the island of Curaçao, they’re uniquely rollin’ their own. Tire rims, with iron legs welded to them, make ideal charcoal pans. They’re just the right height and depth to control the heat when cooking local delicacies ranging from chicken to iguana (which, to me, tasted more like fish).

Every Sunday, under the trees at Christoffel National Park, local specialties are dished-out by island folk in a setting as authentic as the food itself. It seems an enterprising park ranger noticed that visiting families spent more time in the park than they intended to; they got really hungry but had no place get food. So he drew family and friends together and, if too recent to be called a “tradition,” at least a popular habit was born. The little stand has a coterie of devoted regulars every weekend.

Some dishes (like the almost-fluorescent orange pumpkin pancake) are easy on the eye and bright on the palate, whereas others (the iguana soup–complete with bones, claws and scales) take ether dedication or a developed taste. More than a few potential diners feel squeamish when the prime ingredient in the their main course is running loose under foot. If you want to “go native” and get away from the tourist places–this is it. However, they do not serve Curaçao liqueur.

If you want a glimpse into Curaçao’s indigenous past, Dinah Veeris is the person to seek out. This self-taught botanical historian and highly trained herbalist is resurrecting island folk medicine while saving many of Curaçao’s native plants at Den Paradera, her sprawling garden preserve. Here you can see the famed yet elusive laraha orange in its natural habitat–as well as pick-up a traditional cure for whatever ails you.

There are also some great beaches on the island and any number of them turn into crowded party scenes after dark. (A sampling includes Wet ‘n Wild, Bananas, Hook’s Hut, Blues, Zanzibar, Sea Aquarium, and Mambo Beach. A lot of hotels spill out onto the shore with full bars and grill dining right on the sand. Exotic drink, fine dining, good music and fun are never very far away wherever you are on Curaçao.) It really does look exactly like the images that you’ve seen in movies and on TV!

Sex in the Caribbean usually is thought of in conjunction with the swinging adult Hedonism resort group in Jamaica, questionable establishments tucked-away on various islands or the occasional visits from ETV’s “Wild On.” But tiny Curaçao has a long-standing surprise in this regard. Le Mirage offers governmentally-sanctioned prostitution that has been thriving since the 1940s.

So you can drink, gamble, and party with a hooker on this Dutch island but drugs are forbidden, whereas, in the Netherlands, they are legal. Go figure.

Curaçao has almost no fresh water and meets its needs via a massive desalinization plant. It services the entire island with enough left over to operate a local Amstel brewery. “Bright,” a ‘Corona-esque’ light beer, is a recent island invention now being exported back to Holland!

Warning, warning! This is a powerful drink, so under no circumstances should you drink it and then attempt to capture an iguana.

In a mixing glass, combine the rums, vermouth, Curaçao, orange and lime juices, and Grenadine and mix well. Place the ice in a goblet and pour the mixture over it. Garnish with the orange slice and serve.

In Papiamentu, the Creole dialect, musik di zumbi is “spirit music,” a combination of African rhythms, reggae, and South American music. This cocktail will get you into the spirit, alright!

In a bowl, combine the mango flesh with the water and strain into a blender. Add the rum, Curaçao, lime juice, 1 ½ tablespoons of the sugar, and blend for 1 to 2 minutes.

Place the remaining sugar in a saucer and the Grenadine in another saucer. Dip the rim of a glass in the Grenadine and then in the sugar. Fill the glass with crushed ice and pour the blended mixture over it.

Numerous variations on this dish appear throughout the ABC islands, but this is the one most commonly served on Curaçao.

Slice the top of the cheese and preserve. Gently scoop out the inside, leaving a 1/4 to ½ inch shell. The cheese should resemble a hollowed out pumpkin.

In a large skillet, saute the vegetables, seasonings and meat in the vegetable oil; simmer for about 20 minutes. Beat 4 eggs and stir into the mixture. Spoon into the cheese shell, replace the top and spread remaining beaten egg on top to seal. Grease a shallow baking dish and fill it with about 1 inch of water. Set the cheese in the dish and bake for 1 to 1 ½ hours at 350 degrees F. The cheese will expand and flatten slightly but keep its basic shape. Serve hot, cut into wedges.

It’s going to be difficult to find iguana at your local supermarket, so I suggest you substitute fresh tuna or chicken for the reptilian meat. Since the spices and other ingredients are the same as used in Curaçao, you will have rough approximation of the dish. Note: As this recipe cooks, you might have to adjust the consistency with more water or coconut milk.

In a bowl, toss the meat with the lime juice. Cover and while the meat is marinating, combine all the remaining ingredients, except the whiskey, in a large pot or stock pot, and bring to a boil. Reduce the heat, cover, and cook over low heat for 45 minutes.

Just before serving, add the shot of whiskey and stir well.

This stew recipe includes a small amount of salted beef, another holdover from “the old days,” when that was the only way to ship beef, and it is an ingredient found in almost all the recipes for this stew. The usual meat for the Stoba is kid (goat or cabrito), but we have substituted lamb. If you have a source for goat, try it because it is delicious. The annatto oil is commonly called ruku.

Drain the soaked beef and place it in a heavy casserole with the 4 cups of water. Bring the mixture to a boil, reduce the heat to a simmer, cover, and cook for 1 hour. Remove the beef from the pot, cube, and reserve; strain the broth and reserve.

Heat the vegetable oil in the heavy casserole, add the lamb, and brown it. Add the onion, garlic, green pepper, habanero pepper and saute the mixture until the onion is wilted – about 3 to 4 minutes.

Stir in the tomatoes, sugar, lime juice, nutmeg, annatto oil, the reserved cubed beef, and simmer the mixture for 20 minutes.

Add the reserved beef stock and the potatoes and bring the mixture to a boil; reduce the heat and simmer for 30 minutes, or until the potatoes are tender.

Spread the oil in a large skillet and pre-heat to medium high. Brown the pork chops on both sides. Place a slice of onion on each chop. Sprinkle the sage and ground cloves over the onion slices. Add salt and pepper to taste. Cover and cook over low heat for 6 minutes. Pour in 2 ounces of Curaçao liqueur, dust with hot chile powder. Add 1/4 cup of warm water and cook very slowly for 20 minutes or until done. Serve on hot platter with wedges of blanched oranges

Story and Photos by Paul Ross