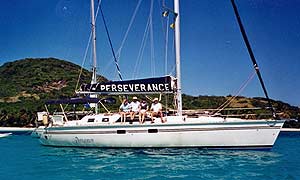 I gazed down from 20,000 feet at shimmering aqua blue waters surrounding the Windward Islands, wondering what hot pepper encounters lie ahead on this Caribbean trip. It had been several years since I was down island. Back then, I was part of a TV production crew filming hot & spicy cuisine in Jamaica for Dave DeWitt’s series Heat Up Your Life. I had learned quite a bit about Scotch Bonnet peppers, habanero peppers, and jerk seasoning.But this trip was for pleasure, not business. My wife, Hettie and I were headed to St. Vincent to join friends on a 7-day sailboat journey through the Grenadine Islands. Throughout the West Indies, spicy foods are easily found with each island offering its own distinctive twist. I was anxious to see what this region had to offer.St. Vincent and the Grenadines (SVG) is an island nation located toward the bottom of the Lesser Antilles, just north of Grenada (have map graphic). Many claim that these islands are how the Caribbean was 40 years ago. I think this is probably true. Much of the tourism comes from yacht chartering visitors like ourselves rather than from huge cruise ships that hold hundreds. This was promising. Perhaps the local hot and spicy cuisine would not be altered since hoards of Carnival Cruise tourists do not overwhelm these islands like other parts of the Caribbean. I would not be disappointed.

The fire of these islands is alive and well.Our first adventure started in Kingstown, the bustling capitol city of SVG. It was here that we met our driver Oswald Holder who took us on a day tour through St. Vincent’s lush, tropical countryside. Driving through the fertile Mesopotamia Valley, we stopped roadside for a fruit snack. While eating scrumptious samples of mango, banana and paw paw (papaya), I asked the fruit stand owner where I might find peppers on the island. “Right here in de bush, mon.” he said pointing over his shoulder. Sure enough, there were pepper plants growing only a few yards away in the thick vegetation with 2-3″ fiery red pods ready for picking. I grabbed a few and brought them back to the fruit stand.”What kind of peppers are these?” I asked.”Bush Peppers, mon.” said the fruitman.It was all coming back to me. In the Caribbean, peppers often get their name simply by where they are found. If pepper plants grow near where the goats graze, they are called Goat Peppers. In Jamaica, we found an 12-foot tall pepper plant growing right outside a kitchen window. It’s name? You guessed it — Kitchen Pepper (convenient for the cook who can easily reach out the kitchen window to grab a few pods). So since these red hots were growing in “de bush” next to the fruit stand….. I should have known.We drove on to St Vincent’s second largest city, Georgetown.

It is a funky, backwater place that fell into disrepair after the sugar export market crashed back in the 1980s. But our trusted driver Oswald steered us to Footsteps Restaurant for a huge lunch of creole chicken, cabbage salad, pigeon peas and Piton Beer. I asked the waitress for hot sauce and was brought a bottle of Erica’s Country Style Hot Pepper Sauce– a red-orange, habanero concoction that had plenty of heat with a hint of mustard and vinegar. This sauce can be purchased in the U.S. I later found out that Erica also produces a mango-based sauce that’s not that hot, but wonderfully sweet.The next day, we left St. Vincent on our 43-foot Hunter sloop for the neighboring island of Bequia (pronounced Beck-way). This is a wonderful place known for its ship building, whale hunting tradition and fine eateries. We had the pleasure of dining at the Gingerbread Restaurant located right on the shores of Admiralty Bay where our boat was anchored for the evening. As on many West Indies islands, the East Indian curry influence is found everywhere from roadstand rotis (a rolled flatbread stuffed with a curry filling, often with potatoes and chicken)to full course dinners. We gorged on the latter at the Gingerbread — a shrimp dish served with a coconut milk curry sauce that was delightfully spicy. And so went the trip.

Another day, another island, another curry. Just to break the pace, we headed for the Tobago Cays — an uninhabited aqua mecca with four tiny palm-studded islands protected from the Atlantic by a huge, horseshoe shaped reef. We anchored right behind this protective reef where we were approached by a local boatman named Mr. Fabulous. He offered to sell us lobster which he barbecued on the beach and later delivered to the boat. On nearby Union Island, I had purchased another St. Vincent hot sauce and broke it out for this special occasion. Joy’s Hot Sauce brought fiery jubilation to our crew of five that evening. It is a yellow habanero sauce, and it is as hot as the still-active La Souffriere Volcano on St Vincent’s where Joy’s is made. The bottle has a very unassuming white label with typewriter print, a generic font style found on many locally-made food products in the SVG. That evening the stars were bountiful and appeared so close that they seemed to drip down to the sea. While the boat swayed gently on the anchor, I glowed with the afterburn of Joy’s Hot Sauce, a perfect compliment to our lobster dinner. The mission was accomplished. We had, indeed, found some very distinctive hot and spicy foods in the SVG. A hot time in the Grenadines was had by all.

Island legend holds that the name of this sauce is a corruption of “Limes Ashore!”, the phrase called out by British sailors who found limes growing the islands. The limes, originally planted by the Spanish, would save them from scurvy. We presume that the bush peppers would save them from bland food. Add this sauce to seafood chowders. Note: This recipes requires advance preparation.

Quarter the limes but do not cut all the way through. Open up each lime and rub them with salt. Place the limes on cutting boards, cover them with cheesecloth, and set them in the sun for about a week. Protect them from rain.

The limes will shrink and their skins will turn brown. Rinse the limes to remove as much salt as possible. Place the limes in a large pan, cover with water, and add the remaining ingredients. Bring to a boil, reduce the heat, and simmer uncovered for 1 hour. Cool and strain the sauce. It will keep for several weeks in the refrigerator.

This recipe is quite popular in the Grenadines, where the population does not consider it particularly hot. But I say it creates enough heat to melt the polar icecap! Most people would use a maximum of 2 habaneros, so make adjustments according to your palate.

Marinate the lamb in wine for 3 hours. Remove the lamb and reserve the wine.

In a large skillet, heat the oil over medium heat. Add the lamb and saute until lightly browned on all sides. Add the garlic and onion and saute until the onion is translucent. Lower the heat and add the bay leaves, tomato paste, salt, wine, and the habaneros.

Simmer until the lamb is tender, about 30 minutes. Remove the bay leaves and serve.

Red Stripe beer is the magical ingredient in this ship-shape dish from St. Vincent. Make sure you buy extra beer for the cook; that way, you may get to have the big piece of lobster during dinner!

In a medium frying pan, saute the garlic, onion, bell pepper, and habanero in the butter. Add the rice, beer, shrimp, lobster, and the rest of the ingredients, except the crab. Bring the mixture to a boil, stirring occasionally. Cover the pan and cook over medium heat until the rice is done, about 15 minutes.

When the rice is done, stir in the crab meat, heat for a minute or two and serve on a heated platter.