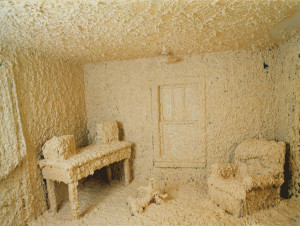 On October 16, 2001, New York-based artist Cosimo Cavallaro dramatically demonstrated his love for chile cheese by covering a house in Powell, Wyoming, inside and out with 12,726 pounds of melted Pepper Jack. The “painting” of the house was part of the town’s “Cheesefest” celebration, which featured a parade and the election of a cheese king and queen. The “fishbait” cheese was outdated and was purchased from Marathon Cheese Corporation in Marathon, Wisconsin., for five cents a pound. The cheese then was melted and pumped through a hose manned by the artist. Cavallaro explained his interest in cheese this way: “It’s milk. It’s life.” The house had been scheduled for demolition,but for a while it shined as a culinary creation–the world’s largest inedible nacho.

The combination of cheese and chiles has a long tradition, as we know from traditional recipes like chiles rellenos and chile con queso. Of course, no one knows who first added chiles to cheese, but the art of adding colorings and flavorings to cheese goes back centuries. Carrot juice and marigold petals were probably the earliest additives and were used to change the color of cheese from its natural white to yellow or orange. Among the earliest flavorings added to cheese were wine, herbs, and black pepper. But chile peppers? As far as we could tell, except for adding black pepper, there are no historical precedents for spicing up cheese, and no traditional chile cheeses from Mexico or Europe. We think that chile cheeses were the result of two trends that collided: the increasing tendency to add flavors to cheese and the heat wave of chile popularity that has swept America and other countries for the past two decades. And it all started with a man named Jacks.

David Jacks was one of the wealthiest landowners in Monterey, California and he had many enterprises, including dairies. He began producing a semi-soft cheese in 1882 that was shipped to San Francisco for sale. It was named after Monterey and Jacks himself–Monterey Jacks–and the “s” was later dropped. The cheese became an American original, and one of the bestselling cheeses in the United States–and the one most commonly flavored, especially during the 1980s and ‘90s.

During that time, California cheese makers experimented with a number of flavorings, including jalapeños. Monterey Jack was thus transformed into Pepper Jack, and cheeses have never been the same. Today, Jack is available in about a dozen different flavors. The most popular are Pesto, Onion, Garlic, and Jalapeño, but a number cheese makers produce more exotic flavors, such as Caraway, Habanero, Green Chile, and even Smoked Salmon.

“People’s needs and tastes change. We have to change with them,” noted Jeff Wideman, Wisconsin Master Cheesemaker at the Maple Leaf Cheese Cooperative, in Twin Grove, Wisconsin. “People want hot — the hotter, the better,” Wideman says, noting that the company’s Habanero Jack has become a hit.

During our research, we discovered an astounding number of chile cheeses. Besides the Pepper Jacks flavored with jalapeños, habaneros, and green chile, there are interesting flavored Jacks from Geissbuhler Family Brand Cheese, Inc.: roasted garlic, tomato-basil, habanero pepper, horseradish, and salsa Jack. The famous cheese manufacturer Cabot’s has a Habanero Cheddar and a milder Salsa Cheddar. Other American chile cheeses include:

Chile cheeses commonly win at cheese contests. For the past several years Biery Cheese Company has captured top honors in the U.S. Championship Cheese Contest, sponsored by the Wisconsin Cheese Makers Association, the largest cheese organization in the world. They out-performed 300 other entries from across the nation, taking first place in the process cheese category with their Hot Pepper Cheese Loaf entry. They also won “Best of Class” at the International Championship Cheese Contest for their Garden Spicy Cheese Loaf, in a field of 500 entries from 13 different countries.

We also discovered that cheeses from other countries are fired up with chiles: 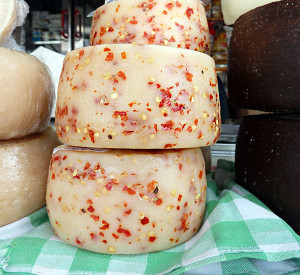 One indication of the growing consumption of chile cheeses is how often they appear on restaurant menus. According the Dairy Management, Inc., over the past three years, menu mentions of Pepper Jack in the top 200 chains have grown threefold compared to a 12 percent increase in general cheese mentions. Part of this increase is attributable to the growing use of Pepper Jack as a topping for pizzas, along with other specialty cheeses.

The most obvious use of chile cheeses is to replace your standard cheeses with them in snacking and cooking. Below are some of our ideas, followed by some specific recipes. 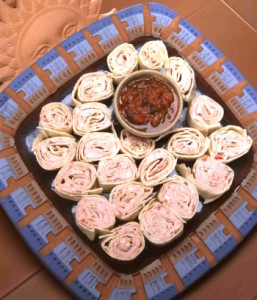 Any chile-spiced cream cheese can be used to make this spicy snack.

Spread the mixture on the tortillas like buttering a sandwich, leaving a 1/2 inch border along the edge of the tortillas.

Stack 2 tortillas on top of each other and roll up real tight. Repeat with the other two.

To keep rolls from falling apart, wrap each one tightly in plastic wrap. Refrigerate for at least 1 hour. 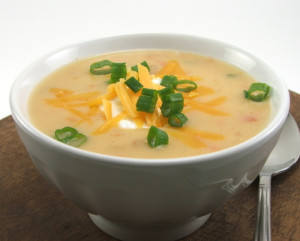 The Texas Jersey Cheese Company, near LaGrange, Texas, makes 750 pounds of cheese a week. The star is a pepper Jack cheese (using large chunks of jalapeño chiles), and this is one of their star chile cheese recipes.

Reduce the heat; gradually add the cheese, stirring until the cheese is melted. Add the half and half and diced green chili peppers. Heat through. Add freshly ground pepper to taste. If desired, add several drops of bottled hot pepper sauce. Garnish with the chive rounds after serving. 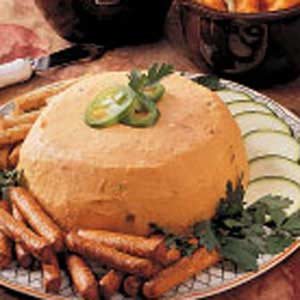 This recipe uses a lot of cheese, but it’s worth it. It is a very attractive ball for a party. Serve with a variety of crackers. Feel free to use chile cheddar and chile cream cheese to make this cheese ball hotter.

Shape the mixture into a ball. Roll the ball in chopped pecans.

This simple appetizer is tasty and quick to make.

Halve the bread loaf horizontally. In a bowl, mix together the creamy Dijon-style mustard and ground cumin. Stir in shredded cheese.

Spread the cheese mixture on the cut sides of the bread. Place the halves, spread side up, on a large baking sheet. Broil, 4 to 5 inches from heat, for 3 to 4 minutes or just until cheese is melted. Cut in slices to serve.

Perfect as a snack or a side dish, this pie is usually served topped with salsa. Dedicated chileheads can also add some hot sauce to the mixture.

Place a cookie sheet in the oven and preheat to 375 F. Cook the bacon in a medium skillet about 7 minutes or until it begins to crisp. Drain off the fat, leaving a thin film to coat the skillet. Add onion and pepper; cook and stir over medium-high heat 5 minutes or until softened. Remove from the heat, stir in the taco seasoning, and let cook slightly.

Sprinkle 1/2 cup cheese over bottom of the pie shell. Beat the milk, eggs, and flour in large bowl until well blended. Stir in the remaining 11/2 cups of cheese and the vegetable mixture and mix well. Pour the mixture into the pie shell and smooth the top of the pie. Place the pie on the hot cookie sheet in the oven. Bake for 45 to 55 minutes or until pie is firm and knife inserted in center comes out clean. (Pie will puff up and then sink when removed from oven.) Cover loosely with foil if the crust is browning too quickly. Let stand 5 to 10 minutes before serving. Serve with the salsa on the side.

Another example of how easy chile cheese is to use is this spin on traditional grilled cheese sandwiches.

Finely chop 4 cheese slices, combine with the eggs in a bowl and set aside. In a pan, sauté the turkey bacon and green onions until the onions are translucent. Add egg and cheese mixture; cook, stirring over medium heat until eggs are set. Remove and keep warm. Butter all slices of bread on one side. Place 4 slices of bread, buttered side down, in a clean skillet. Top each with one slice of cheese and an equal amount of scrambled eggs. Place one slice cheese over the eggs on each sandwich; top with remaining bread, buttered side up. Cook over medium-low heat, turning once carefully, until bread is golden brown and the cheese is melted.

Try this amazingly easy pizza with a variety of chile cheeses for a more interesting, non-traditional flavor.

Heat the oven to 425 degrees F. Place the pizza shell on an ungreased baking sheet. Top the shell with tomatoes, green pepper, chicken, and cheese.

Bake for 12 to 15 minutes or until heated through.