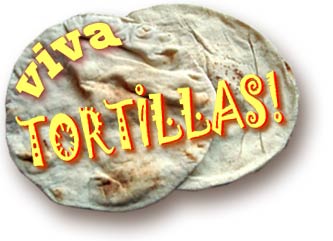 by Dave DeWitt and Harald Zoschke

Tortillas, both corn and flour, have been the basis of Mexican and Southwestern cooking for centuries. No one knows precisely when the first corn tortillas were made from primitive corn called teosinte that was ground on stone metates, but from the archaeological record it was certainly many thousands of years ago. When the Spanish arrived in the New World, they brought wheat with them, and so was born the flour tortilla. Both types of tortillas were originally unleavened, meaning that lighteners such as baking powder or yeast were not used to increase their volume. In that way, they were similar to pita, matzoh, and many Indian breads. However, as we will see in the recipes, some cooks do use leavening agents to lighten up their tortillas. The term “fluffy tortillas” in coming into common usage and although they are not traditional, many people prefer them to the denser varieties. 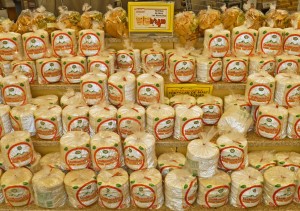 Piles of Tortillas in a Supermarket

Wrapping Up the Tortilla Craze

In 1970, tortillas in the United States were confined to Mexican-American cooking and local restaurants in the Southwestern states from Texas west to California. Then came Taco Bell, a nationally franchised fast food chain that prominently featured them on their menus of tacos and burritos. Many more “Mexican” restaurants flourished and Mexican food came to be defined by the number of different ways corn and wheat tortillas could be used to make the foods that transformed the American language and diet: tacos, enchiladas, burritos, chimichangas, quesadillas, nachos, tostadas, chalupas, and flautas. All are variations combining tortillas, beef, chicken, chile, beans, and various garnishes such as tomatoes and lettuce.

By 1990, tortilla sales has passed $1 billion in the United States and in 1994 had doubled to more than two billion dollars. And these figures are wholesale. In 2000, according to a survey conducted by the Tortilla Industry Association, wholesale tortilla sales skyrocketed to $4.4 billion. By 2002, that figure had been surpassed and tortillas sold $5.2 billion on the wholesale level, capturing 32 percent of the market and trailing sliced white bread by only two percentage points. Industry experts predict that by 2004, tortillas will be the most popular bread in the U.S., with sales surpassing $6 billion.
Certainly the growing Hispanic population and the ever-increasing popularity of Mexican food have been a factors in the astounding tortilla sales growth, but one other trend must considered: the popularity of wraps. Starting in about 1998, many fast food retailers realized that what was wrapped in a tortilla did not have to be Mexican in origin–it could be chicken salad, or avocado and sprouts. The Roly Poly chain of wraps restaurants now has 70 stores in the U.S. offering 50 different sandwich wraps that feature every filling from artichoke hearts and capers to pastrami. Even their tortillas are eclectic, including whole wheat and tomato-basil as flavorings. And established fast-food restaurants such as Chick-fil-A are adding wraps to their menus. 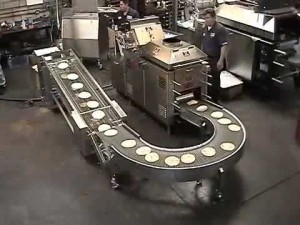 Tortillas are basically a combination of corn or wheat flour, water, shortening, and salt that are made into a dough, rolled out, and dry-fried on a skillet or comal. But of course, cooks provide numerous variations as seen in the recipes that follow. Corn tortillas are softened by quickly frying them in oil before using them in enchiladas. They are also fried hard to make taco shells, tostadas, and the thin strips used in chilaquiles.

Flour tortillas are generally not fried in oil before using them in cooking–the exception is the chimichanga, which is essentially a deep-fried burrito. However, flour tortillas are sometimes cut into wedges and fried hard in oil to make a unique and tasty chip for dipping into guacamole.

When making either corn or flour tortillas, it is necessary to flatten the dough in some manner. They can be rolled out with a rolling pin on a floured flat surface, pressed out with the hands and thumbs, flattened between two sheets of waxed paper, or flattened with a metal or wooden tortilla press. Waxed paper is used on either side of the dough ball in the press to keep the dough from sticking to the press.

Remember that additional flavorings may be added to the dough, especially the wheat flour dough. We have tasted tortillas variously flavored with strawberry, chocolate, chile, butterscotch, and herbs and spices. 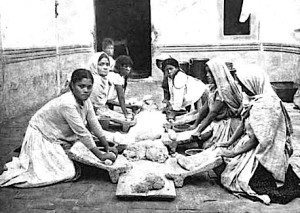 Here is a recipe for unleavened corn tortillas with chile powder added. For a leavened version, see the recipe for Sonoran Enchiladas. The yield will vary as to the size that they are rolled out, but a 7-inch diameter is standard. Feel free to use blue corn masa harina to make the slightly coarser blue corn tortillas.

In a bowl, combine the masa and salt and stir. Add the butter and mash in with a fork. Add the water a little bit at a time while mixing with the fork. Take the dough in your hands and knead thoroughly until it is elastic. Add more water if necessary. 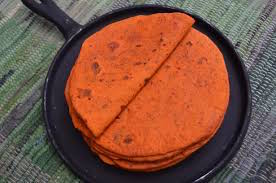 These tortillas are delicious and spicy and can be served alone, stuffed with cheese and rolled, or used as a wrapper for you favorite filling. To make ordinary flour tortillas, simply omit the chile.

Mix the flour, salt, chiles, and butter in a food processor bowl or a bread machine set on Manual. Slowly add the warm water until the mixture forms a smooth, moist ball.

Remove the dough, divide it into 12 equal size balls, cover with plastic wrap, and let the dough rest for 30 minutes in a warm place.

Flatten each ball in a tortilla press or with a rolling pin to the desired thickness, usually about 1/8 of an inch.

Cook each tortilla on preheated, hot griddle with a medium heat. Turn the tortilla every 10 seconds for about 1 minute. As it cooks, it will develop some puffing and some dark spots. Place each cooked tortilla under a terry cloth or linen towel, When you have finished with all of the tortillas, place them in a plastic bag and store in the refrigerator until they are needed. 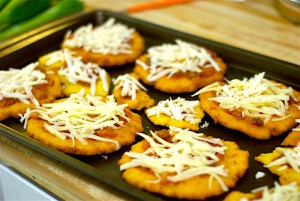 From Antonio Heras-Duran and Cindy Castillo, who took Dave and Mary Jane on a chiltepin tour of Sonora, comes this regional specialty. These enchiladas are not the same as those served north of the border. The main differences are the use of freshly made, thick corn tortillas and the fact that the enchiladas are not baked. We dined on these enchiladas one night in Tucson as they were prepared by Cindy, who is well-versed in Sonoran cookery.

In a saucepan, combine the two kinds of chiles, salt, and enough water to cover. Boil for ten or fifteen minutes or until the chiles are quite soft.

Allow the chiles to cool and then puree them in a blender with their water and the garlic. Strain the mixture, mash the pulp through the strainer, and discard the skins.

Heat the oil in a saucepan, add the flour, and brown, taking care that it does not burn. Add the chile puree and boil for five or ten minutes until the sauce has thickened slightly. Set aside and keep warm.

Mix the first four ingredients together thoroughly, adding enough water to make dough. Knead the dough with your hands. Using a tortilla press with waxed paper, make the tortillas. Deep fry each tortilla until it puffs up and turns slightly brown. Remove and drain on paper towels and keep warm.

To Assemble and Serve

Place a tortilla on each plate and spoon a generous amount of sauce over it. Top with the cheese, lettuce, and onions.

Heat Scale: Medium to Hot, depending on the amount of sauce 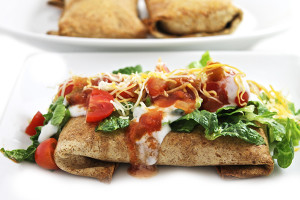 These sweet chicken chimichangas with fruit are lighter than the more traditional beef and bean recipe popular in Arizona.

Saute the onion in the oil until soft. Add the chiles, chicken, and spices and saute for an additional 5 minutes. Add the chopped oranges and mix well.

Wrap the tortillas is a moist towel and place them in a warm oven to soften. Place approximately 1/2 cup of the mixture in the center of each tortilla and top with cheese. Fold the tortilla like an envelope and secure with a toothpick.

Deep-fry the chimichangas, one at a time, in 375 degree oil until well browned. Drain on paper towels and remove the toothpick. 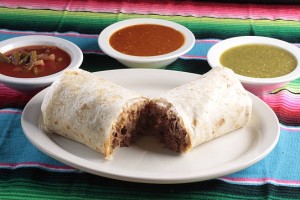 Common throughout the Southwest in home cooking but not so common in restaurants (who knows why?), this savory shredded meat burrito is a meal in itself. The word machaca is derived from the Spanish machacar, to pound, an apt description of the appearance of the meat. This recipe is from our late friend, Barbara Graham.

Return the meat to the pan, add the remaining ingredients, stir well, and simmer until all the liquid has been absorbed by the meat. Place the meat in a large flour tortillas with the tomato, lettuce, cheese, and sour cream, if used. 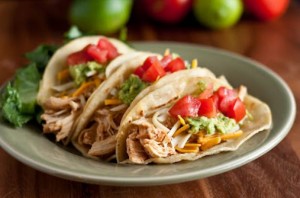 In this recipe, the chicken absorbs the flavors of what it is simmered in. You can use hard taco shells for more traditional tacos if you wish.

Place the piquíns, chicken, 1/2 the onion, and garlic in a pan with enough water to cover. Bring to a boil, reduce the heat, and simmer, covered, for 40 minues. Remove thechicken, allow to cool, and shred the meat off the bones by using two forks.

Wrap the tortillas in a damp towel and warm them in a 300 degree oven.

Saute the remaining onions in the oil until soft. Add the chopped poblanos, tomatoes, oregano, and cumin, and saute for 5 minutes. Add the meat and cook until the meat is thoroughly heated.

Place the meat in the warmed tortillas, and add the avocados or guacamole and cilantro as garnishes. 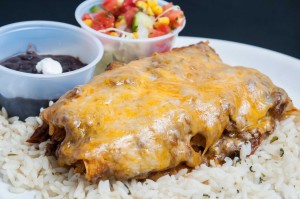 When Harald and Renate Zoschke had their Suncoast Peppers, Inc. office in St. Petersburg, Florida, right next door was the “Kopper Kitchen,” a great family restaurant owned by Fred Tirabassi. Every Wednesday was “Burrito Day,” and Fred’s special of the day was a delicious Cuban-influenced black bean burrito, accompanied by fresh salsa and rice, a vegetarian dish.

Rinse and wash the beans, look for stones. Add the beans to a large pot and add the water. Add green pepper, onions, and bay leaves. Cook, uncovered, for 2 1/2 hours or until done.

In a frying pan, prepare a sofrito by sautéing the onions and bell pepper in the oil. Add the garlic and tomatoes and cook for another 15 minutes, stirring frequently. Add the ketchup, cayenne, and salt and pepper and mix well.

Combine the sofrito mixture with cooked beans. Heat together for 10 to 15 minutes. In the last 15 minutes of cooking, add the vinegar.

For the salsa, mix all the ingredients together in a bowl and let marinate for at least 1 hour to blend the flavors.

To cook the rice, combine it with the water or broth in a large saucepan. Cover and cook on low heat until all liquid is evaporated, about 20 to 25 minutes.

Drain the excess liquid from the beans. Divide the bean mixture on the flour tortillas and top each portion with cheese. Roll the tortillas and heat them until the cheese is melted and tortillas are heated through. (Fred put them on the griddle.)

Serve each burrito with the rice and salsa. Spice up rice with your favorite hot sauce.