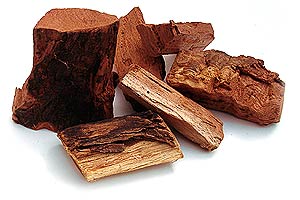 Two of the classic arts of grilling and barbecuing are knowing which woods to use and how to use them. Before I got a gas grill, all I had was a smoker, and I used the main chamber of it to grill meats over wood. It was by far the most challenging cooking I have ever done, because the distance from the coals was fixed, and I had to estimate when the fire was the hottest so the meat would cook before the fire burned out. It is difficult to add wood during the grilling process because it takes so long for it to burn down to coals. Here are some hints about to use wood, and which wood to use.

The Tree with the Leguminous Smoke

You either love mesquite or hate it, depending on whether or not you’re a farmer, hunter, cook, rancher, or woodworker. Farmers and ranchers hate the tree, of course, because it chokes out needed grazing grass, and, as a result of its extensive root system, is nearly impossible to remove from pastures. The ranchers, however, were at least partially responsible for the spread of mesquite over fifty-five million acres in Texas because their cattle passed the mesquite seeds through their digestive systems unharmed, and deposited them in a perfect natural fertilizer!

Yes, mesquite is tenacious, and it’s thorns can puncture tires. That’s the bad side. The good side is that the tree prevents erosion, and it forms a microhabitat for birds and animals in an otherwise harsh environment. A clump of mesquite trees provides shade, humidity, and food for such animals as doves, deer, javelina, and rabbits, which is why hunters like the tree. The tree, being a legume like peanuts, is nitrogen-fixing, so it serves as a host tree for other wild plants such as chiltepins.

The mesquite beans, which are sugar-rich, provide food for both animals and man, and it once provided up to forty percent of the food in the diet of Native Americans in Texas. The wood of the tree is variously shaded, which is why woodworkers love it for making scultures, gunstocks, parquet floors, and other hardwood products.

Cooks love mesquite because its wood produces a very hot flame which is great for grilling steaks. Most mesquite trees these days are being cut down for wood chips and to make charcoal, but there’s such an abundance of trees that there is no threat to mesquite.

Travelers all over the United States will have little trouble finding mesquite-grilled foods. But a hint to the home cook–the wood is used for grilling only because the smoke is considered to be too acrid for the lengthy smoking or barbecuing of meats. For that, pecan or hickory wood is suggested. And if you’re grilling with mesquite, be sure to use aged wood because the green wood is too oily.

Do I really have to state in print not to use construction lumber scraps in your smoker or barbecue? Well, here I go. Most of these scraps are resinous pine or fir; some are treated or contain glue, like plywood. All are useless for cooking or smoking purposes. And, under no circumstances should you grill or smoke over woods such as cottonwood, willow, pine, or poplar. Stick to the woods listed below and you’ll produce great heat and fragrant smoke. And when you consider smoking foods, think of the wood as a spice to add flavor instead of just being a fuel.

The woods that work best for grilling and smoking are hardwoods, particularly (for some unknown reason) the woods of certain fruit and nut trees. We should point out that any of these woods can be used to smoke any meat–we are just commenting on what meats these woods are commonly linked with. Some woods are available locally only where they grow, such as alder and pecan. But most woods are available by mail order or at your nearest barbecue supply store. In most cases, the hard remnants of fruits or nuts of the hardwood trees can also be used in the smoking process. Specifically, we mean peach pits and nut shells but not acorns.

There are other wood-like flavorings to add to the heat source, but we don’t recommend smoking with them for lengthy periods of time because they create smoke that is very intensely flavored. If you like the flavor of coconut, then smoke or grill fish with a little coconut hull added. Also, grapevines make a tart smoke that can overwhelm poultry or lamb. Use it sparingly. Herbs, such as oregano, sage, thyme, marjoram, rosemary, and basil, used both dried and fresh, can imbue the meat being smoked with their own particular flavor profiles. Since rosemary and sage have woody stems, their thick stems can be used as well as the branches and leaves. As with grapevine, a little herb–in either form–goes a long way.

Incidentally, do not burn chile pods to flavor grilled or smoked meat. The pods produce an acrid smoke–so irritating that Native Americans burned huge piles of them in an attempt to use gas warfare against the invading Conquistadors. It didn’t work with the Conquistadors and it won’t work with your Cornish game hen. Apply the chile in the rubs used to flavor the meat, or in the basting sauce, or in the barbecue sauce used to finish it on the table. Or maybe in all of them.

When using the smoker, to start the wood fire in the firebox, do not use petroleum-based starters such as charcoal lighter. They can impart nasty odors. Instead, build the fire in precisely the same way you would do it in your fireplace: crumpled newspaper, kindling made from thin slivers of the wood you are using, and then the large pieces of wood over the top. Allow the smoker to reach the optimum temperature and make sure the smoke is not black but rather gray before you place the meat on the rack or grill for smoking.

To grill with wood, start your fire in the same manner. Let the larger branches burn down to coals. The coals are ready when you can place your hand four inches above the coals for only two seconds. Then it is time to start the steaks or burgers. If you are grilling large portions of meat, or chicken, you may have to add more wood during the cooking process, and in that case, use the smaller branches. For some physics reason, wood coals do not stay hot enough as long as charcoal coals do, so hot and fast is the rule for grilling with wood.

The Jamaican jerk cooks have perfected a technique for cooking pork and chicken that combines the best elements of grilling and smoking. The meat is cooked directly over pimento wood (allspice) coals, but the grills are about fifteen inches above the heat. Smoke is produced by adding green pimento leaves and stems to the coals, and corrugated aluminum is placed directly on top of the meat to catch and retain the smoke.

For cooks who like just a little smoke to their meats, this technique is easily duplicated in both charcoal and gas grills. In a charcoal grill, simply add soaked hardwood chips to the coals and close the lid for a few minutes in the early stages of cooking. With practice, the cook will learn how long to smoke-grill various meats with various woods. This technique is a little trickier with a gas grill. Some have special boxes where you can add wood chips. If lacking those, them place the dry wood chips in a metal pan and place it on the grill next to the meat. Remember, that this is not true smoking over low heat–but it does work, and we defy any grill or smoke proponent to produce better pork than that at the Double-V Jerk Center in Ocho Rios, Jamaica, where I learned the smoke-grilling technique.

I didn’t pay attention one time and over-smoked a goose and it turned into goose jerky. Flare-ups from grilling once caught a fatty piece of chicken thigh on fire, and before I could extinguish it, it started turning black. What ruined the chicken was the flavor imparted by the flare-up–it was very chemical.