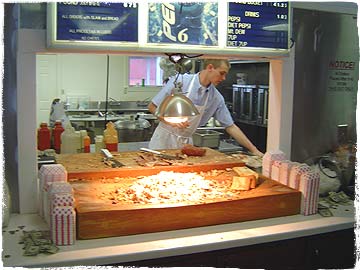 Six days on the road in North Carolina pork country. Twenty-two barbecue restaurants without a beer.
What a challenge—was I up to it?

Ray Lampe, aka Dr. BBQ, didn’t really need a navigator. A former Chicago truck driver, Ray could
certainly find his way around, but when he called me with an invitation to explore the world of
North Carolina barbecue as part of the research for his third book, Dr. BBQ’s Barbecue Road Trip,
how could I refuse? With the help of Mapquest.com, navigating from the shotgun seat of Ray’s
van was a cinch.

The plan was this: we would investigate the differences between Eastern and Western (also called “Piedmont” or “Lexington-Style”) barbecue by eating in every restaurant we could find, schmooze with the local BBQ folks, and pick up on any local legend and lore. Because of Ray’s promotional schedule for his second book, we had less than a week to do it. I began the plan by consulting Bob Garner’s book, Guide to North Carolina Barbecue, and I selected the restaurants based on his comments, especially about which ones still cooked over oak or hickory coals, rather than gas or electric cookers.

In order to keep track of our favorite BBQ joints, we had a simple form to rate each restaurant we visited:

Ray and I would each vote independently and then our scores would be averaged. At the end of the trip, we would know by the scores the Best BBQ, Best Sides, Best Ambience, and Best Overall.

The trip began and ended in Charlotte, so of course we had to check out the BBQ scene there. Near the motel was a BBQ joint called Sonny’s but Ray laughed when I suggested that we try it. It turns out that Sonny’s is the Florida-based, largest barbecue restaurant chain in the country, with 150 locations! Because they didn’t offer N.C.-style barbecue, we didn’t eat there. Bubba’s, the only place we tried in Charlotte, was a huge disappointment, so we moved on.

It was April in North Carolina, so we enjoyed the beauty of the dogwoods and azaleas in full bloom. Lexington, just up the Interstate from Charlotte, has 20 barbecue restaurants in a town of 20,000, so you know how popular this food is there. Although the establishments have “barbecue” or “BBQ” in the title, they are really glorified diners specializing in pork ‘cue, so you can easily opt for a cheeseburger or select from a complete breakfast menu. Despite such temptations, we stuck with barbecue, even for breakfast!

We met with Stephanie Saintsing-Gryder, the organizer of Lexington’s Barbecue Festival at Barbecue Center, and the owner, Cecil Conrad, gave us a lesson of how they cook ‘cue in the western part of the state. He lightly salts 15-pound pork shoulders, using no rub and no basting, and then the shoulders are placed on metal racks in the pit and are cooked over hickory coals (some use oak) shoveled from a burning chamber (see above) into the pit, below the shoulders. With this method, there is virtually no smoke, and the shoulders are cooked at 375 to 400 degrees. The shoulders are removed from the pit, the fat is removed, and they “rest” while the juices drain off. Then the shoulders are chopped coarsely or finely, and are sauced with a thin concoction made from cider vinegar and ketchup mixed together. To Ray and myself, people more accustomed to heavily smoked and sauced Texas-style, Memphis-style, or Kansas City-style ‘cue, this was very, very different. Ray and I were thinking a heretical thought: is this really barbecue or just sauced roast pork? Some places use gas or electric “smokers,” further confounding the situation. As it turned out, because of the lack of smoke flavoring, the gas and electric cookers produced barbecue that was just as good.

Cecil gave us some of the browned crust of the shoulder–it was delicious–and we decided that although it was a different style than we were used to, it was, indeed, barbecue. Next we asked Stephanie about the festival, now in its 23rd year. It’s held on the town square in Lexington, and she said that it attracts 150,000 people to Lexington (is that possible?) during the one-day event in late October that’s held in the middle of downtown. Only seven local restaurants are selected to sell just the signature pork shoulder ‘cue at the festival, but each one serves 1600 to 1800 pounds during the event.

October, “Barbecue Month in Lexington,” features a bicycle race called the “Tour de Pig,” a marathon called “Hawg Run,” the Pepsi “Pig Tales” Creative Writing Competition, and of course, the BBQ Festival High School Air Rifle Match. One of the sponsors is fine Swine Wine from Childress Vineyards! Besides the BBQ, the country music, the Alabama Blues Brothers, the 2005 festival featured a Pig Sand Sculpture, the Barbecue Carnival, a Car Show, racing pigs at the Hogway Speedway, the Festival Chop Shop (with lumberjacks competing in “traditional chopping and sawing events”), and bicycle stunt shows. For more information, go to www.barbecuefestival.com

We were eating barbecue five times a day: one breakfast, two lunches, and two dinners. Often we had to explain to our servers why we were leaving some much food on our plate, but they understood when we told them about our BBQuest. It turns out that this sort of trip was not uncommon in North Carolina, with tourists specifically checking out the barbecue joints.

We heard one funny barbecue joke, “Peg Leg Pig,” told to us by one of the curators of the Davidson County Historical Museum in Lexington. Ralph, an insurance rep, is visiting his customer Homer, who is a farmer. While pulling into Homer’s long driveway, Ralph notices in the yard a pig with a right front wooden leg. After Homer greets him, Ralph asks, “What’s with the pig with the peg leg?”

“Oh, that’s Swine Flew,” replied Homer. “He used to live with aunt Polly. Polly’s house caught on fire and that pig flew into the house and pulled Polly and three other ladies out of the fire. He’s a hero of a pig.”

“Did he lose the leg in the fire?”

“Hell no,” said Homer, “but you can’t kill a hero pig like that, so we only barbecued one of his shoulders for Easter dinner.”

Ray, who doesn’t like vinegar that much, was surprised by how much he liked the whole hog that was served in the eastern towns: both white and dark meat chopped and mixed with the vinegar and red pepper sauce. In a radical departure from tradition, we found a very good sausage at Bill’s in Wilson.

We traveled to the towns and cities of Greenville, Ayden, Kinston, and Goldsboro in the heart of Eastern BBQ country and had very good ‘cue at place’s like King’s BBQ in Kinston, which seats 800 people. It was all very good, but pretty much the same. I doubt that either Ray or I could have picked which was which in a blind tasting, and the main differentiation was in the saucing, and of course I leaned toward the spicier ‘cue.

While traveling in the east, one day I wore the golf shirt that Stephanie Saintsing-Gryder, the Barbecue Festival organizer, had given me. Three waitresses noticed the logo on the front of the shirt and asked me where the festival was held. I answered, “Lexington” and one of the waitresses commented, “I didn’t know that they had barbecue in Kentucky.” I corrected her and informed her that Lexington, North Carolina, claimed to be the “Barbecue Capital of the World,” and she laughed. “Sure they are,” she said sarcastically.

Parker’s Barbecue in Wilson was a trip into the 1950s, with waiters (no waitresses, the only place we encountered like that) in white uniforms with little paper hats, and a parking lot filled as if Parker’s were a football stadium. The average age of the clientele was probably 50. Everybody knew everybody, and we were strangers, but it didn’t make any difference. In the great tradition of Carolina barbecue restaurants, after we ordered, our food was served within five minutes.

In Raleigh, we decided to rate one of the restaurants in the 30-location, North Carolina-only chain called Smithfield’s Chicken and Barbecue. It was a roomy, slickly-designed restaurant with a fast food feel. We ordered at the counter and the food was brought to us quickly–the usual eastern-style pork, more pulled than chopped, with the typical vinegar and red pepper sauce. It was quite good, although the sides and ambience were lacking. Not too bad for a chain restaurant, and it scored in the middle of the pack.

On the table at Smithfield’s was a bottle of Texas Pete Hot Sauce, just like there was in nearly every BBQ joint we visited. This sauce, which contains mostly vinegar and cayenne chiles, is made in Winston-Salem from New Mexican cayenne mash. It is surprisingly tasty considering the basic ingredients, has medium heat, and perks up the barbecue nicely.

We were eating so much barbecue that after eleven restaurants we were openly discussing our yearnings: Ray wanted Italian food, and I yearned for some New Mexico red chile enchiladas. But that was not to be. And not one of these restaurants served beer, so I was drinking the ubiquitous sweet tea.

We were really looking forward to eating at Wild Hogs in Winston-Salem, described by Bob Garner: “Now the visual symbol of the place is a group of pigs dressed in biker gear, riding large motorcycles, which are also called ‘hogs.’” But Wild Hogs was gone, replaced by a strip joint. They probably could not compete with Pig ‘n Out, right up the street, where we enjoyed barbecued chicken for a change. They also had, amazingly, some brisket on the menu, but it was cooked and sauced just like the pork, and that method just isn’t right for brisket.

The side dishes we tasted on the BBQuest were interesting. First, the hush puppies were everywhere, mostly frozen and then deep fried, but we found homemade ones at Clark’s BBQ in Kernersville, where they were made as rings and resembled onion rings. The collard greens (which I love) and coleslaw were excellent, and Clark’s got perfect scores on sides from both Ray and myself—the only place where that happened. Other sides that we encountered on the BBQuest included baked beans, almost always from a can; Brunswick stew, which must be an acquired taste; coleslaw that was always freshly made; grilled onions, which I liked; and corn sticks, which were shaped like a 2 by 4 and are simply not recommended.

Besides the weird brisket at Pig ‘n Out, we discovered some other rather strange ‘cue, like the Barbecue Salad at Clark’s in Kernersville. It consisted of lettuce, tomatoes, cucumbers, and chopped pork, with ranch dressing. It was better than it sounds. Hursey’s Bar-B-Q in Burlington served short rib barbecue, but Chris Hursey confessed to us that the ribs are parboiled first to tenderize them before they are cooked over coals. They were pretty good.

Considering the large number of barbecue restaurants in the state (one book reviews 114 of them) and their enormous popularity, I see North Carolina barbecue as a symbol of resistance to mass market fast food, preserving the local ‘cue tradition while still having the same degree of convenience.

The Skylight Inn in Ayden is a perfect example: during our twenty minutes there, we were the only customers sitting at any of the six tables—the rest, about thirty of them, were to-go customers, African American and white in equal proportion, all ordering the only food entree on the menu: coarsely chopped pork from the whole hog, sprinkled with a sauce of vinegar and red pepper flakes.

Oh, and the Skylight Inn is not an Inn at all, just a local barbecue joint!