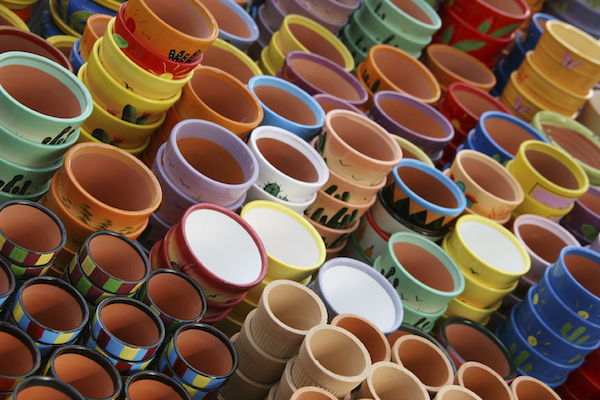 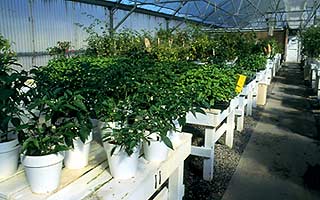 There are many advantages to growing peppers in containers. People who live in apartments and townhouses without gardens can grow peppers and other plants on their balconies, patios, or even in a closet under lights. Fresh pods from potted peppers are available all year long. The peppers can be moved around easily, transforming the peppers from patio plants to ornamental houseplants. They can be rescued from heavy downpours or hail, or moved to areas of varying light levels. In pots, peppers are easier to isolate for plant breeding or to produce pure seed. Treasured varieties can be wintered over in a greenhouse or sunroom and returned to the garden the following year.

Some pepper enthusiasts become so fond of their potted peppers that they turn them into pets. They give them nicknames, take pictures of them to send to relatives and friends, and freely share their pods. This kind of behavior is seems to be unique to pepper growers, so it seems to us that pepper gardening has become a very popular hobby in the U.S.

Fortunately, we’ve been in contact with a number of these pepper hobbyists. During our research, we did not come across any studies done on potted peppers, so we’ve had to depend entirely on our own experiences and those of the hobbyists across the country. 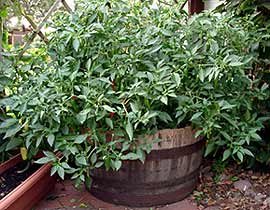 Anything that will hold soil can be used to grow peppers. If the reason for using containers is to expand the size of the garden rather than eventually to bring the plants indoors, then size and appearance is not a problem and the gardener can use fairly large containers such as plastic trash cans, wooden boxes or barrels, styrofoam picnic coolers, and the large plastic, fiber, or metal pots used by greenhouses for shrubs and trees. The ideal size for peppers is five gallons or larger for outdoor growing.

If, however, the purpose of growing peppers in containers is to winter them over, to turn them into perennials, or for breeding, then smaller, more attractive containers should be used. We have had peppers in containers ranging in size from a plastic pot with a 4-inch diameter to a barrel with a 22-inch diameter. With a few exceptions, the larger the container, the larger the pepper plant will grow. Smaller containers restrict root growth, which limits foliage and flower production but they are recommended for gardeners wishing to grow bonzai peppers. Remember that smaller containers will require more frequent watering, and that lighter-colored pots will reflect more solar energy and keep the roots of the plant cooler.Gardeners can use their imaginations when selecting containers. For example, Florida pepper lover Diane Chamberlain reports good success in growing a peperoncino in a hanging pot in her kitchen window when she lived in Japan. “It usually had peppers hanging on it,” she said, “and I used them for cooking.”

At the risk of over-generalizing, we believe that the smaller-podded varieties adapt best to container growing–especially to the smaller pots. During our experiments over six years, we had the best luck with chiltepins, tabascos, and ornamentals. 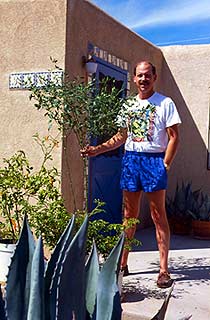 Dave with his tall Arizona chiltepin

One year we grew four different varieties of habaneros in pots and they all did poorly. The same varieties, from Belize, Jamaica, Costa Rica, and Cuba grew slowly but yielded many more fruits in the garden. We repeated the experiment with two other varieties of habaneros in pots, and they performed much better, although the yield was less for the potted habaneros than those planted in the garden.

All of the ajís did well in pots, even the ones which were wintered over in the greenhouse. For culinary use, the larger pods worked better as they were “meatier” and had a more distinct aroma. 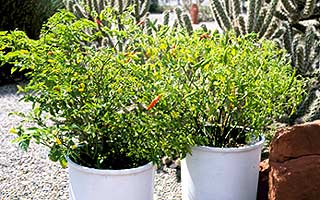 Also, rocotos were dug out of the garden and wintered over in the Albuquerque greenhouse. The following year they had had skimpy yields while the one in the garden grown from seed produced perhaps twenty pods. Rocoto leaves, which are quite pubescent, burn easily in the full New Mexico sun, so we had to either shade them or grow them in a location that received only morning sun. In the Las Cruces greenhouse, they managed to survive in pots and produced well. One rocoto plant survived for seven years in the same pot, but yields decreased from year to year.

Most gardeners report that the New Mexican varieties do not respond well to containers unless they are grown in very large tubs or barrels.

Drainage and Soil. Good drainage is essential regardless of the type of containers chosen for growing peppers. The containers should have large drain holes. To prevent soil from washing out of the holes, plug them with irregularly shaped stones. Some early sources suggest placing a 3-inch layer of gravel to aid in drainage, but this practice is discredited today. Do not place the container in a jardinere or in a saucer because of the risk of the roots sitting in water. Indoors, of course, saucers are a necessity, so just make sure the pot doesn’t sit in water. 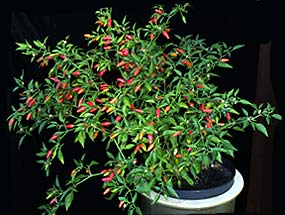 One of the biggest problems with container gardening is the tendency for the plants to dry out and wilt between regular waterings. The major cause of the quick drying is planttranspiration, which is greater than one might expect when the plant has a well developed root system. Another cause of drying is evaporation from the top of the soil, which can be controlled with a mulch of grass clippings–but then it’s hard to see how wet the soil is. The third cause is the type of soil chosen for the container.

Some gardeners have had success with simply digging soil out of the garden and putting it in a pot. Most pepper gardeners add some garden soil to a mix that includes commercial potting soil and other soil expanders. We have had good luck with the following formula: 1 part perlite, 1 part sand, 1 part vermiculite, 3 parts commercial potting soil, and 3 parts garden soil. Another good mixture is 1 part loamy soi, 1 part peat moss, and 1 part sand. Daphne Gould of Boston reports excellent results with a mixture of two parts compost, one part perlite, and one part garden soil, mulched with grass clippings.

Gardeners will have to make some mixes with their own garden soil and judge for themselves what mixture works best. Many sources suggest pasteurizing garden soil before using it in a pot, but that is a tedious process that tends to smell up the kitchen. 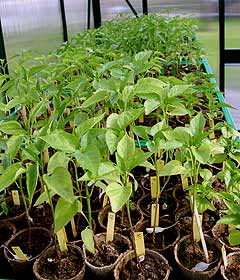 Chile seedlings in Harald’s greenhouse, ready to be repotted.

Location. Outdoors, peppers in containers seem to do best in partial shade or in locations receiving full sun only in the morning. There is a tendency for pots in full sun to absorb solar radiation and heat up the roots too much. However, if the pots are quite large, painted white or aluminum to reflect solar energy, and are well-mulched, many varieties will thrive in full sun. Indoors, the plants will be partially shaded by the movement of the sun, so place them in the sunniest window. In the summer, it’s usually an east or west window; in the winter, a south window is best.

Fertilizing. Peppers in pots generally need a little more feeding than those outdoors growing in aged manure. About once a week early in the growing season, use a balanced liquid fertilizer, such as 10-10-10, diluted even more than the instructions suggest. Fish emulsion seems to work well for organic gardeners. A good slow-release fertilizer is Osmocote, which does not burn the plants and provides a steady supply of nutrients. If the growth of the potted pepper seems more vigorous than that of the same variety in the garden, or if blossoms are dropping, stop using the fertilizer. If blossom drop continues, too much nitrogen has been applied, and the pot should be flushed by running a lot of water through it.

Problems. One of the biggest problems with growing peppers indoors is pets. The plants are chewed by cats, dogs, and birds. Some gardeners put netting over their peppers to keep the cats off, but then they have hidden their favorite plants. Another problem with growing peppers indoors or in greenhouses is that they are more susceptible to the usual houseplant attackers: spider mites, whitefly, and aphids. The best control is to wash the plants at least once a week with soapy water, then rinse them. You can even put them under the shower to spray them off. Be sure to wash the underside of the leaves. 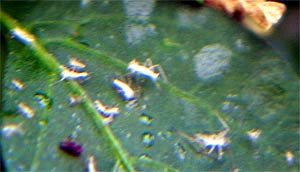 Tiny whiteflies are one of the problems with growing peppers indoors.

Adequate light is needed in the winter, or the plants will cease flowering and begin to drop leaves. Jeff and Nancy Gerlach report they had excellent success with rocotos and other varieties in the south-exposed window of their office in Albuquerque. The light and heat was so intense that the peppers continued to produce pods all winter long. In our north-exposed greenhouse in Albuquerque, however, the peppers went into dormancy and lost many of their leaves.

There has been at least one commercial container farming operation. When Chris Way, of the Dat’l Do It company in St. Augustine, Florida, needed datil pods to produce his various products, he decided to use containers. His reasons were to avoid phytophthora, a fungus that thrives in wet soil and attacks the plants’ roots, and to apply measured amounts of water and fertilizer. Another reason was ease of picking–he built platforms about four feet high to place the pots on so that his “surfer dude” pickers would not have to bend over and risk back injury. After the pots were in place, he ran drip irrigation to every pot. The water was pumped from a nearby lake, and liquid fertilizer could be injected into the system. To foil possible pod thieves, he placed signs around the operation warning of a “watch alligator” patrolling the area! 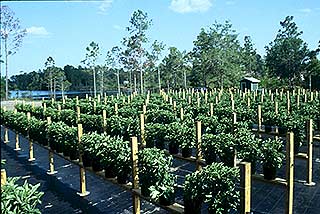 By far, the best selection of chile seeds is Seed Saver’s Exchange, where gardeners exchange their seeds with other hobbyists. You have to be a member to participate. Reach them at http://www.seedsavers.org/ or 563-382-5990. Another good source is the Chile Seed and Plant Ring at http://ushotstuff.com/HotSeeds.htm, which is a group of 25 linked sites all selling seeds or plants. To find even more seed supplies, visit http://www.google.com/ and do an advanced search for the phrases “chile seeds” and “pepper seeds.” There are at least two companies selling a wide variety of chile bedding plants: Cross Country Nurseries, at http://www.chileplants.com/ and The Chile Woman at http://www.thechilewoman.com/. We have ordered from both of these companies and the plants arrived in very good condition and all survived. In Europe, seeds for many varieties are available online at the Pepperworld Hot Shop in Germany (site is in German language).

(This article updated from The Pepper Garden, Ten Speed Press, 1993.)