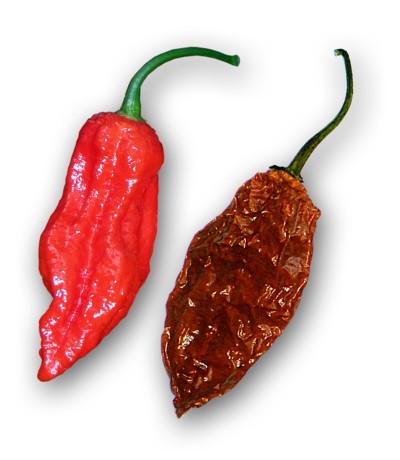 This superhot kitchen situation is not for the faint of hearth!

Over the past few years we’ve seen a dramatic escalation in the heat levels of certain varieties of the species Capsicum chinense, those fiery habanero relatives. When I got started in the fiery foods biz more than two decades ago, the orange habanero was king of the heat hill at approximately 200,000 Scoville Heat Units (SHU). But now, thanks to Dr. Paul Bosland of the Chile Pepper Institute, varieties like ‘Bhut Jolokia’ (seen above, fresh and dried, photo by Harald Zoschke) and ‘Naga Morich’ are commonly available and are five times as hot, topping the heat scale at an astounding one million SHU–and much more. These home growers, of course, get to brag to their friends that they are growing the hottest chile pepper in the world, but once that fun is over, they are struck with the realization that they now have all these pods that are so hot they are nearly inedible. Gardeners are buying up every seed pack they can get their hands on, with the Chile Pepper Institute selling more than 5,000 packs of ‘Bhut Jolokia’, the “ghost pepper,” in early 2007.

As of 2016, the hottest chile pepper in the world according to Guinness World Records was the ‘Carolina Reaper’, at left, with an astounding heat level of 1,569,300 Scoville Heat Units

A few people on this planet are born with very few capsaicin receptors in their mouth, so they are virtually immune to the searing heat of the superhots. But for the rest of us, eating the superhots is sheer torture. Or maybe not.

Here’s the secret: dilution, dilution, and more dilution. Take a lesson from food manufacturers who utilize oleoresin capsicum, or “chile extract” in their products. Of course, some manufacturers are using this refined and concentrated capsaicin oil to make superhot sauces, like Dave’s Insanity Sauce and Blair’s Death Sauce. But far more manufacturers utilize the extract in dilutions to maintain an exact amount of chile heat in their products, guaranteeing that the customer gets precisely the same amount of heat each time they consume, say, spicy potato chips.

So when cooking with the Jolokia kin, think big, like huge amounts of food to be spiced up. To spice up chili con carne, for example, one Jolokia pod could easily spice up three or four gallons of the meaty stew. And there’s a way to do it safely, by juicing the pods as the preferred means of preservation.

In her juicing experiments published on Fiery Foods & BBQ Central, here, Food Editor Emeritus Nancy Gerlach wrote: “I do think juicing works well with the smaller, fleshy, superhot chiles such as habaneros and rocotos. I grow a fair amount of habaneros in the summer and to save them I’ve been freezing them whole. When defrosted they are too soft for chopping so I either use them whole and remove before serving, or in a recipe that is pureed. I tried freezing the juice as well as the pulp, and both were fine when defrosted; so this year I’m going to juice my habaneros and freeze the juice in ice cube trays, and use it in fresh salsas, uncooked hot sauces, and in drinks.” Her tests revealed that six habanero pods produced 1/4 cup of pulp and one tablespoon of highly concentrate liquid. Either can be used in cooking, but to play it safe, use the ice cube trays that make miniature ice cubes, no larger than 1/2- inch cubes. Each tray makes ninety 1/2-inch ice cubes at a time! After freezing, the cubes can be popped out and double-bagged in zip bags and properly labeled.

The cubes can easily be used to spice up large amounts of soups, stews, salsas, and sauces, by adding one cube at a time until the desired heat level is reached. But what about the unique, apricot-like aroma of the superhots? It is not known if this aroma is tied to capsaicin in any way—I don’t think it is. So the frozen chile juice and pulp may lack the aroma when used in such small amounts in cooking. However, I have a couple of solutions for that problem.

There are mild or nonpungent chinenses that you can grow that have the aroma but not the heat. The Chile Pepper Institute sells seed for ‘NuMex Suave Orange’ and ‘NuMex Suave Red,’ and both have heat levels of about 800 SHU, a far cry from 1 million SHU. The pods of these varieties can be juiced and mixed with ‘Bhut Jolokia’ juice or pulp, not only diluting the heat but also preserving the habanero aroma and flavor.

For the future, there is Habanero Pepper TreattaromeTM 9815, manufactured by Treatt USA. Using specialized, proprietary technology, Treatt ensures maximum flavor extraction, capturing the habanero flavor without the heat usually associated with superhot chiles. Manufacturers can therefore incorporate an authentic, well-rounded pepper flavor while controlling spice levels to suit their requirements. However, I seriously doubt that this natural food additive will ever be a consumer product.

But if all you want is the heat, not the habanero flavor, the juicing and freezing method will work especially well in entertaining, catering, and restaurant applications where large amounts of food and drink are being prepared. But you have to be very careful, because the fumes of the processed superhots can cause severe coughing, sneezing, and eye-watering.

Years ago, at the Kapok Hotel in Port of Spain, Trinidad, I cut open a single Congo Pepper and the fumes literally drove us out of the room. We had to open all the windows, turn the air conditioner on high, and it was 30 minutes before we could return to that room. And Congos are only one-fourth as hot as ‘Bhut Jolokias’!

I recommend processing or juicing the pods of the superhots outdoors on your porch, patio, or balcony. If there is a breeze, position yourself upwind from the processing equipment. Always wear protective gloves and a painter’s mask (maybe two) for protection. Never place your face over an open blender, food processor, or juicer. The sooner you can freeze the juice and pulp, the better. You can also keep it in tightly sealed jars in your refrigerator for a couple of weeks.

Below is another preservation method plus some recipes for using superhot juice and pulp. Just remember that all chiles vary in heat level according to the environment where they were grown and the agricultural practices used in growing them, so be careful!

Sidebar: Some Thoughts from a Superhot Chile Grower and Cook

Here is one of the best methods for processing and preserving large quantities of small, superhot chile pods quickly. The method is so basic that it is sometimes overlooked among preservation methods. You should have a powerful blender or food processor for this. To use, defrost the cubes and use them one at a time until the desired heat level is reached. Use this mash in recipes calling for minced or chopped small chiles.

Place the chile pods in a food processor or blender with a little water and process to a medium-thin puree. Take care not to breathe the fumes from the pureeing. Pour the puree into 1/2-inch plastic ice cube trays and freeze solid. Pop the cubes out and double bag them in zip bags. Label and date them and place them back in the freezer. 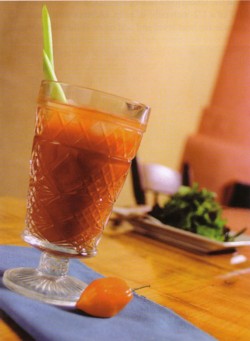 This is a “south of the border” Bloody Mary, substituting tequila for the vodka. But if you are a purist, use the vodka or leave out the alcohol altogether and have a great morning wake-up drink. Adding the rocotos, rather than Tabasco, added flavor as well as warming the drink nicely. The heat came on slowly and lingered. This is one of the best uses for chile juice.

Dash celery salt
Freshly ground black pepper
Salt to taste
Garnish: Lime or lemon wedge
Combine all the ingredients in a pitcher and mix well. Fill two tall glasses with ice, pour the mixture over the ice, garnish with a lime wedge and serve.

Of course, this version of the famous soup will be different from the heavily laden butter and cream recipes of the past.For one, it will have a lot more heat for a cold soup because I’ve replaced the fat with chile juice.This recipe requires advance preparation.The humorist Fran Liebowitz commented, “Cold soup is a very tricky thing and it is the rare hostess who can carry it off. More often than not the dinner guest is left with the impression that had he only come a little earlier, he could have gotten it while it was still hot.”

In a large soup pot, heat the olive oil and saute the leeks and onions until soft, about 10 minutes. Add the stock, basil, and potatoes, and bring to a boil. Reduce the heat and simmer until the potatoes are tender, about 20 minutes.

Remove from the heat and puree in batches in a blender or food processor until the mixture is a very smooth, thin paste. Transfer to a bowl and add the evaporated skim milk, non-fat sour cream, skimmed milk, and white pepper. Mix well, add the equivalent of 1/2 of a 1/2-inch superhot chile cube and taste for heat level, adding more if needed. Cover and refrigerate for at least 5 hours. Serve in cold bowls garnished with minced chives and a sprinkling of red chile powder. 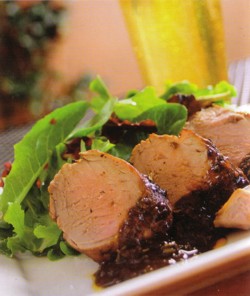 The technique of soaking a food in a liquid to flavor–or in the case of meats, to tenderize the cut–was probably brought to the Caribbean by the Spanish. A marinade is easier to use than a paste, and when grilling your jerk meats, the marinade can also be used as a basting sauce. “In Jamaica,” notes food writer Robb Walsh, “like Texas barbecue, jerk is served on butcher paper and eaten with your hands.” Serve this version of jerk with a salad and grilled plantains.

To make the marinade, combine all the ingredients except the tenderloins in a bowl, including the equivalent of 1/2 of a 1/2-inch cube of pulp, and mix well. Taste the marinade for heat level and add more chile pulp if needed.

Prepare a charcoal grill, adding 2 cups of soaked chips from lemon, orange or pecan wood. Grill over low heat until the interior reaches 140 to 145 degrees F., about 1 to 2 hours, depending on the heat of your fire. Baste the meat with extra marinade during the grilling process. 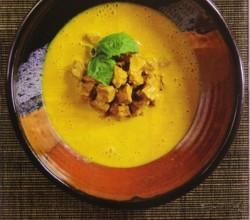 Here is the traditional way the Sumatrans cook the often-tough meat of the water buffalo–by slowly simmering it in coconut milk. This recipe takes some time to make, but it’s worth it. It keeps for months in the freezer, so make a lot. Serve the rendang over rice.

Combine the shallots, garlic, ginger, turmeric, salt in a blender or food processor and grind to a coarse paste. Add the equivalent of 1/2 of a 1/2-inch cube of superhot chile juice and taste to determine the heat. Add more chile juice if you want it hotter.

Heat the coconut milk in a large pot, add the paste and the meat. Cook over low heat, uncovered, for about 1 1/2 to 2 hours, or until the meat is quite tender. Stir the mixture every 15 minutes or so. The sauce will become very thick. Raise the heat and, stirring continuously, continue to cook the mixture until all the sauce has been incorporated into the meat and the meat becomes golden brown, about 1/2 hour. Serve garnished with the basil.

Eggs to Dye For

Eggs to Dye For