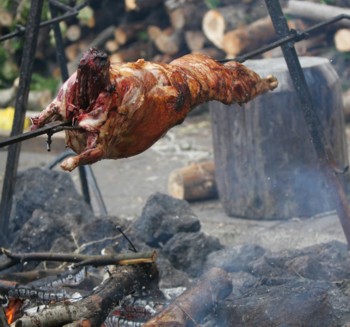 Lamb, once only served in the spring when young sheep were brought to the market in April and May, is now gaining popularity as a year-round festive dinner and, of course, for a traditional Easter or Passover feast.

Generally speaking, lamb comes from a young sheep, ranging in age from one week to one year. A younger lamb has a milder flavor and more tender meat than an older lamb. So-called “hothouse lamb” is two to four months old and has been exclusively milk-fed and “baby lamb” is six to 10 weeks old. The lamb commonly found in supermarkets is anywhere from six weeks to one year old. After one year of age, lamb takes on a stronger flavor and is called mutton.

New Zealand and Australia are major exporters of lamb to the United States, competing against the American lamb market. Most American lamb are raised in Texas, California, Wyoming, South Dakota, Colorado and Utah. The American Lamb Board promotes American lamb has having better flavor and a better value than imported lamb.

“American lamb are fed a combination of mixed grains and mixed grasses,” the lamb board notes. “This feed contributes to a milder flavor and less gamey texture than imported lamb that are fed a diet of mixed grasses only.”

Although lamb may be cooked in a variety of ways, I’ve developed a few favorite methods. I like marinating and grilling a half leg of lamb on the grill’s rotisserie, smoking a boneless sirloin leg for special occasions and preparing Owensboro-style barbecue for anytime eating.

Owensboro, in the western part of Kentucky, is the undisputed capital for lamb and mutton barbecue, and the home of the annual International Bar-B-Q Festival in May. Unlike Kansas City Barbeque Society competitions that feature pork, chicken and beef, the Owensboro competition highlights chicken, mutton and burgoo (a thick soup made with mutton, beef, chicken and vegetables).

The Old Way of Smoking Lamb

One of the more popular ’Q joints offering mutton in Owensboro is the Moonlite Bar-B-Q Inn on West Parish Avenue. Moonlite has been serving hickory-smoked Kentucky barbecue—mutton, burgoo and country ham—since the 1950s. What began as a 30-seat roadside restaurant in 1963 is now a 350-seat restaurant, a USDA inspected processing plant, a catering department capable of serving up to 15,000 meals, a wholesale division serving the four-state region and a busy take-out operation.

Moonlite prepares its 14-hour pit-cooked mutton chopped or pulled, and serves two sauces at the table: a dark-orange sauce with a vinegar-tomato flavor and the “barbecue dip” that is the same vinegar and Worcestershire sauce concoction used to baste the mutton during cooking. They also offer a “Hot Bar-B-Q Sauce” and another sauce simply called “Very Hot Sauce” for those that want to add more spice to the meal.

When you’re cooking lamb at home, keep in mind that although lamb may be cooked the same as beef, it’s best when marinated with olive oil, garlic and herbs and then slow-cooked over an indirect fire until it reaches an internal temperature of 145 degrees F (about 20 minutes per pound plus 25 minutes for a boneless leg). The flavor of lamb and mutton is complemented with fresh parsley, thyme, rosemary and black pepper. 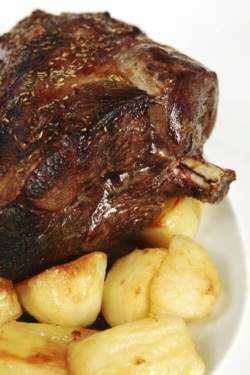 Leg of lamb is a classic holiday meal but with the availability of lamb year-round it is becoming more and more common on the dinner table. A whole lamb leg is too large for mast families so the leg is usually cut into two sections:  the lean shank half and the tenderer (but bonier) sirloin half. Lamb shoulder which is less tender and less expensive could be substituted. This recipe requires advance preparation to allow the lamb to marinate overnight.

Prepare the paste by combining all the paste ingredients except the oil in a food processor or blender and process to combine. With the processor running, pour in the oil and continue processing until a paste forms. Spread the paste generously on the lamb. Place the lamb in a resealable plastic bag and refrigerate overnight. Remove the lamb from the refrigerator and let stand at room temperature for 30 minutes.

Prepare your smoker or indirect grill with hickory and cherry and bring it to 220 to 250 degrees F. Add the rosemary springs to the coals and place the lamb, skin side up, in the smoker or between the two piles of coals on the indirect grill. Cook for 30 minutes and then turn the lamb skin-side down; continue smoke-cooking until the lamb is medium-rare, about another 20 minutes per pound. The internal temperature should be 140 degrees F.

Remove the lamb when done, tent with foil, and let it rest 10 minutes before slicing. Garnish with a drizzle of olive oil and fresh mint. Serve with roasted new potatoes and onions and steamed asparagus.

My youngest daughter recently visited Tibet and Nepal. She came back with this recipe that I’ve modified a bit. Traditionally, Sukuti is prepared with a dried meat, almost like a jerky. This recipe could also be prepared with beef or buffalo although beef is never eaten in Nepal. This recipe requires advanced preparation to allow the meat to marinate.

Combine all of the ingredients, except the lamb, in a blender and process into a smooth paste.

Mix the lamb pieces with the spice mixture in a large bowl; cover and marinate for at least 2 hours.

Prepare a grill for indirect cooking and place the lamb pieces on the cooler side of the grill. Smoke for about 1 hour or until the slices are slightly crisp. Serve with wild rice pilaf, seasonal vegetables and chutney.

This is my take on the pulled mutton served at the Moonlite Bar-B-Q Inn. It’s not their recipe but the final outcome is pretty close to their great mutton buffet offerings.

For the basting sauce:

Combine the rub ingredients in a small bowl and mix well.

In a medium saucepan over medium heat, combine the basting sauce ingredients and bring to a simmer, stirring occasionally. Use this to mop the roast every hour during cooking and as a dipping sauce at the table.

Generously season the roast with the rub and place the roast, fat side up, on the cooking grate. Cover and cook for one hour. Baste with the warm mop and continue cooking, basting every hour and replenishing the coals as needed, for another 8 to 9 hours or until the roast has an internal temperature of 145 degrees F. Remove the roast from the grill and allow it to cool until it can be shredded.

Terry Stinnett, a barbecuer who lives about 10 miles from Owensboro, has been cooking mutton at church benefits for more than 20 years.

Terry is also a certified barbecue judge for the Kansas City Barbeque Society and travels to 15 to 20 competitions a year. He usually competes in a handful of barbecue competitions each year.

“We cook the meat over an open cinder block pit,” he notes. “Logs of hickory for flavor, oak for heat and sassafras for flavor are alternated in the bottom and the fire is about four feet from the meat. It will cook about 12 to 14 hours. As it is cooked, it’s turned every hour. The finish dip or sauce is applied about two hours before the meat is done.”

The open pits are dug four feet into the ground and are about 20 feet in length and 54 inches wide, he said. Large heavy screens are laid atop the cinder blocks to hold the meat.

Here’s his recipe for mutton mop, to be applied during the last 2 hours of cooking. It’s been scaled down from the original 3-gallon batch.

Combine all the ingredients in a large stock pot and bring to a boil over medium-high heat. Reduce heat and simmer for 10 minutes.