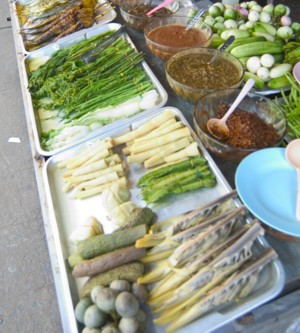 Story and Photos by Austin Bush

A Variety of Nam Phriks and Other Ingredients
in the Market in Satun, Southern Thailand

The first Thai dish I ever learned to make is probably the simplest Thai dish of all: nam phrik kapi, one of the most common dishes in central Thailand. Using a mortar and pestle, I ground up a few small chiles with a couple cloves of garlic, squeezed in the juice of a lime, added sugar and a heaping spoonful of the pungent shrimp paste known as kapi. I learned to mash this mess together until a thick gray muck resulted.

Nam phrik, literally “chile water,” is the name of a family of spicy dips or relishes from Thailand. Normally eaten with rice and fresh or parboiled vegetables, nam phriks are well known to all Thais but rarely seem to make it out of the country. They can even be hard to find in Thai restaurants in Thailand. They are generally homemade, often prepared using a well-worn granite mortar and pestle, and the recipes are as numerous as the chefs who grind them. 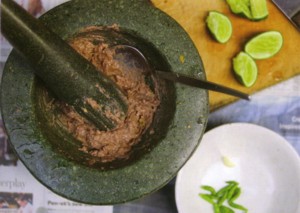 These are probably among Thailand’s oldest recipes, and together with a curry or soup and a fried dish, a nam phrik is one of the essential elements of a complete Thai meal. So established is this dish that it makes a handy and familiar metaphor. A Thai friend recently told me he was “kin nam phrik jaak thuay derm,” literally, always eating nam phrik from the same bowl, an oblique way of saying that he was bored in his relationship.

Stripped down to its most basic elements, a nam phrik will usually be salty, sweet, spicy and sour, although the various ingredients added to produce these flavors vary greatly. In general, chiles, especially the tiny but pungent phrik khii nuu (“mouse shit chiles”) are used to add the heat, fresh-squeezed lime juice to add the sour flavor, and sugar, especially a kind of raw palm sugar called nam taan piib, to add the sweet taste.  Some nam phriks are even flavored with maengdaa, a type of insect that secretes a fruit-like essence that is not as entirely unpleasant as it sounds. There are also “dry” nam phriks, which usually incorporate shallots, garlic, dried chiles and dried shrimp, all fried in oil until crispy, then ground together, and possessing such evocative names as nam phrik narok (“Hell Chile Paste”).

Nam phriks are probably the most regionally variable of Thailand’s foods, and one can usually tell what area of Thailand one is in simply by looking at the nam phrik on the dinner table. Northern Thais, fond of their vegetables, take the slender dark green chiles known as phrik num, roast them along with garlic and shallots, and mash the results together in the dish known as nam phrik num. This nam phrik is traditionally served with parboiled vegetables and deep-fried pork crackling, another northern Thai specialty.

In far southern Thailand, nam phrik kapi is an obligatory side dish in most restaurants, and because the southern version tends to be much spicier than in Bangkok, it is usually served with cooling vegetables such as cucumber. And finally, in the northeastern region of Thailand, nam phrik is often made with plaa raa, a mud-like, unfiltered, unpasteurized fish paste with a smell and taste even more pungent than that of kapi. The most basic nam phrik of all is nam plaa phrik: a small saucer of fish sauce mixed with thinly sliced chiles, and sometimes sliced garlic and lime juice, a rough equivalent to the salt shaker in western countries.

Despite the variety, the single unifying element of nam phrik is in the manner in which they are eaten, and although some extravagant versions exist, the majority are eaten with a simple assortment of raw or parboiled vegetables. This typically ranges from cucumbers to long green beans or eggplants but can also include different regional fresh herbs or roots, such as white turmeric or sawtooth coriander. In parts of Thailand, where steamed rice is eaten, one or two vegetables are placed on a small amount of rice, the nam phrik spooned over this, and the entire package is consumed using a spoon. In other regions where people tend to eat sticky rice, such as the north and northeast of Thailand, the vegetables as well as the rice are individually dipped into the nam phrik by hand, and followed by a bit of sticky rice, also eaten using the hands.

This is the most basic form of the family of spicy relishes known as nam phrik in Thailand. Nam plaa phrik is spooned over one’s rice to spice up bland food, much the way salt is used in the west. 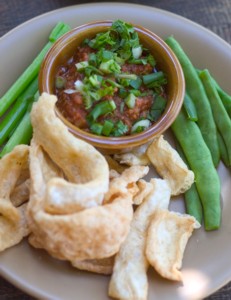 Using a mortar and pestle or food processor, blend the chiles, shallots, garlic, lemongrass, shrimp paste and salt together finely.

With the mortar and pestle, mash the tomatoes into the curry paste.

Heat the oil in a wok over low heat. Add the 2 cloves chopped garlic and fry until crispy. Add the curry paste and tomato mixture and fry, constantly stirring, until the mixture begins to become fragrant, and oil begins to rise and accumulate, about 5 to 10 minutes.

Add the pork and continue to stir until the pork is fully cooked and the oil again begins to rise. If the mixture seems dry at any point, add water, 1/4 cup at a time. Nam phrik ong should have the consistency and appearance of a thick, oily spaghetti sauce.

Nam phrik kapi is probably the most well known nam phrik in Thailand. As the name suggests, it is made with kapi, a salted and fermented paste of fine shrimp known as khoei and is always served with fresh and/or parboiled vegetables, as well as egg-battered deep-fried vegetables, as described below. The amount of ingredients listed below for the nam phrik are largely for reference; a Thai chef would virtually never use measuring instruments to cook, and a dish is usually made to taste, keeping in mind a desired balance of the four tastes: sour, spicy, salty and sweet.

Pea-sized Thai eggplant are hard to find in the U.S., but do look for them in your Asian market. They add a pleasant bitterness to the sauce. If you can’t find them, you can still make the sauce without them. Thai acacia leaves are a springtime treat in Thailand. Basil doesn’t taste anything like it, but will make a fair substitute.

1 Chinese or Japanese eggplant, sliced into 1 cm thick rounds and put in a bowl of water mixed with 1 tablespoon of vinegar to prevent browning

An assortment of fresh Thai vegetables, such as eggplant, cabbage, carrot and green beans, cut into bite-sized pieces.

Using a mortar and pestle, grind the phrik khii nuu with the garlic until a rough paste is formed. Add the sugar and the lime juice and grind together. Add the shrimp paste and continue grinding until a paste forms. Add water. If the mixture is still too thick, add additional water, a teaspoonful at a time (nam phrik kapi should have the consistency of a slightly watery paste). Taste and add more chiles, lime or sugar, to taste. Add the makheua phuang, breaking slightly, but not grinding, with the pestle. Put nam phrik kapi in a serving bowl.

Beat eggs with a few drops of fish sauce or a pinch of salt, divide into two bowls and set aside. Drain eggplant and mix thoroughly with one of the bowls of egg. Heat cooking oil in a wok and taking two or three slices at a time, fry the eggplant in oil on both sides until crispy. Set on paper towels to drain. Remove the tender cha om leaves and blend with the eggs. Fry mixture in hot oil as a thick omelet or frittata, turning over to cook on both sides. Drain on a paper towel until cool then slice into bite-sized squares.

Arrange the fresh and fried vegetables on a plate and serve with rice and bowl of nam phrik kapi.

This is another northern style curry that has become popular among people all over Thailand. The main ingredient is phrik num, long slender green chiles that are almost exclusively used in this particular dish. Use whatever kind of skinny green chiles you can find. Depending on the chiles used, the nam phrik can range from mild to mouth-searingly hot.

Prepare your grill to medium-high heat.

Skewer the chiles, tomatoes, shallots and garlic and grill until charred. Transfer the grilled ingredients to a bowl, cover tightly with plastic wrap and allow to rest for 10 minutes. When the vegetables are just cool enough to handle, peel off burnt outside layer.

Using a mortar and pestle, grind the grilled ingredients together with the salt until blended but still chunky (phrik num should ideally be in long strands or strips).