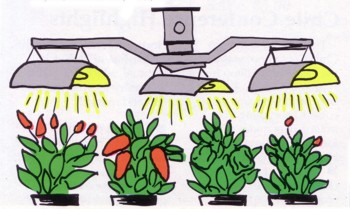 Over the years, our readers have written us about the joys of growing chile peppers indoors with artificial light.  Pepper hobbyist Cap Farmer: “I don’t have to worry about winter freezes or heating a greenhouse because I grow all my chiles indoors, under lights!”  Nancy and John Pierce of New Earth Garden Center in Louisville, Kentucky, feel the same way.  “Our indoor hydroponic chile peppers yield more and grow faster than soil-grown chiles,” they told us.  “Chiles are fairly easy to grow, tend to be high-yielding, and are always a lot of fun.”

The least expensive way to set up an indoor pepper garden is with fluorescent tubes.  They’re relatively efficient, cost little to set up, and a standard fixture accepts two 40-watt tubes.  The number of fixtures to use depends on the size of the growing area, and they can also be placed vertically in corners for side-lighting.  The major problem with fluorescents is that the intensity of light falls off very rapidly as a function of distance.  The tops of the plants must remain two to four inches below the tubes.  Standard cool-white fluorescent tubes can be used, but many gardeners prefer the Sylvania Gro-Lux with its pink and purplish light, or Vita-Lites, which approach 92 percent of the spectrum of natural sunlight.

Until recently, fluorescent grow lights have had a low output and have been too big and bulky to be of much use as a grow light for anything more than starting seedlings.  However, the new compact fluorescent (or CFL ) and T5 full-spectrum fluorescent lights are great improvements that are growing in popularity for both propagation and plant growth. These lights are energy efficient and extremely effective, especially when used in numbers. While not quite as efficient as HID lights, these fluorescents have better color rendering properties (more of the light emitted is used by the plant) and produce much less heat when compared to HID lights. This allows them to be placed closer to plants (within a few inches) greatly decreasing lumen loss from the bulb to the plant.

However, the Pierces report: “Our research indicates that the color spectrum only minimally–if at all–affects plant growth.  The biggest factor in plant performance is enough light, especially for plants setting flowers and fruit.”  To avoid the problem of low light levels on lower foliage, serious pepper gardeners should use high-intensity discharge (HID) lamps.  They are very similar to the mercury or sodium vapor lamps used to light city streets and come in two basic types, metal halide, and high-pressure sodium.  They use more electricity than fluorescent tubes. 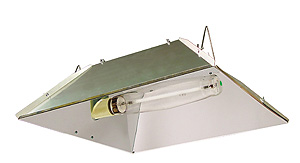 Metal halide lamps have a spectrum like the bright midday sun, while the high-pressure sodium has the spectrum of the early morning or late afternoon sun, which promotes flowering, according to Cap Farmer.  The high pressure sodium lamp emits more lumens of light than a metal halide lamp. HID lights are twice as efficient as fluorescent lights: it would take 800 watts of fluorescents to put out as much light as one 400 watt HID light.

One word of warning.  This equipment is identical to that used by indoor marijuana growers.  The Drug Enforcement Administration has been known to subpoena the records of stores selling indoor growing equipment and to pay visits on indoor gardeners who have ordered it.  One year New Earth Garden Center exhibited at the National Fiery Foods & Barbecue Show and demonstrated their metal halide grow lamps.  After the show, Dave stored the lights under his carport until he had a chance to ship the lights back to Kentucky.  Sure enough, about two weeks later, an undercover state police officer, accompanied by a DEA agent, showed up at Dave’s door and bluntly asked him where the pot plants were.  Dave laughed and showed them his greenhouse with the chile pepper seedlings.  The officers were totally embarrassed and apologized profusely.  Dave speculates that a meter reader saw the grow light boxes and turned him in.  There will be no problem as long as you grow peppers–the legal high.

LED grow lights are the newest lighting option for plants. They are advertised to be the most efficient and coolest running grow lights available. On the ACF Greenhouses website, they report: “We have tested several different types of LED grow lights and have found none that outperform much cheaper fluorescent grow lights of similar wattage. LED plant grow lights are also not recommended for use with plants that you want to be viewed, because they give plants an unnatural appearance when the light is on.”

Either paint the plant growing room white or line it with white trashbags to reflect and diffuse light.  Aluminum foil and mylar relect light but do not diffuse it, causing numerous hot spots unless they are applied evenly, without wrinkling.  Line the floors with white plastic to protect them from spills when watering. 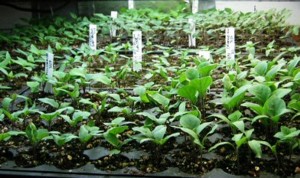 According to Cap Farmer, “the miniature varieties seem to do the best under lights, and I’ve had good success with ornamentals like ‘Ethiopian’ and ‘Black Dallas.'”  Other recommended peppers for growing under lights are, ‘Thai Hot’, ‘Super Chili’, and varieties of piquin, such as chiltepin.

The containers, soil mix, and fertilizing should be the same as with other potted peppers.  The Pierces told us that “indoor pepper gardeners will benefit from an 18-hour light cycle rather than a 12-hour light cycle.  Think of it this way: chiles are long-day plants, yielding best during the long days of summer.  They are not photo-period sensitive.”