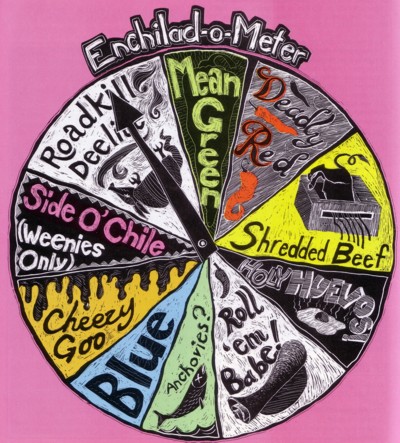 Picture this: you’re sitting in a typical New Mexican restaurant in Santa Fe. There are red ristras on the wall, the smell of roasting chiles in the air, the traditional melody of “I Shot the Sheriff” by Bob Marley blasting from the speakers. You have that eerie sensation known as véjà du–the feeling that you’ve never been here before in your entire life.

Your waitress is dressed granola-girl style, complete with sandals, beaded headband, and a pierced tattoo and professes to be, actually, a native crafts and crystal artist who is just waitressing until her artwork is picked up by enough galleries. She has a bad case of Santa Fe blasé and unless you have your own show on network TV, or paint endless variations on chubby Navajo women examining their big toes, you’re nobody, buster. In fact, she figures you for a gringo tourist from the east who’s going to (naturally) attempt to order the enchiladas. Trouble is, she’s right. It’s time to play the Santa Fe Enchilada Ordering Ordeal.

“I’d like the enchiladas, please,” you state confidently, not realizing you’re about be given the third degree with the same intensity the Commies used on Frank Sinatra in “The Manchurian Candidate.”

“Red or green?” she snaps. She’s not asking about your living room decor but rather the type of chile sauce you want. To avoid seeming like a gringo tourist from back east, you counter with a question of your own.

“Blue or regular?” she asks fiendishly. She’s not inquiring about your mood, but rather your preference for either blue or yellow (regular) corn tortillas. Since you frequent trendy New Southwest restaurants back east, you reply:

“Stacked or rolled?” is her next baffling question. She’s asking whether you want your tortillas stacked, with the filling in between, or individually rolled up with the filling inside. You haven’t a clue as to which one is tastier, but you remember Sophia Loren’s Mexican blouse when she was ordering enchiladas at the cafe in Pancho Villa Rides Again and you answer:

Then she grills you about the filling: “Beef or chicken?” At last, you think, the questions are getting easier.

“Beef!” you shout proudly, remembering how cute Cybill Shepherd looked when she was gobbling hamburgers on the National Beef Council TV spots even though she said in a later interview that she avoided eating red meat. But then the waitress–whose name tag you now notice reads “Spirit Child”–asks a mystical question:

Since you have a bona fide degree from a big shot college back east, you’re smart enough to figure it out on your own that any old meat grinder machine can turn out ground beef, but it takes an authentic, certified New Mexican chef to hand-shred the stewed machacha beef for tacos or enchiladas. You answer:

“Shredded, what else?” with just a hint of sly mockery tinged with studied boredom in your voice. Despite your bravado, you’re ill-prepared for the next question from waitress Spirit Child, which is tricky indeed.

“What kind of cheese?” Face it, you’re stumped. Certainly a fancy-schmancy Santa Fe restaurant wouldn’t serve enchiladas with American cheese like Chi-Chi’s does in Milwaukee. But you once visited Monterrey, Mexico and had a very delicious cheese there, so you take a shot.

“I’d like that white Chihuahua cheese made by the Mormons.”

Who cares? You think. “Cheddar is best with red chile,” you pontificate, making it up. But then you are devastated by her next fiendish question.

“Egg?” she asks with fake innocence.

Panic sets in. If you answer yes, does that mean the chef will mix a cup of scrambled eggs with your shredded beef? If you answer no, are you violating some sacred Santa Fe enchilada-eating ritual? Never fear, the answer is easier than you think. The eggs are fried and should only be accepted with breakfast enchiladas–and, of course, to accompany Easter, Cinco de Mayo, or Mother’s Day brunches. So your answer is a simple:

“Oven, microwave, or radiant heat process?” she asks, but you’re not fooled a bit by this technical jargon. And besides, it’s not your job to cook the damned enchiladas.

“¿Cerveza?” Her sudden shift to a foreign language momentarily confuses you. Then your steel-trap, instant-recall, data base program-like mind accesses a language file and your favorite four letter word appears translated upon the screens of your retinas: BEER?

You dissolve into a pitiful abyss of depression as you realize you have absolutely no idea whatsoever what beer is de rigeur in Santa Fe. But your back-east instincts hold true and you bail yourself out by demanding:

“Have the maitre de send the beer steward with a list.”

Defeated, the waitress slinks off to fling your order at the chef. The beer steward appears from nowhere and reads from a scroll. “To accompany your red-blue-stacked-shredded beef-cheddar-no egg-chef’s choice enchiladas,” he pronounces, “may I suggest a presumptuous but titillating Tusker imported from Kenya, or a more full-bodied Xingu, The Black Beer from the Amazon, or maybe a Mamba?”

“On tap?” you demand haughtily.

“Uh, sorry señor, but only in bottles,” apologizes the embarrassed steward.

Congratulations, you have passed the Santa Fe Enchilada Ordering Ordeal. Now you will be allowed to buy t-shirts emblazoned with cartoon coyotes wearing neckerchiefs.

Cooking the perfect Santa Fe Enchiladas from scratch is a bit of an ordeal in itself, but well worth the time and trouble. If you have extra machaca and sauce, they both freeze well. Serve with refried beans. In northern New Mexico, home-fried potatoes are also served. 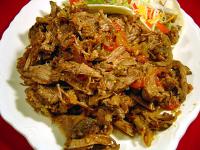 Return the meat to the pan, add the remaining ingredients, stir well, and simmer until all the liquid has been absorbed by the meat, about 30 minutes. 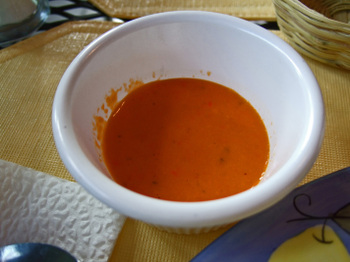 Place the chiles on a baking pan and put in a 250 degree F. oven for about 10 to 15 minutes or until the chiles smell like they are toasted, taking care not to let them burn. Remove the stems and seeds and crumble the pods into a saucepan.

Add the remaining ingredients, bring to a boil, reduce the heat and simmer for 20 to 30 minutes.

Puree the mixture in a blender in batches until smooth and strain if necessary. If the sauce is too thin, place it back on the stove and simmer until it is reduced to the desired consistency. 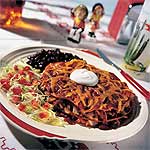 Place a little oil in a small skillet and heat up until almost smoking. Using tongs, fry each tortilla in the oil for about 5 seconds a side, turning once. Do not overcook or the tortillas will be tough. Drain the tortillas on paper towels. Add more oil as needed when frying the tortillas.

To assemble the enchiladas, place a single tortilla on an oven-proof plate. Spread about 1/4 cup of machaca beef over the tortilla, and sprinkle on some cheese. Spread about 3 tablespoons of chile sauce over the cheese. Place a second tortilla over the first, pour about 3/4 cup chile sauce over it, and top with about ½ cup of cheese over it. Repeat with the remaining 5 plates.

Place the plates in a 350 degree F. oven for about 20 minutes. Remove from the oven and garnish with the lettuce and tomatoes.