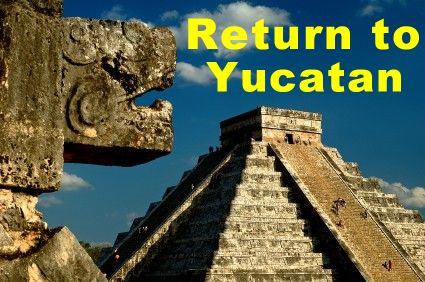 By Nancy and Jeff Gerlach

Ever since our first visit to this part of Mexico, we have felt drawn back to the area, and when we have to return home we feel as though we leave a little bit of ourselves there. We openly admit to being hooked on the Yucatán! And what’s not to like? The weather is just about perfect, the forests and jungles are vast, dense and mysterious, the Mayan ruins are both extraordinary and enigmatic, the palm-lined beaches are heart-wrenchingly beautiful, the turquoise sea is warm, and the people are some of the happiest and friendliest we’ve ever met. On top of all that, the cuisine is unusual, imaginative, and utterly delicious. Since we hadn’t been there in a while, we recently thought it was time to reconnect with the fabulous Yucatán.

Around 1,200 years ago, the Mayan civilization reached its peak in the Yucatán Peninsula. Because it was physically isolated for so long, due to impenetrable jungles and forests on its southern border, and also because it’s just so far from other parts of Mexico, the area has remained Mayan in character since that time. Many features of the culture remain unchanged, including language, dress, housing, and especially food. Certainly, many typical Mexican dishes are popular in the Yucatán , but a rich, distinct, and varied cuisine is unique to the area. In many ways the food was influenced by Cuba and Spain more than other regions of Mexico.

The early Maya were quite fortunate in the variety of local foods that were available, including corn, pumpkins, chiles, tomatoes, avocados, beans, wild game and turkeys, seafood of every variety, and spices such as annatto, vanilla, oregano, and cacao. All of these foods are still prominent in marketplaces and on restaurant menus throughout Yucatán. 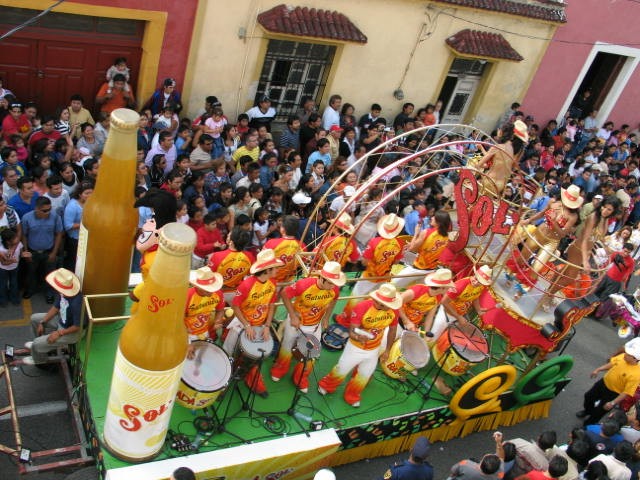 The most important food for the early Maya was corn, which is native to central Mexico. Research has determined that early inhabitants of that area were domesticating corn as early as 5000 B.C. It has also been estimated that corn accounted for up to sixty percent of the daily diet of the ancient Maya. They worshiped a Corn Goddess (among many others) and repeatedly included images of corn in their stone carvings and decorations. Corn remains the basic ingredient in the cuisine of today and is served in one form or another at virtually every meal. Popular snacks called antojitos, or “little whims,” are usually eaten with the fingers, and are nearly all based on corn.

One thing you can always count on when eating in Mexico is that there will be a bowl of salsa or a bottle of hot sauce available. In our travels, we sometimes have to ask for silverware or napkins, but rarely do we ever have to ask for salsa. This is equally true in the Yucatán where they add heat to dishes by using any one of a number of unique salsas and sauces rather than adding chiles when cooking a dish.

Most fresh table salsas in the Yucatán are made with the incendiary habanero chile. This is the chile of choice in the region, and habaneros can be found in salsas and sauces, and piled up whole, for sale in every market. A bowl of chopped habaneros in lime juice is standard on just about any table. Another chile unique to the area is the xcatic, a hot, long, yellow variety that is virtually unknown outside the Yucatán.

An extremely popular and surprising salsa ingredient, although certainly not unique, is the red radish. Markets in the Yucatán are full of big, beautiful, hot red radishes, and although their use in salsas now seems logical (why didn’t we ever think of that?), we did a double take the first time we saw them used in a salsa along with habaneros.

The most famous seasonings from the Yucatán are the recados, or seasoning pastes which are made from spices and herbs such as cinnamon, allspice, black pepper, oregano, cumin, annatto seeds and cloves, along with garlic and, of course, chiles. These unique pastes were developed by the Maya long before the arrival of the Spaniards and are the basis for some of the most popular dishes in the Yucatán, including Pollo Pibil and Cochinita Pibil.

We could go on and on about the unique and marvelous tastes of the Yucatán, but you’re probably wondering what Sunday in Merida has to do with anything. Well Sunday is a special day in this capital city. The streets leading to the main downtown plazas are closed to cars and people ride bicycles or triciclos (large tricycles with a platform or seat between the front wheels), or like us, just stroll. All day long there are bands playing and people dancing. Regional dances are performed by women in brightly colored embroidered huipiles and men dressed in white wearing locally made Panama hats. Vendors sell Yucatecan foods, clothes, gifts and just about anything– including old coins and cannon balls. It’s a fiesta every Sunday!

On our most recent trip we planned our schedule so we would have a couple of lazy Sundays in Merida, but what we didn’t plan on was Carnival! We arrived in Merida late on Saturday night only to find that we couldn’t reach our room as a parade was in full swing and our B & B was on the parade route. Every day in every town we visited we encountered parades, floats and partying, until Ash Wednesday. And that’s part of the fun and charm of Mexico, you never know if a fiesta is just around the corner. 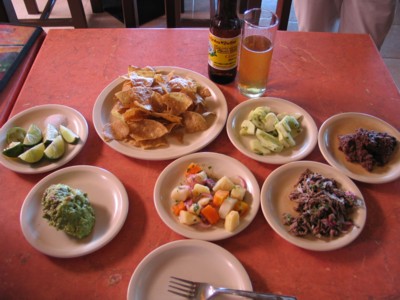 Eladio’s Restaurant and Bar
Various locations in Merida and other cities. Buy a drink and they serve you an amazing array of appetizers such as salpicon, black beans, and guacamole. Buy another and they serve different appetizers. A great way to sample typical foods, enjoy a cold beer, and listen to live music.

Casa Sac Nicte B & B
In downtown Merida in a colonial guest house 4 blocks from the Grand Plaza. Ruy, Guadalupe, and Wil are friendly and very helpful. After our unintended arrival during a Carnival Parade, they helped us get through police roadblocks and even provided us with a much needed cold beer upon arrival.

Sand Castle Inn B & B
On the beach in Chelem near Progresso. Jim and Katie treat you more like family than guests. And Katie who loves to cook will serve you a fabulous breakfast that is more like a restaurant meal rather than the usual rolls and coffee.

This is the most popular of all the different recados and is very typical of the Yucatán. It’s used to add flavor and color to foods, and is most commonly used for pibils. The red color comes from the annatto seeds, which also add a unique flavor to this tasty paste. Available commercially as achiote paste, Recado Rojo is far better when prepared at home. Look for annatto seeds, Mexican oregano and Mexican cinnamon (canela) in Latin markets or from Internet retailers.

Place the annatto, oregano, peppercorns, salt, canela, cloves, allspice and cumin in a spice grinder or clean coffee grinder and process to a fine powder. Add the remaining ingredients and grind to a thick paste, adding a little water if the mixture is too thick.

Allow the mixture to sit for an hour or overnight to blend the flavors.
Yield: 1/2 cup
Heat Scale: Mild

Pronounced roughly “schnee-peck,” it is literally translated as dog’s snout salsa. It supposedly gets its name because it’s so hot that it can make your nose run. This fresh, fiery hot salsa or a close variation appears on most Yucatecan dining tables. Its flavor is best if eaten on the same day that it is prepared.  This salsa will keep for two to three days, if the cilantro is added at the time you serve the salsa.2 fresh habanero chiles, stem and seeds removed, chopped

Combine all of the ingredients except the cilantroin a bolwn and allow to sit for a couple of hours to blend the flavors. Add the cilantro before serving.
Yield: 2 cups
Heat Scale: Hot

Salpicón, the name given to anything cut in small pieces, is a tasty way to use up leftover meats. In the Yucatán, the traditional meat is venison cooked in the pibil style, but pork or even beef can be used. The first time we were served this, we were surprised by the use of radishes, which added not only flavor, but an interesting texture to this appetizer. For variety, add some diced tomatoes or avocados. Serve this as a cold meat salad, an interesting filling for tacos, or as an appetizer accompanying a cold cerveza and crisp tortilla chips.

Mix all of the ingredients together in a bowl and let sit for an hour to blend the flavors. 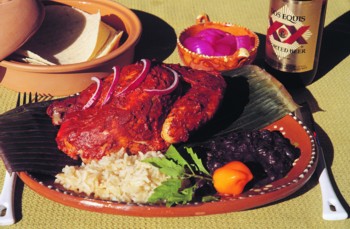 This uniquely Yucatecan dish is available in nearly every restaurant that features local cuisine. Originally cooked over coals in pits dug in the ground, pollo pibil is most often baked in ovens these days. We have had great success in duplicating the pit method by using an inexpensive backyard smoker. We don’t add any wood chips for smoke, but use a pan of water between the coals and the wrapped chicken to keep the chicken juicy. Serve this dish black beans and habanero salsa for a truly authentic meal. Look for xcatic chiles, guero chiles and epazote at Latin markets or Internet retailers.  Note: This recipe requires advance preparation.

Mix the Recado Rojo or achiote paste with the orange juice in a bowl. Prick the chicken breasts with a fork and pour the marinade over the chicken. Marinate in the refrigerator for 4 to 6 hours or overnight.

Saute the onion and chiles in the oil until soft.

Line a roasting pan with the banana leaves, place the chicken on the leaves, pour over the remaining marinade, and top with the onions and chiles. Place a little epazote on each breast.

Fold the leaves over, cover the pan and bake in the oven for 30 minutes.
Yield: 4 servings
Heat Scale: Mild

The bitter orange is a rough skinned Yucatecan fruit that tastes somewhat like grapefruit with a hint of orange. A suitable substitute can be made by using this recipe. I find that using fresh squeezed juices produces the best results.
1/2 cup grapefruit juice
1/4 cup orange juice
3 tablespoons lime juice

Mix all of the ingredients in a non-reactive bowl and let stand at room temperature for 2 hours. Use within 24 hours.
Yield: 3/4 cup

Jeff and Nancy Gerlach are authors of Foods of the Maya: A Taste of the Yucatán, published by University of New Mexico Press. In the summer of 2008, they returned to Yucatán permanently.  They live in a beach house in Chelem, near Progresso, north of Merida.