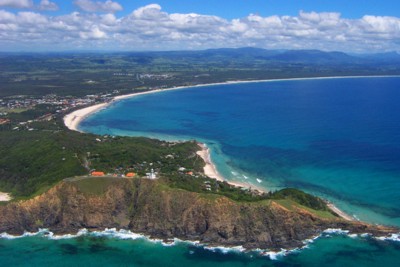 Twenty or thirty years ago in Australia, “meat and three veg” was the standard dinner formula. As far as condiments–tomato sauce (ketchup) was king. But since then there’s been a real shift and interest in spicy foods has taken off. Everywhere you go, people are cooking with chillis, garlic, ginger and coriander (cilantro). Nicknamed Oz by those who love it, Australia is the home of a new food movement I call “Oz Mex.”

As much a state of mind as a food movement, Oz Mex takes its inspiration from the cross-pollination that resulted in Tex-Mex cuisine. But because Australians have incorporated so many Asian flavors into their spicy palates, Oz Mex is also about freedom from conformity and a willingness to be open minded. It’s about celebrating the best in all the wonderfully diverse cultures of this world, and not being afraid to do your own thing.

Nearly twenty years ago, my wife Lynne and I were looking for a new thing and ended up in a little beach town in New South Wales called Byron Bay. Roughly at the same latitude down under as Miami or Puerto Vallarta in the North, we found a patch of red earth where papayas and bananas seemed to jump out of the ground. But we didn’t see any jalapeños growing, so we decided to grow our own. 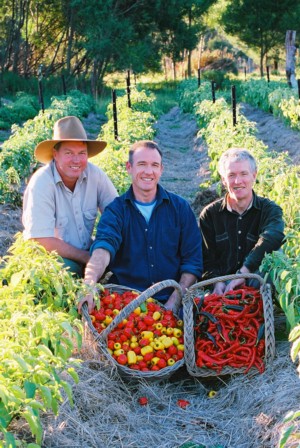 They grow chillis in Australia!

After our first harvest brought more than we could sell, we pickled them in drums and started making salsas, which we sold at the local farmers markets. Like many others before and after, we packed our sauces one bottle at a time, and stuck the labels on while watching TV. Within a year we found a reliable contract packer and were selling salsa in Coles Supermarkets, one of Australia’s largest retailers. That was 1994, the year Byron Bay Chilli Company took off.

Since those early days, a thriving Australian Fiery Foods Industry has sprouted up all over the country. Ashif Mawani, my Kenyan/Indian/Canadian/Aussie mate created our Best Louisiana Style Hot Sauce and the Red Cayenne Chilli Sauce with Lime. And we’ve been lucky enough to team up with one of Australia’s best loved actors, Jack Thompson, on a trio of spicy BBQ sauces from his original recipes. In the style of Paul Newman’s brand Newman’s Own, Jack Thompson’s sauces help fund a local environmental organization, Landcare Australia. We now sell our sauces all over Oz, in the USA/Canada, the UK/EU, Asia, and a couple of South Pacific Islands. And in 2006 our Fiery Coconut Chilli Sauce was voted Grand Prize Winner in the annual Scovie Awards in the U.S.

Nationally, the movement has been nurtured by a national newsletter that became a magazine and later became the annual Fiery Food Festival in Sydney. The Chilli Press, brainchild of Robynne Millward, helped connect a network of hot sauce producers and hot food enthusiasts, organizing them into the Sydney festival.

At the festival you’re likely to run into a crowd full of colorful characters. My old buddy Horrible Haggis is the proprietor of the Redback Chilli Co. and the inventor of Redback Chilli Chutney and Redback Dell’s Devil Relish. He hosts an another annual hot sauce festival in Eastern Victoria every February (our summer time). The Incendiary Dutchman, Marcel from The Chilli Factory, is always happy to blow your head off with his sauces named after Australian animals. And Mary Carmen, a Mexican import herself living in Sydney with her Aussie husband, has a website, Fireworks Foods, with enough hot stuff to make your own fire at home.

As demand has grown, a large scale grower and processor called Austchilli has helped supply the industry with beautiful jalapeño, cayenne, birds eye and habanero chillis. Based in Bundaberg, Queensland, their farm is located near the Tropic of Capricorn, and grows most varieties year round, planting every two weeks. The greater availability of chillis has sparked the creativity of many Australian hot sauce makers.

On the far south coast of New South Wales, the Disaster Bay Chillies grows its own chillis to use in gourmet sauces and wines. Disaster Bay’s Hot Chilli Wine is made from up to nine different varieties of chilies–but no grapes. This totally unique wine won the award for the Best New Product at the Third National Chilli Festival in 2000.

Oz Mex food is showing up in a number of excellent restaurants in Sydney, including Cafe Pacifico, a fantastic restaurant that feels like a piece of Baja California down under. And the premium margaritas are the real thing! If you go, tell Phil that Chilli John sent you. 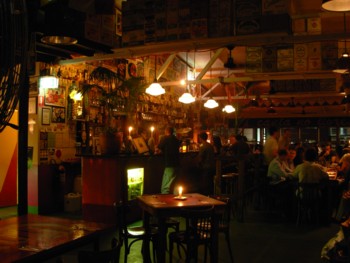 Spicy Links from Down Under

Asian Quesadillas With Mint and Coriander

These quick snacks have a light and spicy Asian twist. You can easily omit the chicken for vegetarian guests.

In a large bowl, toss together the shredded chicken, cabbage, cilantro, bean sprouts, onion, bell pepper and chilli. In a small bowl, whisk together the yogurt, chilli sauce and lime juice and pour over salad. Add the yogurt mixture to the chicken mixture and toss to coat.

Place 1 tortilla on a warm griddle or pan, sprinkle it with shredded cheese, then with some of the salad mixture and fold it in half.  Heat the quesadilla, turning several times until the cheese has melted.
Yield: 12 quesadillas
Heat Scale: Medium

In Australia, we use a long loaf of Turkish bread for these sandwiches, but you can use Mexican bolillos or even Kaiser rolls. As you might expect, the sauce is the secret ingredient. The sandwiches can be assembled, wrapped in plastic wrap and refrigerated overnight for grilling the next day if desired.

In a bowl, whisk together the mayonnaise, sour cream, cilantro and taco seasoning. Slice the bread into four even hunks and split them open, or just split open the rolls. Spread each half of bread with this mixture and drizzle with chilli sauce. On the bottom half, spread some chicken and sprinkle it with salt and pepper. Layer red onion, avocado and cheese on chicken and top with other half of bread. In a dry pan over medium-high heat, on a BBQ griddle, or in a sandwich toaster, toast the sandwiches on both sides until heated through. The bread should be crisp and the cheese melted. Cut the sandwiches in half and serve hot.
Yield: 4 servings
Heat Scale: Medium

Place the fish in a large, shallow dish, sprinkle it with olive oil and lime juice and allow it to marinate for 30 minutes.

In a large bowl, combine the green onion, coriander and cabbage.

In a small bowl, whisk together the mayonnaise, yogurt or sour cream, chilli seasoning and salt to taste.

Preheat a grill to medium low.

Wrap the tortillas in foil and place them on a not-too-hot part of the grill to slowly warm.

On a very clean, thoroughly oiled grate, grill the fish until just cooked through, about 10 minutes per inch of thickness of the fish. Remove the fish to a clean platter, allow it to rest 10 minutes and then slice it into thick strips.

For each taco, place a warm tortilla on a plate, add a few chunks of fish, drizzle with either the coconut or the sweet chilli sauce, a spoonful of salad, then some creamy sauce and more chilli sauce. Make a small fold along the bottom edge of the tortilla, then close from both the sides, creating a little parcel that won’t drip out the bottom.
Yield: 4 to 6 Servings
Heat Scale: Medium 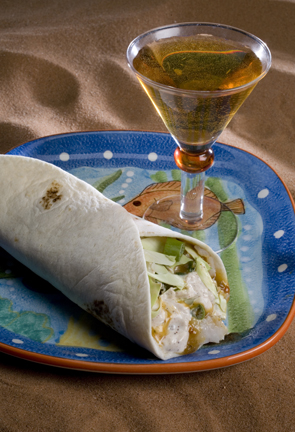 We cooked this during the 2000 Olympics in Sydney, and it has become a big family favorite. If I had to eat only one thing every day for the rest of my life, this would do. Feel free to use leftover grilled beef, lamb, sausage, chicken, goanna, crocodile, emu, goat or whatever you’ve got.

In large skillet over medium heat, reheat the meat and cook the onion, together.

Warm 1 tortilla and lay it on a plate. Top it with a dollop of hummus, several slices of meat, a sprinkling of onion and cheese, a few slices of avocado and a spoonful of sour cream. Drizzle the filling with a bit of Byron Bay Chilli Co. Red Cayenne Chilli Sauce with Lime. Close the bottom and roll up tightly.
Yield: 4 to 6 Servings
Heat Scale: Medium

Mullumbimby is our nearest town. It is hot and tropical, like our Mango Chilli Sauce with Smoked Jalapeños.

Add the oil to a skillet over medium high heat, add the meat and cook until it is browned on all sides.

Add the onion and cook an additional 2-3 minutes.

Stir in the remaining ingredients, cover and simmer for 30-45 minutes. Check the pot periodically. If the sauce gets too thick, add water as needed; it should be nice and saucy.

Serve it over cooked rice or use it as a filling for warm tortillas.
Yield: Serves 4
Heat Scale: Medium