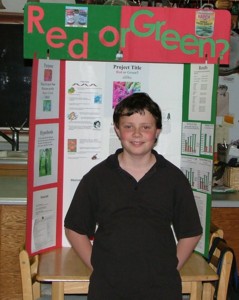 Editor’s Note:  Larry is a 12-year-old student (in 2008) at Route 66 Elementary School in Edgewood, New Mexico.  His favorite food is shredded beef burritos smothered in green chile, and he got this idea for a fifth grade science fair project when he was asked “Red or Green?” while ordering in a local New Mexican restaurant.  He was assisted in a large project like this by his parents Lorilee and Lawrence Gray.  His other interests are video games like “God of War,” riding his ATV, and his pet bearded dragon lizard Rocky.  His teacher is Jill Stewart, who is–coincidentally and ironically–the ex-wife of Robert Spiegel, the founding publisher of Chile Pepper magazine in 1987.  Except for some minor editing to make this study publishable in this format, the words that follow are those of Larry.  Full disclosure: I am paying Larry for the right to publish this study, so he is now a published author.  Also note that in 1999 the New Mexico State Legislature enacted a memorial making “Red or Green?” the official New Mexico State Question.  –Dave DeWitt

If other people like the mild and flavorful taste of green chile like I do, then more New Mexicans will prefer green chile to red chile. 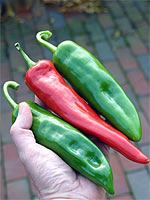 First, I decided to survey restaurants to see what their opinion was on the Red or Green question. My dad and I made a survey form to include the restaurant name, their address, their phone number, the name of the person contacted, and the percentage of red or green chile they serve. We looked in the Yellow Pages and randomly selected 15 restaurants as this seemed like a reasonable amount. We made the telephone calls and recorded the information on the survey form.

Second, I did the same thing for Mexican Food distributors as I did for the restaurants but as there aren’t that many of them, only 5 were selected and recorded on the form.

Last, we made a form to survey New Mexicans on which they preferred but this time with the persons name, age, sex and what they preferred–red or green–on the form. The age and sex were included to see if age or sex was a factor in what they preferred.  To get a good amount of opinions but still spend a reasonable amount of time we decided to survey 100 people. We wanted an equal amount of males and females, so 50 of each sex were selected and we tried to get a mixture of males and females in each of the 5 age groups. The age groups were decided by looking at other surveys we could find. The age groups decided on were under 18, 18 to 29, 30 to 44, 45 to 59 and 60 and over.

As there weren’t really any major safety issues on this experiment, no precautions were necessary except for an adult to be with me and to get the store managers permission to do the survey on their property. We were very polite in approaching people and asking if they would take the survey and that it was for a school science project. Not one person said no and many seemed very excited to do it and wanted to know more about the project. Several people did say they liked both equally but since the survey question was which “one” do you prefer, we asked them if they could only have one which one would it be. They all chose green. Several others didn’t like chile at all and were not surveyed. A few more were from out of state so we did not survey them as the purpose question was specifically what do New Mexicans prefer.

I discovered that outside of New Mexico most people never eat green chile and that in most foreign countries, especially, Europe they have never even heard of it.  I think the green chile percentage was higher in the Edgewood area then it might have been in other parts of the state that are closer to the borders of Colorado, Texas or Arizona. Those states are known to eat more red chile sauce or enchilada sauce that is made with red chile. Another survey near those areas would be needed to confirm that.

I expected to find that the percentage of men and women that like green chile would be about the same and that was true. I was surprised to find that as people get older the percentage that like green was the highest of all and by the time they reach 60 almost none seemed to eat red.  This seems to be because the older people I surveyed thought that red chile is often spicier then green and older people have a hard time eating spicy foods.

A couple of the most interesting things I found out were that red chile is just the ripened version of green and not another plant, and that I would not be able to get a green chile cheeseburger at McDonalds in another state. I really enjoyed doing this experiment because of the time I spent with my dad working on it and meeting lots of people doing the survey.