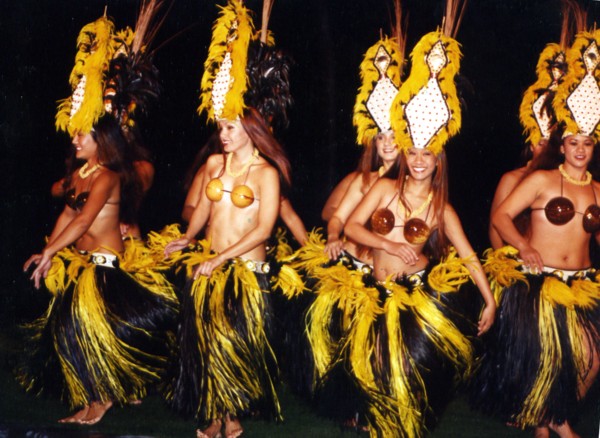 On the mainland, when there is talk of barbecue, we think of the Lone Star State where brisket is king of the ‘Q or the Carolinas where chopped pork slathered in sauce is supremely popular. In Hawaii, barbecue means one of two things: huli-huli chicken roasted over kiawe wood (the Hawaiian version of mesquite) and bought from a roadside stand, or a luau where a whole pig is slow-roasted in a pit known as an imu.Warm tropical breezes, beautiful women in grass skirts, brawny men in traditional Polynesian garb, unlimited Mai Tais and barbecue … what could be better?  In the Aloha State, it’s not barbecue, it’s a luau, the modern word for aha aina, a gathering for a meal in ancient times. (Luau actually refers to the young edible taro leaves that are traditionally used to wrap the food.)

During a recent trip to Hawaii, I had the opportunity to visit two commercial luaus, one on Oahu and another on Maui. The two had similar food, but totally different presentations. If you go to a luau in Hawaii, you can expect the cost to run from $75 to $125 per person depending on the facility and the seating you’ve chosen. It’s expensive, but the cost usually includes unlimited bar privileges.

Our first luau came after an hour-long bus ride from bustling, tourist-clogged Waikiki to the quiet leeward side of Oahu where Ko Olina was once the beach retreat of King Kaméhaméha I’s favorite wife. Here, Paradise Cove is known as the home of Pearl Harbor and the famous North Shore, a haven for surfers during the winter months. The 12-acre beachfront is host to Hawaii’s only imu amphitheater along with several thatched huts offering souvenirs and mementos for visitors. A spectacular sunset viewed from the beach highlighted the evening. As dinner is being prepared, guests have nearly two hours to stroll the grounds listening to Hawaiian entertainers, drinking Mai Tais and perhaps having a temporary tattoo applied, as my daughters opted to do. Opening up the imu to get the pork. 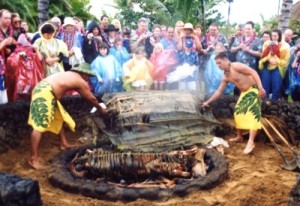 After the dinner, the Paradise Cove Hawaiian Revue is held under the direction of O’Brien Eselu, one of Hawaii’s most popular local entertainers. The show features comedy, some audience participation and Polynesian fire knife dancers along with singing and dancing, all staged under the starlit sky. Opening up the imu to get the pork, above.

Our second luau was on Maui-during a week-long rainy spell-and it had a completely different presentation from Paradise Cove. The Old Lhaina Luau, located in the former whaling capital on Maui, is a well-rehearsed and professionally choreographed stage show unlike Paradise Cove that presented a much more relaxed atmosphere even with its spectacular entertainment. At the Old Lhaina Luau, the food is served buffet-style at two stations on either side of the seating area. (At Paradise Cove, preferred seating includes table service.)

And the food? Bill Martin, who lived on Oahu for nearly three decades and is now a Big Island resident, summed it up best when he told me, “As you might imagine, going to a hotel luau is like looking for real barbecue at Tony Roma’s.” But Martin did have some good advice, too. “If you want the real thing, some parts of a luau are served in Hawaiian cafés; good and authentic. But the real luaus are served out of someone’s home, with sides like poké, lomi-lomi salmon, raw crab, opihi (Hawaiian snails) and poi coming from the local market.”

A true Hawaiian family-style luau has relatives and friends working all day to prepare the celebration that often marks an important family event such as the birth of a child, a graduation or wedding. “Doing imu kalua is a labor-intensive undertaking, requiring cooperation among many male persons and many female persons,” said Bill Martin.

Ed Slavish of Oahu explained, “The real local luaus are usually wedding receptions or babies’ first birthday parties. They involve family and a few friends in a backyard and the entertainment is family members from young kids to tutus (grandmothers) getting up to dance the hula or join uncle who is playing ukulele. It is a mini backyard concert called a kanikapila. Those are hard to find if you haven’t been invited. The commercial operations have more of the traditional food and entertainment.”

Traditional luau fare includes kalua pig: a suckling pig cooked all day or overnight in the imu, an underground oven. To create an imu, a pit is dug and lined with stones. Native wood–kiawe, ohia or guava–is used to heat the rocks. After some of the hot rocks are stuffed inside the pig, banana trunks and leaves top the stones and the pig. The banana creates moisture that steams the pig into a succulent delicacy. The pig is then wrapped in wet burlap, covered with a tarp and then a layer of dirt.

Accompanying the shredded pig is poi, a starchy paste made from pounded taro root, lomi-lomi salmon, teriyaki chicken, native fish and a variety of other entrées. Rounding out the feast is a variety of salads, vegetables, steamed rice and chunks of farm-fresh pineapple. The following recipes, added to some of your family favorites, will help you make a special occasion into a luau of your own.

In Hawaiian, huli-huli means to turn over and over. This version of the roadside favorite uses a homemade huli-style sauce instead of the patented commercial version. This recipe requires advance preparation. (Huli sauce may also be used as a glaze for hamburgers and fish.)

Split the chicken down the backbone, removing backbone but leaving the halves attached at the breast.
In a medium mixing bowl, combine the soy sauce, pineapple juice, honey, brown sugar, garlic, ketchup, ginger, chile paste, salt and pepper.
Place the chicken in a large zippered storage bag and marinate, refrigerated, at least 4 hours. 4) Roast the chicken over medium-high direct heat, turning and marinating often, for about 1 hour or to an internal thigh temperature of 175° F.
Yield: 4 servings
Heat Scale: Medium

The Japanese brought teriyaki to Hawaii when they came to work in the pineapple fields, but it was Hawaiian cooks who added ginger and garlic and created a marinade from the glazing liquid.

Rinse the chicken and pat it dry; sprinkle it all over with salt and pepper then brush it with teriyaki marinade. Grill the chicken over indirect heat, basting every 15 to 20 minutes, for 1 hour or until a meat thermometer in the thigh registers 175° F. Allow the chicken to rest 10 minutes before slicing.

Alternately, use chicken breasts instead of whole chicken. Indirectly cook for 30 to 40 minutes until tender or grill over medium-hot coals 15 to 25 minutes, turning occasionally.)
Yield: About 4 servings
Heat Scale: Mild

This marinade works well for beef, chicken or pork. It may also be used as a dipping sauce. (If desired, pineapple juice could be substituted for the sake.)

In a mixing bowl, combine the soy sauce, sake, sesame oil and rice vinegar. Stir in the sugar and whisk until the sugar dissolves. Add the garlic, ginger, wasabi powder and green onion; stir to combine.
Yield: About  2 cups
Heat Scale: Medium 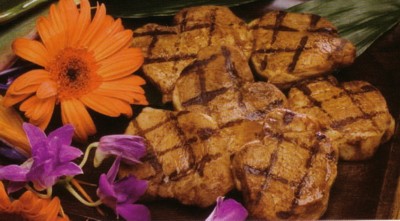 Cut the pork into slices about 1/4-inch thick and place them in a zippered storage bag.

Drain the pineapple, reserving all of the syrup. In a bowl, combine the syrup, teriyaki sauce, green onions, ginger and garlic powder; pour half of the marinade over the pork, reserving the rest. Cover and refrigerate the pork at least 1 hour.

Meanwhile, prepare the grill for medium-high direct cooking. Remove the pork from the marinade and grill about 5 inches from hot coals for about 5 minutes on each side or until completely cooked.

Pour the pineapple and remaining marinade into a saucepan. Bring it to a boil and serve as a dipping sauce.
Yield: 4 servings
Heat Scale: Mild

Partially freeze the steak to make slicing easier. Cut the meat, across the grain, into slices 1/8-inch thick. Place the slices in a zippered storage bag and add 1/2 cup of marinade. Seal and refrigerate for several hours or overnight.
Remove the meat from the marinade and drain. Prepare the grill for medium-high direct cooking. Brush the steak strips with marinade and grill, 2 to 3 inches from heat, for 1 minute. Turn and cook 1 minute longer. Serve with reserved warmed marinade.
Yield: 4 servings
Heat Scale: Mild

Kalua means to wrap food in leaves and steam over hot rocks, but this luau-style pork recipe doesn’t require a whole hog or a big hole in the ground, just your smoker. Look for banana leaves in the frozen foods section of your Asian market.

With a sharp knife, make several shallow long cuts along the roast. Brush the meat with liquid smoke and rub it all over with salt. Wrap the meat (like a birthday present) with the banana leaf and tie it securely with butcher’s twine. Cover the package with aluminum foil and refrigerate at least 4 hours or overnight.

Prepare your smoker for 220° F. cooking.

Place a water pan under the cooking grate and fill it with boiling water. Remove the foil and place the wrapped butt over the drip pan. Smoke the pork for 6 to 8 hours. Remove the leaves, shred the pork and serve.
Yield: 4 to 5 servings
Heat Scale: Mild

No one really knows why macaroni salad became a staple of the Hawaiian plate lunch and luaus; some say it came from the plantation workers, while others give credit to the Portuguese fishermen who worked the whaling boats from the Islands. For whatever reason, it’s as common as rice. As with any salad, there are a lot of variations. Feel free to add peas, tuna or Spam!

Cook the macaroni according to the package directions, drain in a colander and cool.

Lomi-Lomi salmon is a ceviche-style salsa. In the Hawaiian language, lomi-lomi means “to massage” which is exactly what you do preparing this recipe. Salted salmon was brought to Hawaii from the Pacific Northwest when sailors traded the cured salmon for fresh fruit.

Place a layer of salt into a glass baking dish, top with salmon and cover with more salt. Rub the salt into the salmon, cover with plastic wrap and refrigerate overnight.

Rinse the salmon under running cold water and pat dry.

Shred the salmon into a mixing bowl. Add the tomatoes, sweet onion and green onions. Add the lime juice and sugar; season with black pepper. Cover and chill for 1 hour before serving.
Yield: 3 to 4 Servings
Heat Scale: Mild

Traditionally prepared by pouring boiling water over shredded coconut to make coconut milk, using canned coconut milk (not cream) makes this recipe easier for mainlanders. If a thicker pudding is desired, increase the amount of cornstarch (up to 3 more tablespoons).

In a saucepan over medium-low heat, heat all but 1/4 cup of the coconut milk. Add the sugar, salt and vanilla. Mix the remaining coconut milk with cornstarch and gradually add to the pan, stirring until mixture comes to a boil and thickens. Pour the mixture into a square cake pan and chill until firm.