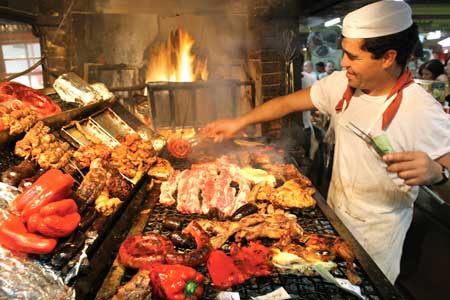 I think I found Asado Heaven. You see, in Uruguay asado means barbecue, so here I discovered the most incredible assemblage of asado eateries in the galaxy. And I found it in perhaps the most unlikely spot you can imagine: an old railroad station turned into a collection of 13 barbecue restaurants in Montevideo, Uruguay.
Welcome to the “Sitio Historico Gastronomia, Galleria de Arte et Artisanias” in the Mercado del Porto. As I said, it’s the most incredible barbecue venue on earth. The Mercado is a huge building that once housed a train station in the old port area of Montevideo that has been turned into a barbecue wonderland. Belching railroad engines and steam trains have morphed into belching barbecue grills.

Walking into the huge hall is a culinary & visual shock, one that visitors will never forget. There are blazing barbecues (parrillas) in every direction, dozens of them. Flames crackle and fragrant smoke wafts up into the tallest parts of the building, while the air is filled with the moans of diners tearing into seared meats.

The main hall of this entire building, with a ceiling that soars 30-40 feet high, is entirely filled by 15 asado restaurants, all with flames shooting up from the grills, every inch of which are covered with grilling meat punctuated by an occasional red pepper, whole onion, or thick slice of grilled cheese.

Visitors are awed by the dozens of asadores (BBQ chefs) covering their slanted grills with just about every part of the cow (or pig) that you can imagine. The searing steaks, roasting ribs, and charring chops sending off sizzling sounds and scented smoke lure you in like a siren on a Norwegian rock. 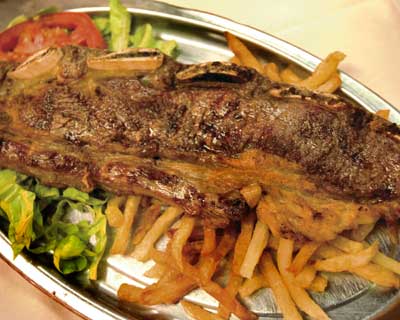 A plate of perfectly-cooked asado.

There were whole lambs, suckling pigs, half chickens, and the aforementioned beef in more configurations than you’ve ever imagined. I think at one stand I could have assembled a whole cow just from what was cooking on the asado.

As you walk through the crowded aisles you hear “The best asado in Montevideo!” from a dark-eyed beauty, while next door, a neatly-dressed young man offers up “Bife ancho bovino con crocantes de ajo” (beef rib-eye steaks with garlic crispies), while in the next stand a chunky chef smiles as he wraps chicken breasts in membranous caul fat.

For those with a sense of smell, this place is nothing short of intoxicating. For those who love sounds, the clinking of glassware in toasts, orders being given to the cooks (in Spanish, of course), and groups of roaming singers and guitar players break through the noisy conversations at crowded tables, hundreds of crowded tables. It is good to be eating at the Mercado.

Vegetarians should probably go to another place; there is naught much for them to munch on. Sure, some grilled tomatoes, potatoes, peppers, and onions fill out the vegetative roster, but it’s raw meat, sizzling meat, seared meat, charred meat, roasted meat, smoked meat, meat being torn apart by forks and fingers and teeth, and the sight, sound and scent of lovely red hunks of meat being moved from hot parts of the grill to cooler parts: that is the scene here. 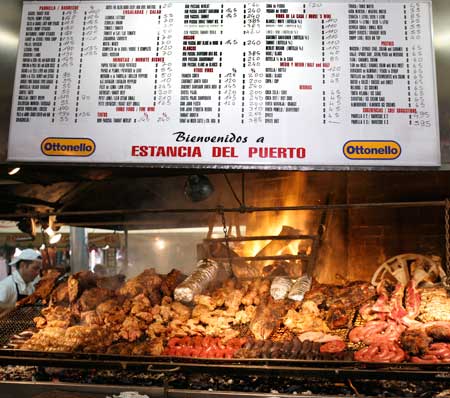 Since you can purchase leather purses, jackets, vests, shoes, and belts outside in the market square, you could spend an afternoon and almost re-assemble Bossy if you wished. Not to forget the other four-legged beasts that folks dine on, there are other restaurants inside the building that offer up a dozen cuts of lamb, almost as many of pork, and a few permutations of that good old standby, chicken. 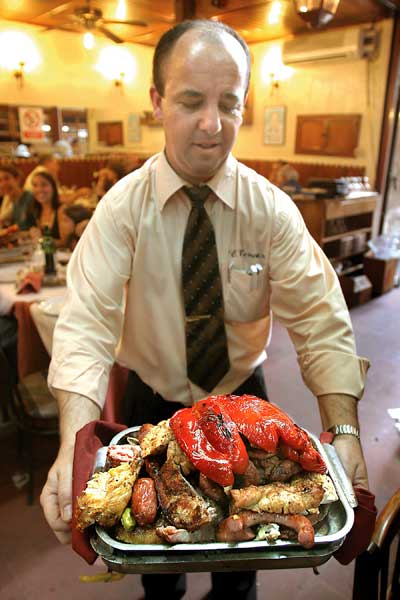 Oh yes, I forgot to mention that they really like wine…in the Mercado, in Montevideo, in Uruguay, and in South America. You’ll find mostly red wines like malbec and tannat, but also cabernet, merlot, and (to a lesser degree) sauvignon blanc and chardonnay. In fact, every time we ate lunch or dinner in a restaurant, 90-95% of all the tables had an open bottle of red wine in the midst of trays piled with meat. One eatery lists 30 wines and 5 beer varieties to quench your meat-eating thirst.

Asado chefs cook their meat very simply, without much enhancement other than a dab of olive oil and a touch spice to accent the organic, natural flavors of their beef, lamb, and pork. The spice: a sprinkling of coarse salt. That’s it. No rubs, brines, marinades, or barbecue sauces to spoil the pure taste of their chemical-free and superb beef.

The asados do offer up (on the side only) chimichurri sauce, which is a light mix of olive oil, garlic, vinegar, bay leaf, oregano, and pepper, and a salsa-like criolla sauce made from chopped red and green peppers, onions, tomatoes, parsley, and salt.  But the only thing we, and other diners we watched, contributed to the meal were grunts and contended moans.

For someone who loves barbecue, and has sampled it in 35 of the 50 states, and in more than 25 countries worldwide, this has to be the best assemblage of barbecue restaurants, chefs, and grills anywhere. You could eat here for months and never try the same food, and never make it through all the parts of a cow.

But the week I was in Montevideo and my many visits to the Mercado resulted in, I think, at least half a cow less on the plains of Uruguay. 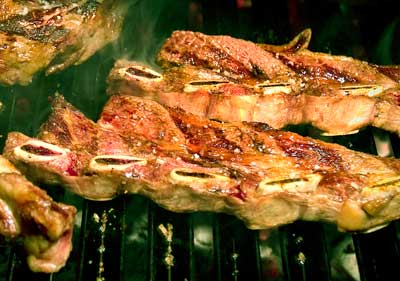 To get South American style beef ribs have the butcher cut through the bone and produce strips of ribs. So you’ll have a long strip of: meat, then a piece of bone, then meat, then bone, and so on and so forth. There’s no marinade except olive oil, a few spices, and salt and pepper—this is because you’re meant to serve your meat with Chimmichurri sauce.

Preheat a charcoal or gas grill to 300 degrees F.

For the rub, in a small bowl, combine the pepper, brown sugar, paprika, garlic powder, and salt and mix well.

Rub the ribs with the spice mixture and transfer them to a covered roasting pan or Dutch oven. Pour beer around the beef (not over it), cover the pan, and cook over direct heat on the barbecue for 3 hours.

Remove the ribs from the pan and cut into individual portions. Transfer the ribs back to the grill, close the grill cover, and cook for 5 minutes longer, or until they are crusty and tender. Serve with chimichurri sauce.

This light, olive oil-based sauce is all you’ll need to adorn that perfectly seared chunk of asado.

In a food processor, process the garlic and onion until well mixed. With the motor running, add the parsley, lemon juice, red pepper flakes, and cayenne. Add the olive oil, pouring in a slow, steady stream. Continue to process the mixture until it is smooth and quite thick, about 5 minutes. Use a rubber spatula to scrape the sauce into a bowl, add the salt and pepper, cover, and set aside. 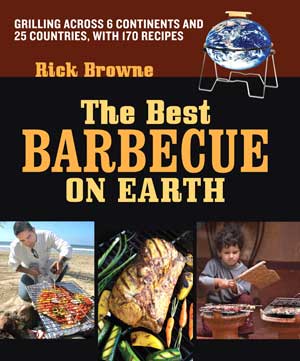 The two following recipes are from my book The Best Barbecue on Earth: Grilling Across 6 Continents and 25 Countries, with 170 Recipes TenSpeed Press, 2009. Available from Amazon.com 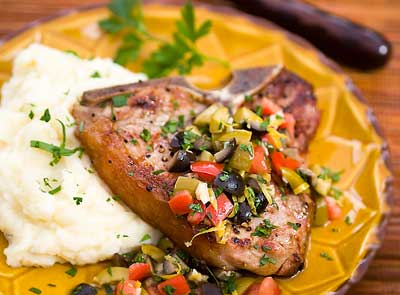 Look for veal with a fine grain and creamy pink color, any fat covering should be milky white. At the market, packages should be securely wrapped with no signs of leakage, and should be cold to the touch, without any tears or punctures.

In a large bowl, combine the green and black olives, tomato, garlic, lemon juice, parsley, and 2 tablespoons of the oil. Mix well and set aside.

Transfer the veal steaks to a large piece of aluminum foil, setting them side by side. Using your fingers, rub the remaining 2 tablespoons of oil into the steaks on both sides and season generously with salt and pepper. Wrap the foil around the steaks and let stand to marinate for 1 hour at room temperature.

Preheat a charcoal or gas grill to 400 degrees F. Make sure the grill rack is clean and oil it thoroughly with nonstick cooking spray.

To serve, top each steak with 1 to 2 tablespoons of the olive sauce and garnish with chopped parsley. 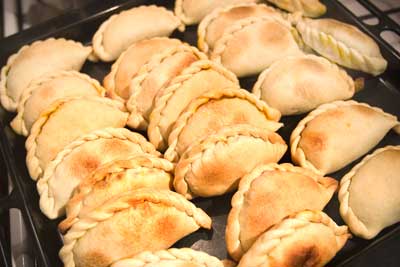 Empanada is a stuffed bread or pastry made by folding a dough or bread patty around the stuffing. In Spain, empanadas are usually large and circular in size and are cut into smaller portions for consumption, whereas in South America empanadas are normally small and semi-circular.

To make the crust, sift together the flour, baking powder, and salt in a large bowl; add 2 tablespoons of the lard and crumble between your fingers to combine. In a small bowl, beat the egg, add the milk, and add both to the flour mixture. Mix with a wooden spoon until the dough forms a ball. Divide the dough into 8 parts, form the parts into balls, and roll the balls out on a floured surface into 3- to 4-inch circles, each about 1/8 inch thick. Set aside.

To make the filling, combine the onions and ground beef in a large bowl and set aside. In a saucepan, heat the remaining 3 tablespoons lard, paprika, and red pepper flakes, stirring constantly, until well mixed. Let stand a minute, then pour the lard over the meat mixture. Add the cumin, season with salt and pepper and stir to combine. Let cool completely.

Prepare a charcoal or gas grill for indirect grilling and preheat to 400 degrees F.

To form the empanadas, place 1 heaping tablespoon of filling onto each dough round; divide evenly and add to each round the hard-boiled egg, raisins, and olives.

Wet the edges of the dough with cold water. Fold each round in half over the filling, sealing with the tines of a fork; brush with milk.

Transfer the pastries to a sheet pan, place on the barbecue over indirect heat for 20 minutes, turning several times so the pastry doesn’t burn, until the empanadas are just turning brown on the edges. Remove from barbecue and serve.

Serves 4 to 6 as an appetizer