That’s me at left, ready to mount the camel
for the ride up to the Red Fort

Mary Jane and I were about to leave for the cooking demonstration when the roof caved in–or sounded like it was about to. The noise was like a combination of thunder and a herd of water buffaloes, and room fifteen at the Shikarbadi Hunting Lodge seemed to shake as if we were suddenly in the epicenter of an aerial earthquake.

“Get the gun,” I yelled, imagining an invasion by scimitar-wielding bandits.

“We didn’t rent one,” Mary Jane reminded me. Amazingly enough, back in 1996, rifles were available for rent at the front desk.

There was only one thing to do–confront the situation directly. My heart was pounding as I wrenched open the door, ran down the steps of the porch and into the trees. The noise was still deafening. I turned around, looked up to the roof and saw them staring back at me: a troop of langur monkeys jumping up and down on the tile roof and having a hell of a good time. 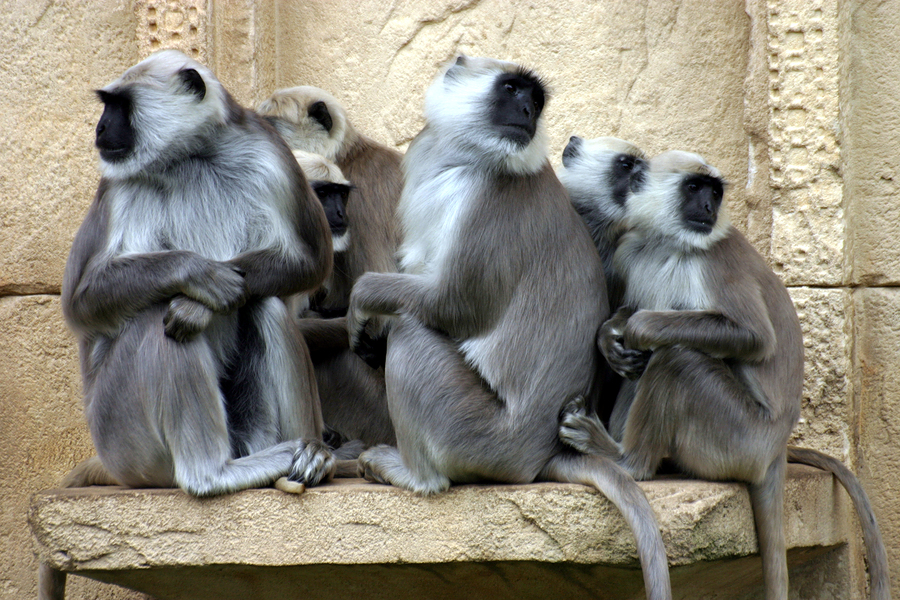 The troop of langur monkeys

As Mary Jane and I watched, laughing, one of the security guards came over and attempted to drive the troop away by throwing rocks at them. He finally managed to get them off the roof and into the trees, so, still laughing, we crossed the lawn beside the small lake and joined Pat and Dominique Chapman and the rest of our culinary tour group.

We were nearing the end of our two-week culinary tour of India, a 900-mile bus journey that had taken us from New Delhi to Agra, Jaipur, Jodhpur, and finally to Udaipur. After today, we would fly on to Bombay and from there back to London. Pat, our tour leader and England’s “King of Curries,” had booked us into the Shikarbadi because of its rustic beauty and its setting in the bush country outside of Udaipur. While walking to the cooking demo, we saw a wild boar drinking at the edge of the lake.

Chef Chattar Singh led a spirited demonstration of Indian snacks, including poori, pakoras, samosas, bundi, and paneer. Bundi is a simple fried bread made with chickpea flour and ground lovage seeds (lovage is also known as Italian parsley–substitute celery seeds) while pakoras are deep-fried vegetables that are first coated in a batter of chickpea flour, red chile powder, and turmeric. My favorite pakoras were made of the green chile strips, the onion, and the eggplants.  The samosas were the familiar fried, triangular turnovers, while bundi looks a bit like vermicelli but is really a batter that’s passed through a colander and into hot oil for deep-frying. The Indian “cottage” cheese known as paneer is an acquired taste, but it’s a fascinating process to make it.

Water buffalo or whole cow’s milk is boiled, then vinegar or lemon juice is added, instantly curdling it. The heat is turned off and the curdled milk is transferred to a fine cloth, which is  hung outdoors to drip. After only thirty minutes, the cheese is ready to eat.

Next up for the demo was one of our fellow members of the tour, San Jay Anand, who owns Madhu’s Brilliant Restaurant in Middlesex, England. He gave a spirited demonstration of the incredibly simple–and amazingly tasty–Jeera Chicken, which contains only chicken, salt, black pepper, cumin, and butter. He told us it was his father’s favorite recipe.

Another simple yet wonderful fast food was prepared for us at the Rajasthan Painting Development School, where we were buying some fine paintings on camel bone. Pat and one of the directors there fixed Jungli Mans, one of the most basic chile pepper dishes in the world. All it took was a pot and a small gas burner to make it. They served it to us with no accompaniment except for a bottle of Super Strong Beer, with 8.7 percent alcohol. “Strong chiles call for strong beer,” the director told us.

Later that night we sat by the lake sipping nightcaps and listening to the sounds of the countryside. We had learned at dinner that the monkeys were part of the show at the Shikarbadi, as the chefs fed them leftovers and turned them into Indian food aficionados. But they were asleep now, as we soon were with the full moonlight streaming over the lake and into room fifteen. 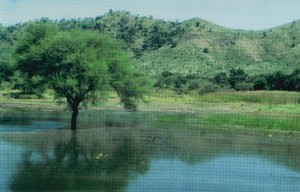 View Through the Screen of Room 15 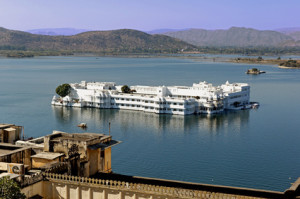 We also stayed at the Lake Palace in Udaipur, where the James Bond movie “Octopussy” was filmed.

These are some of the easiest Indian snacks to make. You can use any vegetable you like, but we recommend the softer vegetables such as peppers, eggplant, onions, and thinly sliced potatoes.

In a bowl, combine the gram flour, chile powder, salt, turmeric, and baking powder and mix well.  Add water and mix well until the batter has a creamy consistency. Heat the oil in a deep pan until
water splatters when sprinkled on it. Dip the vegetables in the batter, drop them in the oil a few at a time, and cook them until they are golden brown.
Yield: 6 servings
Heat Scale: Mild 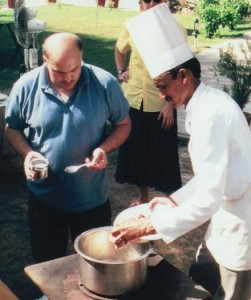 A high heat source is essential for this dish. It was cooked for us outdoors over a large gas flame, and consequently took only a few minutes to prepare. It is usually served over plain white rice. San Jay says this chicken tastes better if the bones are left in. He also says that chileheads are permitted to add red chile powder.

In a large pot, heat the water to boiling, then add the butter. When the butter is melted and well mixed with the water, add the chicken and salt. Stir for 2 to 3 minutes over high heat. Then add the ground cumin, whole cumin, black pepper, and red chile, if using, and continue stirring and cooking for about 20to 25 minutes over high heat. The sauce needs to be almost a paste, and the chicken is usually done when the butter returns to the top of the paste. Cut a piece of chicken open to make sure all the pink is gone from the meat.
Yield: 8 servings
Heat Scale: Varies

In the Mewari language of Rajasthan, jungli mans refers to a dish that would be prepared by a stranded hunter who only had the basics with him. It is amazingly tasty considering the limited ingredients. It is also quite hot, so serve it with some plain white rice.

In a pot, heat the ghee or oil and add the meat, stirring constantly for 10 minutes. Add the whole chiles and salt and continue cooking. Add water as necessary to make sure that the meat neither fries nor boils, but is essentially braised. Continue cooking until the meat is tender, about an hour more, stirring occasionally. Remove the chiles before serving.
Yield:  4 to 6 servings
Heat Scale: Hot

Paris in India in London Curry-Making [Made Complicated]

Paris in India in London Curry-Making [Made Complicated]