Compiled, and with Notes, by Dave DeWitt

Most people believe that barbecue originated in America relatively recently in the history of food.  Nothing could be further from the truth, as we can observe in the print above from medieval Italy.  If that isn’t barbecue in its purest form, than I just don’t know what barbecue is but meat cooked over fire and smoke.  And take the first recipe below.  It’s not from early America, but from Surrey, England, in 1732.  It’s certainly true that barbecue became extremely popular in this country, but take a look at this postcard from Tijuana in the 1920s:

Now, see if you can use the following historical recipes to prepare your own versions of BBQ history.

TAKE an Hog of five or fix Months old, kill it, and take out the Inwards, so that the Hog is clear of the Harslet [heart and liver]; then turn the Hog upon its Back, and from three Inches below the place where it was stuck, to kill it, cut the Belly in a strait Line down to the Bottom, near the joining of the Gammons, but not so far, but that the whole Body of the Hog may hold any Liquor we would put into it.

Then stretch out the Ribs, and open the Belly, as wide as may be; then strew into it what Pepper and Salt you please.

After this, take a large Grid-Iron, with two or three Ribs in it, and set it upon a stand of Iron, about three Foot and a half high, and upon that, lay your Hog, open’d as above, with the Belly-side downwards, and with a good clear Fire of Charcoal under it. Broil that side till it is enough, flouring the Back at the same time often. Memorandum, This should be done in a Yard, or Garden, with a Covering like a Tent over it.

When the Belly-part of the Hog is enough and turned upwards, and well fix’d to be steady upon the Grid-Iron, or Barbacue, pour into the Belly of the Hog, three or four Quarts of Water, and half as much White-Wine, and as much Salt as you will, with some Sage cut small, adding the Peels of six or eight Lemons, and an Ounce of fresh Cloves whole.

Then let it broil till it is enough, which will be, from the beginning to the end, about seven or eight Hours.; and when you serve it, pour out the Sauce, and lay it in a Dish, with the Back upwards. Memorandum, The Skin must not be cut before you lay it on the Gridiron, to keep in the Gravey ; neither should any of the Skin be cut, when you have any Pork roasted for the fame Reason.
From The Country Housewife, by Richard Bradley, 1732.

This is the name given in the southern states to a fat young hog, which, when the head and feet are taken off and it is cut into four quarters, will weigh six pounds per quarter.  Take a forequarter, make several incisions between the ribs, and stuff it with rich forcemeat; put it in a pan with a pint of water, two cloves of garlic, pepper, salt, and two gills of red wine, and two of mushroom ketchup, bake it, and thicken the gravy with butter and brown flour; it must be jointed, and the ribs cut across before it is cooked, or it cannot be carved well; lay it in the dish with the ribs uppermost; if it be not sufficiently brown, add a little burnt sugar to the gravy, garnish with balls.

From: The Virginia Housewife, by Mary Randolph. Plaskitt & Cugle, 1831.
Often in post-Colonial Virginia, for the sake of room and the safety of the main house from fire, meat was roasted or baked in an outdoor oven that resembled today’s home wood-burning pits.   For a large barbecue, pits were built or dug into the ground. Forcemeat is a mixture of meat or vegetables chopped and seasoned for use as a stuffing or garnish.  A gill is one-half cup.  Balls are eyeballs.  Mary Randolph, the best early cookbook author, was related to Thomas Jefferson by marriage. 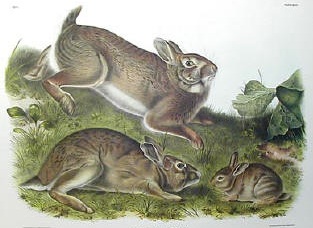 Clean and wash the rabbit, which must be plump and young, and having opened it all the way on the under side, lay it flat, with a small plate or saucer to keep it down, in salted water for half an hour. Wipe dry and broil whole, with the exception of the head, when you have gashed across the backbone in eight or ten places, that the heat may penetrate this, the thickest part. Your fire should be hot and clear, the rabbit turned often. When browned and tender, lay upon a very hot dish, pepper and salt and butter profusely, turning the rabbit over and over to soak up the melted butter. Cover and set in the oven for five minutes, and heat in a tin cup two tablespoonfuls of vinegar, seasoned with one of made mustard. Anoint the hot rabbit well with this, cover, and send to table garnished with crisped parsley.
The odor of this barbecue is most appetizing, and the taste not a whit inferior. Squirrels may be barbecued in the same manner.
From: Home Comforts: or, Things worth knowing in every household: being a digest of facts established by science, observation and practical experience, respecting the important art of living well and cheaply, preserving health and prolonging life, by Edwin Troxell Freedley.  Claxton, Remsen & Haffelfinger, 1879.

ROAST BEEF FOR THE MULTITUDE. How a Rig Ox Was Killed at a Barbecue

HERE were thousands of people at Apollo Garden, in Roxbury, at Father Cummins’s barbecue. Few of those who enjoyed a bit of roast beef there late in the day, may previously have had any idea of the process of roasting the beef. The ox used to-day came from Texas and was a gift from A. Shuman. It weighed fully fourteen hundred pounds when it was turned over to the Creole chef, Charles W. Allen of Lexington, Va. He and his wife know all that is to be known about conducting a barbecue, for they have had long experience in the South, and are in much demand in this part of the country, too.

The ox is first split in the brisket and is dressed much after the manner of dressing poultry. When roasted on the immense gridiron, as was done to-day, it is not stuffed with anything, but when roasted by being hung on a “spit,” a filling is used. The spit process, however, does not thoroughly cook the beef, and the result is not likely to be so satisfactory as when the gridiron is used. Mr. Allen started the roast at about four o’clock this morning, as fully twelve hours’ time will be required to get it to a proper condition for serving.

Before the beef is placed over the fire, a knife is thrust into it in a dozen or more places to the depth of ten or twelve inches. In the cavities thus made salt, pepper and other condiments are placed. The cook finds that this keeps all the rich juices in the meat and only fat drops out into the pan under the beef. Every now and then the meat is basted with a savory sauce. This sauce is made from the recipe of a famous old French cook, and the secret of its composition is carefully guarded by Mr. Allen. When the beef is carved the flavor of the juice is especially fine. The beef rests on ten two-inch iron pipes laid across a pit which is walled with stone much like a small cellar. Charcoal is used for fuel, for with this a steady slow fire can be kept going. A three-inch pipe runs through the length of the body of the ox and this pipe is fastened at each end to strong ropes which work on pulleys. By this means the great roast is raised to be turned over after one side has been against the fire for some hours. The cooking of the back also is done in this way, for by the ropes the ox can be placed in almost any position. It takes four men to raise it in this way, and they do it six or seven times during the process of cooking.
From: Boston Transcript.  Reprinted in The American Kitchen Magazine, Volume 6.  Home Science Pub. Co., 1897.

To barbecue is to roast an animal whole, and baste it frequently with a special dressing, for which the following recipe is borrowed from Frank Bates:
One pint of vinegar, half a can of tomatoes, two teaspoonfuls of red pepper (chopped pepper-pods are better), a teaspoonful of black pepper, same of salt, two tablespoonfuls of butter. Simmer together till it is completely amalgamated. Have a bit of clean cloth or sponge tied on the end of a stick, and keep the meat well basted with the dressing as long as it is on the fire.
From: Camp Cookery, by Horace Kephart. Outing Pub. Co., 1910.