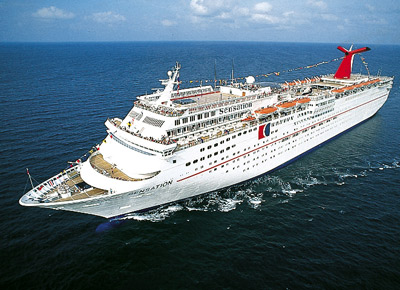 A Much-Needed Revisit to the Bahamas

It was quick but filling, my revisit to two of my favorite Bahamian islands, and it had only taken me 38 years! Oh well, too many hot and spicy places to visit around the world, and too little time.

In January, 2010, Mary Jane and I were on the third Spice of Life Cruise and Seminar at Sea, and there was some business aboard—namely, a State of the Fiery Foods Industry Seminar, but we also explored the culinary delights of the two islands.

First Day: Freeport with Lorenzo
The Reverend Lorenzo Walker, a veteran guide on Grand Bahama (the longest Bahamian island, 110 miles long and 17 miles wide), quickly knew what would get us going: beer. So our first stop was to visit the hopheads at the Bahamian Brewery and Beverages. I tried the Sands Beer (not named for the beach substance but rather for the owner,  Jimmy Sands).  My favorite of their brews was Strong Back Stout, which was as good as any stout I’ve ever tasted.

As if we couldn’t get enough alcohol, the next stop was a rum tasting at a very well-stocked liquor store, where flavored rums were featured I tried coconut rum, banana rum, and pineapple rum before choosing the incredible mango rum, the Ole Nassau brand, and of course I had to buy a bottle.

Food was next at the Fruit Vendors Market, where the Reverend Walker introduced us to Barbara Bush, the Conch Queen. Well, that’s what she calls herself, and her real name is Barbara Walker, and if she is a relative of Lorenzo’s, this was not explained to us. Conch was the food item of the day, and the National Food of the Bahamas, where the natives are called—just like in Key West, “Conchs.”  With raw conch fresh from the shell, Barbara made us Conch Salad, which is the Bahamas answer to ceviche.

More beers were on order at the Gullywash Club, famous for its outdoor Wednesday night fish fry and for its xxx-rated tropical cocktails.  I never imagined that someone would have the nerve to name a drink “Sperm Bank,” but the owner of the Gullywash did.  I asked him where he got the recipe names, and he confessed that he stole them from a book of 1001 drink recipes.  The Bahamians are renowned for their sense of humor, and I must admit that I spent most of that part of the cruise laughing.

Second Day: Nassau and Atlantis with the Linebacker Guide 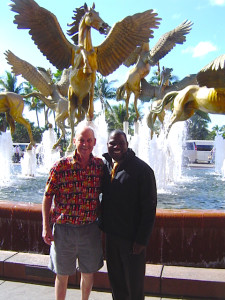 “Marvelous Marvin” Gibson is a fast-talking, warm-hearted Bahamian guide with a nearly photographic memory of his subject area, the island-city of Nassau, capital of the Bahamas.  Few people know that The Bahamas have the third-highest per capita income in North America (after the U.S. and Canada), but Marvin does.  As he drove us around in his new van, showing us government buildings, markets, and recommended restaurants, I sat next to him and soon discovered that he had played linebacker for a North Carolina college, had sold time-shares when he returned to Nassau, and then became an entrepreneur—a very capable independent guide.

Marvin took us to the amazing Atlantis resort, pointing out the Michael Jackson Suite, which rented for something like $25,000 per night.  I suggested renaming it the Late Michael Jackson Suite and he laughed.  The aquarium there, the second-largest single tank in the world, is stunning and one of the better ones we’ve visited.  The one in Sydney with the walk-though shark tunnel is still my favorite, though.

It was a whirlwind tour all right, but a fun one because Marvin and I were cracking jokes and laughing like crazy.  Here a few selected scenes. 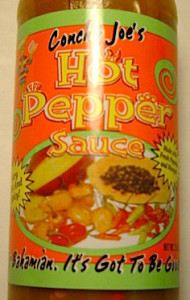 Finally, it was time for some food, so with some warm embraces all around, Marvelous Marvin dropped us off for some grouper sandwiches at one of his favorite seafood restaurants—what else?  You don’t want cheeseburgers in this paradise, especially after visiting the Atlantis Seafood Aquarium!  On my grouper sandwich I indulged in some Conchy Joe’s Hot Pepper Sauce, and had to buy a bottle of it because it was spiced up with goat peppers!

It’s not easy to find conch when you’re away from “de islands,” but thanks to the great folks at the Prawn Corporation of America, you can order your fresh conch by mailorder.  A little pricey, yes, but less expensive than a cruise!

The conch should be prepared by using two large bowls of salted water.
Wash the conch thoroughly in the first bowl.
Place it in the second bowl to soak for about 30 minutes, then drain.
Combine all ingredients in a medium mixing bowl and allow this mixture to marinate for 30 minutes to 1 hour in the refrigerator.  Serve cold on lettuce leaves.
Yield: 6 to 8 servings
Heat Scale: Hot 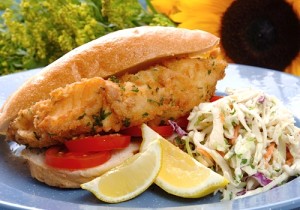 The grouper can either be fried or grilled, but since we were served fried grouper, try the recipe below.  Snapper can be substituted for the grouper but use a salt water fish for this recipe.

Combine the cornmeal, flour, paprika, and chile powder in a shallow bowl. Place the egg whites in another shallow bowl. Dip each fish fillet in cornmeal mixture, then in the egg whites, then again in cornmeal mixture.
Place the fillets on a plate; cover with plastic wrap and refrigerate 10 minutes.
Heat the oil in a large nonstick skillet. Add fillets and cook over medium-high heat, 2 to 3 minutes per side. Season them to taste with salt and pepper.
On the bottom half of each bun, spread tartar sauce to taste and top with one fillet. Divide the iceberg lettuce evenly between the four sandwiches, and top with coleslaw if desired. Add the hot sauce to taste, place the top of the bun onto the lettuce and slaw and serve.
Yield: 4 servings
Heat Scale: Varies

What’s Up With Goat Peppers?