By A. L. Salisbury

COMMERCE brings to cosmopolitan centres of demand sundry commodities, familiar and almost essential to the dietary of many persons, yet little used, or even known beyond certain limitations. 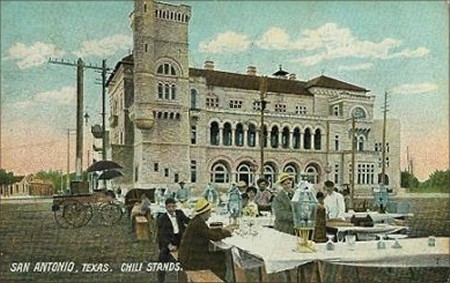 Such a class of merchandise includes a noted condiment that, as a favorite and valuable item in the culinary economy of several southern countries, is especially prized.

This is a powder produced by grinding the ripened and dried pericarp of a particular variety of sweet capsicum, or American red pepper. During the process of manufacture, the seeds possessing a considerable degree of pungency are cast out. The resultant product is characterized by a mild, agreeable flavor, pleasing aroma, brilliant crimson hue, and frequently by a rich, oily quality which seems to indicate the presence, in combination of some foreign element, such as olive oil.

This powder is of rare excellence as a medium for improving the color of many customary viands. Endowing them, in this way, with a more attractive appearance, it serves to heighten appreciation, and often to tempt fastidious appetite. In addition to this recommendation to favor as a desirable adjunct to the supplies of the household caterer, it is presumed, like other preparations of capsicum, to stimulate digestion, and counteract the effects of external heat; but if kept carelessly, or too long, it is very liable to deteriorate, and will sometimes mold.

In New Orleans it is displayed for sale usually by the importers, who keep it packed in cylindrical tin cases, containing about twenty-five pounds each. It is specified variously, as “Pimientos Dulces,” “Pimientos Molido,” “Piment Rouge,” “Spanish Sweet Pepper,” “Chili Pepper,” etc., according to the lingual usage of vendor and consumer. “Chili Colorado”[red chile] is an appropriate term used, also, to designate this product of a plant indigenous to America, though most extensively cultivated near the western coasts of the Mediterranean sea. And some dealers claim that from thence, only, can it be obtained. But this conclusion is probably an erroneous one.

The word chili is of Indian origin, but in Mexico is chiefly employed to signify the fruit of more piquant varieties of capsicum, especially that of the Tabasco pepper.  The short conical pods of the latter, produced in great profusion in the hot lowlands, which constitute the maritime district of southeastern Mexico, are remarkable for their fervid strength, and exquisite delicacy of flavor.  Tabasco pepper forms the principal ingredient of several sauces, and has been claimed as the leading element of the famous “Maunsel White,” once, by virtue of its well attested claims to gustatorial superiority, an eminent favorite in the dining-halls of Louisiana.

The Mexicans being extravagantly fond of hot chilies, use them lavishly in domestic cookery, and pay but little attention to the production of the milder sort; though it is probable that the two are sometimes combined in preparation of special articles of fare. Still, though little familiar to the Mexican palate, and by no means correspondent to the typical “chili” of Mexico, Upon the testimony of reputable dealers, it is nevertheless asserted, that limited quantities of the sweet chili pepper are received regularly from Mexico, and make a very creditable showing, in comparison with European importations. When the Mexican chili arrives, in the powdered form, it follows the ordinary channel of handling and distribution; but sometimes bales of ripe fruit flattened and dried, enter the New Orleans market, and the grinding is then performed by local enterprise; though this does not appear to be generally known.

The principal supply, as far as can be ascertained, comes from Spain, where centres of production are found in the provinces of Valencia, Murcia and Malaga. Alicante and Malaga being acknowledged as the main points of distribution. The marketplaces of Spain and those of Tunis and Tripoli, in northern Africa, are gay with the bright pods brought in from suburban gardens, and arranged in bunches of festoons, to court the attention of native buyers; and they always meet with ready and remunerative sales. In the dietary