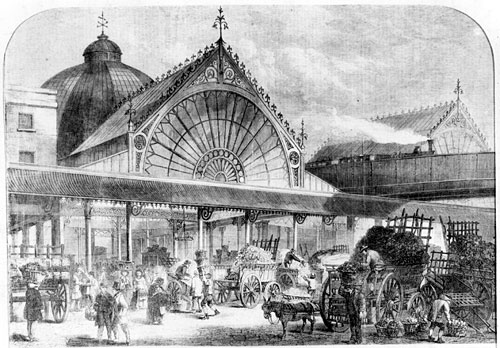 This seems to be one of the few historical worldwide surveys of chiles and their consumption globally. It is interesting for several reasons. First, it is the first debunking of the notion that chile seeds are hot that I have ever found; second, it reports on adulterated cayenne, a problem in India, England, and the U.S. for centuries; and third, it places chiles within the context of worldwide cuisines. It is from Tropical Agriculture: A Treatise on the Culture, Preparation, Commerce and Consumption of the Principal Products of the Vegetable Kingdom, by Peter Lund Simmonds. London: E. & F. N. Spon, 1889. –Dave DeWitt

The generic botanical name of Capsicum is derived from “kapto,” to bite, on account of the hot pungent qualities of the pericarp.

Among the principal species grown may be named the following: —The cherry pepper or round chilli (Capsicum cerasiforme, Willd.); the bonnet pepper (C. tetragonum, Mill.) ; the bell pepper (C. grossum, Lin.); the spice or goat pepper (C. frutescens, Lin.); and the bird pepper (C. baccatum, Lin., or C. fastigiatum). The last-named two are more acrimonious than the others. The fruits of these several species are of various forms—round, oblong, cordate or horned, and either scarlet or yellow; in some varieties they are so little pungent as to be used sliced in salad, in others they are intolerably biting till the mouth becomes accustomed to them by habit. The acrid resin (capsicine) in the fruit renders them hot, pungent and stimulating. Contrary to general opinion it has been found on analysis that the seeds after removal of the pericarp, and thoroughly washing and drying them, are entirely devoid of acridity and pungency.

Red pepper may be termed one of the most useful condiments in hygiene. As a stimulant and auxiliary in digestion it has been considered invaluable, especially in warm countries. There are always a few of these shrubby plants grown about the dwellings in the tropics to supply the daily wants of the table, as they are generally gathered and eaten just before fully ripe.

Unfortunately, in England, Cayenne pepper is very frequently adulterated, and hence reliance can only be placed on purchasing from respectable wholesale houses, which have a reputation and character for probity and the sale of genuine articles. Venetian red, red ochre and cinnabar are often added to darken the colour, although this is no sign of its excellence, for the Nepal and many other Cayenne peppers are extremely light-coloured, as they will naturally be if made with the ground seeds alone unmixed with the redder husks of the fruit capsule. As Cayenne pepper when obtained pure and used in moderation promotes digestion and so prevents flatulence, and is hence undoubtedly serviceable to persons of languid digestion, so if adulterated with poisonous substances it is calculated to be highly injurious.

The natives of Brazil consume great quantities of these peppers, preferring the small red ones, which are of excessive pungency. When they have no fish they boil several pounds of these peppers in a little water, and dip their mandioca bread into the fiery soup thus formed.

Chillies are largely used as a condiment, and also employed as a stimulant and carminative in medicine. There are two kinds common in India: the chilli, the fruit of C. fastigiatum. 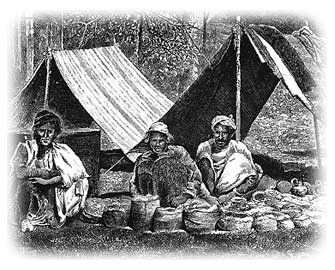 There is an enormous consumption of chillies in India, as both rich and poor daily use them, and they form an important ingredient in the curries and chutneys in general use, when ground into a paste between two stones, with a little mustard, lard, oil, ginger and salt, this forms the only seasoning which the millions of poor in the East can obtain to flavour their insipid rice.

To a native of India a meal is nothing unless it embraces a curry, and a pungent decoction, known as pepper-water, is freely consumed when a curry cannot be had. The Hindu, as a rule, likes his curry hot with pepper and cayenne, and rich with ghee (clarified butter), and if these conditions are met he is not overfastidious as to flavour. The Mahomedan, on the other hand, is a great connoisseur in condiments, and has expended much ingenuity in inventing curries, chutnies, pickles, and such like.Chillies or pod peppers are much used for flavouring pickles. By pouring hot vinegar upon the fruits all the essential qualities are procured, which cannot be effected by drying them, owing to their oleaginous properties; hence chilli vinegar is in repute as a flavouring substance. In Bengal the natives make an extract from the chillies, which is about the consistence and colour of treacle. A form of soluble Cayenne was sent from British Guiana in 1867 in the Colonial collection forwarded to the Paris Exhibition.

In Natal the capsicum plant grows in perfection, and yields a profit to a limited number of growers. The export of Cayenne pepper has averaged for ten years £600 per annum, exclusive of inland and local consumption. But the export has been declining for some years. The shipments of cayenne in 1880 were only 17,277 lbs., but in 1883 187 cwts., valued at £510.

In the West Indies the sorts grown are, frutescens, Lin. baccatum, chillies for Cayenne pepper; and annuum, Spanish pepper.

Monteiro says the chilli pepper is the universal condiment of the natives of Angola. It grows wild everywhere in Western Africa in the greatest luxuriance. It is eaten either freshly gathered or after being dried in the sun. It has a most violent hot taste, but the natives consume it in incredible quantities; their stews are generally of a bright red colour, from the quantity of the pepper added, previously ground on a hollow stone.