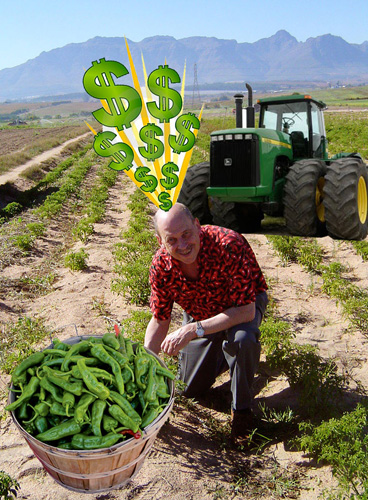 [Editor’s Note: This piece of satire was written in 1993, so some of the estimated costs may have changed.  Do you think they might have gone up?]

After a particularly good harvest, many of us amateur pepper gardeners yearn to go pro.  We dream of hitting the big leagues and making a fortune by growing and harvesting the pungent pods.  At the very least, we want to drive a big tractor. Our fantasies are fueled by “friends” who make inane comments like, “Dave, you’re a pepper expert!”  (Note how they always speak in italics.)  “You could get rich growing habaneros!”  (Or whatever variety is the currently fashionable pepper of choice.)

Severely deranged by such comments, I recently decided to write a Business Plan for a Chile Pepper Farm.  For readers who are not very knowledgeable about entrepreneurship, I should first point out that a Business Plan is Phase One of Starting a Business, Phase Two is Sending Press Releases to the Media, and Phase Three is Declaring Bankruptcy, but more about those important stages in another article.

Anyway, I began my Business Plan in a positive manner, by writing:  “Net profit = $__,__,__.__.”  But then I got stuck because I couldn’t think of the number of dollars to fill into the blank, or even how to figure out the figure.  So I showed my Business Plan to my friend Wayne, who gave me that special look he usually reserves only for people who ask him for spare change.

“You schmuck,” he said kindly (“schmuck” being the Urdu word for “bald old dreamer”).  “You can’t estimate the net profit of a venture until you know your costs, the risk factors involved, the selling price of the goods—”

“Don’t confuse me with technical terms,” I pleaded.  “Just tell me where to start.”

He gave me a shrug and said, “So why not ask some chile pepper growers, already?”

So I started my research by calling a noted chile pepper grower in the Mesilla Valley in New Mexico.  For reasons of security and possible libel suits, I’ll just call him “Joe.”  At first Joe was suspicious, apprehensive, and aloof.  But after I offered him a $50 an hour consultation fee, he became very helpful indeed.

“How many acres do you want to grow?” he asked.

“Where’s your land located?”  he quizzed me.

“Just a hundred an acre per season,” Joe said, but he was probably thinking “Hey, rube!” because I used my computer-like brain to calculate that my expenses started at $10,000 just to lease the land.

“Then you’ll need some seed,” he suggested.

I could hear the sound of a calculator in the background as Joe said, “You’ll need five to ten pounds per acre—figure an average of eight pounds per acre at $25 a pound, times a hundred acres—”

“That’s not too much,” I ventured.

“Of course, you have all the equipment.”

I didn’t want to show my ignorance but I had no option.  “What equipment?”

“I’d let you lease mine, but it’s all tied up in onions.”

“I’ve always wanted to drive one of those,” I admitted.

“Oh, about fifty to eighty grand, depending on options.”

“Can I convert my Volvo?”

Joe chuckled.  “Along with your new tractor, you’ll also need a laser plane system with scraper and electronics, that’s about thirty grand if you buy a used one.  You’ll need a plow and a twelve-foot offset disker, together they’re about thirteen thousand.  Oh, and don’t forget that four-row cultivator for about three grand.”

“I’d never forget something as important as that,” I promised.  “Does it plant my seeds for me?”

“Not true,” I bristled.  “I’ve had highly successful pepper gardens for over ten years.  I’ve grown over thirty different varieties—”

Joe guffawed.  “Do you know about laser leveling?”

Joe dissolved in hysterical laughter, then recovered briefly.  “To insure proper drainage, you’ll probably need a four-inch drop per acre.  And surely you know about capping the seeds—”

“Huh?” I could barely understand him as he explained between outbreaks of hysterics.

“You have to plant the seeds a foot deep in the bed to protect them from the cold—that’s the cap.  Then, after irrigating, precisely when the seeds are germinating, you have to scrape off that cap of dirt to within one-half inch of the seeds.  If you miscalculate, you’ll either leave the seeds too deep to sprout or scrape the seeds out of the bed and ruin your whole crop.  Removing the cap at exactly the right time separates the men from the boys.

I tried to regroup.  “Let’s not talk about the negative side of it,” I pleaded.  “Suppose I do everything right.  How much money can I make?  What’s the bottom line?”

By now Joe had controlled his laughter to a mere chortle.  “If you’re lucky, you can gross about one and a half dry equivalent tons per acre worth about $1700.”

“Less up-front expenses,” he pointed out.

“You forgot fertilizer, labor, and harvesting costs,” said Joe in a mocking tone.

“Arrrggghhh!” I screamed.  “Why would anyone want to grow peppers?”

“It’s a crop shoot,” Joe admitted.  “But if you know what you’re doing and stick with it, you can eke out a living– assuming, of course, you don’t lose your entire crop to the virus.”

“Virus?” I mumbled, barely coherent by now.  “Look Joe, I’ll, uh get back to you.”  Then I gently replaced the receiver and gave thanks to every god listed in The Encyclopedia of World Religions that I was only assembling a business plan and not actually starting a pepper farm.

So, after all this research, I’ve now learned how to handle those friends who are so certain I’ll be rolling in bucks by growing a hundred acres of habaneros.  “I’ve got the plan, the land, and the seeds,” I tell them.  “Have you got two hundred grand?”

It never fails.  They back away, mumbling something about all their reserve equity being tied up in non-fluid debenture bonds and besides, even if they could sell short and release the funds, the computer that writes the checks just crashed its hard drive and they’ll have to write the check by hand and send it from New York, which could take months.