With the green chile harvest in full swing in the southern part of the state, it’s time to take a look at how chile peppers have influenced the cuisine of the Duke City.
Even before Fabian Garcia, a researcher at what is now New Mexico State University, began to standardize New Mexican chile peppers in 1901, the fiery pods were dominant in the cuisine of the Duke City.
In 1846, William Emory, Chief Engineer of the Army’s Topographic Unit, was surveying the New Mexico landscape and reporting on its customs. He described a meal eaten by people in Bernalillo, just north of Albuquerque: “Roast chicken, stuffed with onions; then mutton, boiled with onions; then followed various other dishes, all dressed with the everlasting onion; and the whole terminated by chile, the glory of New Mexico.” Emory went on to relate his experience with chiles: “Chile the Mexicans consider the chef-d’oeuvre of the cuisine, and seem really to revel in it; but the first mouthful brought the tears trickling down my cheeks, very much to the amusement of the spectators with their leather-lined throats. It was red pepper, stuffed with minced meat. 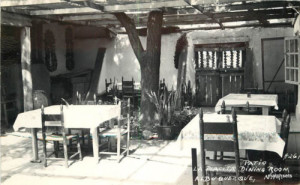 During the Indian wars and Civil War in New Mexico, Albuquerque was a principal supply center for the forts being built all over the Southwest, and warehousing became an important business. In early to mid-1800s, the area around Albuquerque was the largest sheep-growing district in the state, which meant that mutton was a large part of the diet. Subsistence farming was common on small parcels of land in the north and south valleys and extra fruit and vegetables were peddled to the nearby pueblos. There was a cattle boom after the Civil War and particularly during the 1880s, and beef replaced mutton as the most common meat served in Albuquerque.
In her 1947 book, Albuquerque, Erna Fergusson discussed the long tradition of New Mexican cooking, which stretched back to the early days of the settlement of the town. “The larder was limited. Beef, mutton, pork and fowl were varied by game and dried buffalo meat from the plains. Vegetables grew but were used in sauces and gravies rather than alone. Fruit was eaten fresh in its short season, and dried on wide trays for storing. Corn was used in every way, from soup to desserts, and the lowly brown bean appeared at every meal. Chile grew in every man’s garden and was the only condiment. A limited diet, but good cooks invented many a savory combination and the modern epicure rates—New Mexican cookery—when properly done—with the best.” 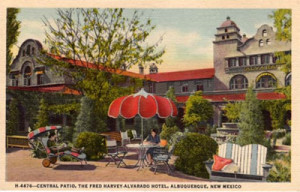 After the railroads arrived in New Mexico and the film industry discovered us, the hot spot in town soon became the Alvarado Hotel. This magnificent structure, which opened in 1902 at a cost of $200,000 (huge in its time), was considered to be the “finest railroad hotel on earth” and was hotel magnate Fred Harvey’s finest lodging creation. Located along the railroad tracks facing First Street, the Alvarado featured eighty-eight guest rooms, a gigantic dining room, Spanish-tiled roofs, many patios with cascading fountains, and beautiful “Harvey Girls,” who were the hostesses and served “all you could eat” for one dollar.
Many celebrities stayed at the Alvarado Hotel in Albuquerque: Rudolph Valentino, Albert Einstein, Charles Lindbergh, Joan Crawford, Katherine Hepburn, and Jack Benny, to name just a few. U.S. Presidents selecting the Alvarado included William H. Taft (who reputedly got stuck in the bathtub), Herbert Hoover, Woodrow Wilson, Franklin D. Roosevelt, and Theodore Roosevelt. 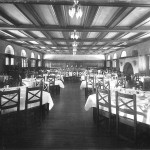 The Alvarado fell on hard times when serious competition, like the first-ever Hilton, now the Andaluz—opened up. Eventually, the hotel was abandoned and despite efforts to preserve it, the classic structure could not be saved and one of Albuquerque’s architectural masterpieces—as well as a significant part of the city’s food history—was torn down in 1970. But the classic recipes linger on. 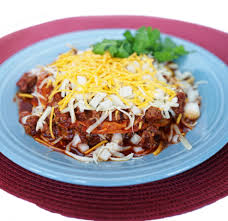 This is the classic enchilada dish served at the early 1960s Albuquerque restaurant, Videz, owned by Pete Benavidez. The restaurant was torn down to make way for Interstate 40, but the recipe lives on.

In a large pot, cover the chiles with very hot water and soak for 20 to 30 minutes or until limp and partially rehydrated. Place the chiles in the blender (they should loosely fill 3/4 of the container, if more, make two small batches.) Fill the container up near the top with water. Drop in the clove of garlic and sprinkle the top with the oregano. Add a little salt at this stage if you wish. Blend for 2 to 3 minutes on high or until a homogeneous or orangish-red mixture is obtained.
Pour the mixture into a saucepan and add the pork. Cook, covered over a very low heat or uncovered at a slight bubble, for 2 to 3 hours. If cooked uncovered, periodically add water back to original level to maintain proper consistency which I can only describe as medium soupy.
Remove the pork pieces and save for another meal such as carne adovada. Place the chile sauce in the refrigerator and cool. Remove any fat that congeals on the top.
Season the beef with a little salt and pepper and saute until the meat is no longer pink.
Combine the sauce and beef and simmer, covered, for an additional 30 to 45 minutes.
Fry three tortillas per person in a couple of inches of oil until they are slightly harder that the taco shells. As they are removed from the oil with tongs, dip each into the red chile pot until they are fully submerged. Remove, place on a plate and top with some cheese and onion. Continue the process until the tortillas are stacked three high on each plate.
Ladle red chile, including a small amount of the meat, over the tortilla stack until it is puddled up as deep as it will stand around the base of the stack. Cover the enchilada lightly with grated cheese and place in a 250 degree oven for 20 minutes. Serve garnished with chopped onions.
Heat Scale: Medium

Thanks to Pete Benavidez, Dick Beeson, and Nancy Gerlach