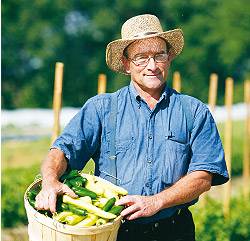 When most fiery food and pepper aficionados think of the hottest places to find habaneros, jalapeños, and other spicy favorites, any number of cities in the American Southwest might come to mind. Chances are the small Pennsylvania Dutch borough of Kutztown, PA wouldn’t even make the Top 100. Possibly not even the Top 500. But one prosperous farmer has put his operation on the map thanks to his constantly-expanding inventory of chile pepper and heirloom tomato varieties that draw customers from several states.

James Weaver, owner and proprietor of Meadow View Farm in the heart of Pennsylvania Dutch country, is quite traditional in many ways. He and his family are devout Mennonites, and put their strong work ethic to good use by running their successful farm, which has been in the family for generations. They operate a greenhouse and farm stand on their property. And every fall, they host Chile Pepper and Tomato Field Excursions that bring thousands of visitors to their farm. It was fitting that I visited Mr. Weaver at his farm on a day when the thermometer was inching toward 100 degrees—a perfect day to find out what’s so hot about these hot peppers. 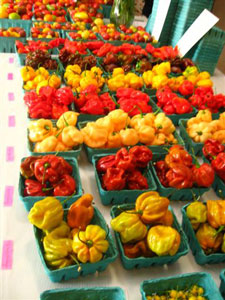 farm—strawberries, cucumbers, lima beans, and 70 types of pumpkins, gourds, and squash. He also regularly grows over 100 varieties of heirloom tomatoes.  Weaver has never been afraid to try growing something new and was up for a challenge, according to his friend Chris Markey, co-founded of the Chile Pepper Food Festival in nearby Bowers. “I had a business and sold herbs and herbal gourmet vinegars, and I was looking for someone to grow herbs locally for me,” Markey says. He met Weaver and the two men struck up a conversation about herbs, which led to a friendship that has lasted well over 20 years. Two years after Weaver started growing his herbs, Markey talked him into adding chile peppers to his offerings. Markey, who has a culinary background and is a professional cook, toured extensively throughout the Southwest and became a fan of the regional cuisine. His expertise and the public’s growing interest in fiery foods convinced Weaver to explore the chile pepper market a bit further. 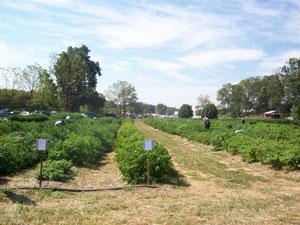 Now in his 18th year of growing peppers, Weaver’s farm is one of the biggest producers of chiles on the East Coast, boasting 200 varieties. On this day, he shows me the rows and rows of pepper seedlings. “That’s 10,000 pepper plants,” he tells me. On a hot, humid day like this, the plants are in fine shape. “They thrive in the hot weather if they’re watered,” he explains.

Weaver has adjusted his growing methods over the years, but says he has it “down” when it comes to peppers. The process starts in March, when the seeds are germinated. They are then kept in the greenhouse and watered regularly, but Weaver warns you have to be careful not to over-water them. The plants leave the greenhouse and go into the ground in early June. His pepper offerings have expanded, due largely to his customers. “People are always bringing me seeds,” he says. 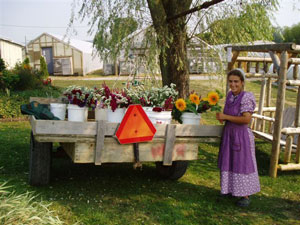 His customers’ growing interest in peppers and tomatoes and his friend Markey’s professional advice helped to launch the farm’s popular Field Excursion Days in the mid 1990’s. “People were buying plants but didn’t know how much fruit they produced,” Markey says. “So I said, ‘The next step is educating people on how to cook with them.’” The first Field Excursion Day back in 1996 brought about 100 people to the farm, where they could pick their own tomatoes and peppers and get some recipe ideas. In 2010, almost 7,000 people toured the farm over two days in September.

At first, peoples’ taste for the chile pepper was written off as a fad, but Weaver says that couldn’t be further from the truth. In fact, he regularly hears from people who are looking for the ultimate chile pepper—the hotter, the better. And of course, he is happy to oblige. “Our most popular pepper is the hottest in the world,” he says, speaking of the Bhut Jolokia, or Ghost Chile. This killer measures an incredible 1 million on the Scoville scale. The Trinidad Scorpion is another big seller, Weaver says. His customers travel an average of 40 to 60 miles to buy their favorite varieties, although he regularly meets folks from Virginia, Washington D.C., and upstate New York. All of Weaver’s pepper varieties are available for sale as transplants, which could explain the popularity. 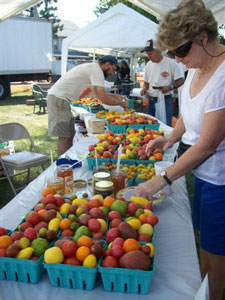 As if growing the hottest peppers on earth wasn’t enough, Weaver is also known for his heirloom tomatoes. This was another example of his risk-taking nature paying off. While paging through a seed catalog, the tomatoes caught his eye. “I knew red or yellow tomatoes, but I didn’t know about the other colors or flavors,” he said. But he decided to take a chance and ordered a few seeds. “I couldn’t sell the first crop,” he admits. “The second year I had a larger crop, and they started to sell slowly.” Obviously purple, pink, and green-and-yellow striped tomatoes were still a bit too exotic for his customers’ tastes. But these days, his customers are a little more adventurous and the rainbow of tomato varieties sell well. As with the peppers, Weaver receives seeds from all over the world.

Weaver’s excursion days are held on the same days as the Chile Pepper Food Festival in nearby Bowers, co-organized by Markey. This year the Festival takes place on September 9-10. It’s an ideal partnership on both sides. Festival attendees can not only get their fill of all things hot and spicy, but they get the added bonus of taking one of four horse-and-wagon teams to the farm to pick their own peppers and tomatoes. And the numbers at both the excursion days and festival are growing. “People are experimenting with food more than ever,” Weaver says, and they are always on the lookout for something hotter, spicier, and more flavor-enhancing. Chances are, Weaver already has it in his field.

Meadow View Farm doesn’t have a website, but the Chile Pepper Food Festival does. Visit the site for a complete list of Festival activities, times, etc.