Chile Pepper Seeds… from all over the world from the Chile Pepper Institute. Buy online at www.chilepepperinstitute.org

Pepper gardeners should always plan before they plant. The planning involves many elements: the varieties of peppers to grow, other vegetables and herbs in the garden, the type of garden, and the preparation of the garden before planting.

There are a large number of pepper varieties available to the home gardener, so choosing the best pepper varieties to grow in the garden is important. Seed companies and state college experiment stations devote tremendous effort to the development of disease- resistant, highly productive varieties that are tailor-made for different climactic conditions. Some of these new varieties may be better than the ones gardeners traditionally grow.

Seed and live bedding plant catalogs offer a far wider choice of varieties than seed and plant displays at local nurseries and retail shops. Catalogs are also the most dependable source of new varieties, and many of the seed companies offer what they call propietary cultivars, varieties that are sold exclusively by one company. Often, these proprietary cultivars are hybrids, second-generation crosses that must be hand-pollinated each year. Seed catalogs also offer better access to the All-America Selections, which are varieties chosen by experts as the all-around best. 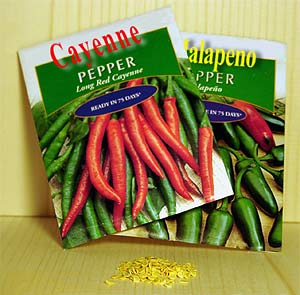 To decide which varieties to plant, consult gardening neighbors, a local gardening club, or the county agricultural or extension agent; or, simply learn from experience. When reading the variety description on the seed packet or in the catalog, the grower should look for the qualities that are most important, such as growing period, yield, disease resistance, and recommendations for climactic zones. Some varieties are best suited for pickling, some for drying, some for fresh use, and some for processing and freezing.

A variety that performs well in one region may be unsuitable in another location because of disease susceptibility or maturity date. However, it is difficult to persuade dedicated pepper growers not to grow a specific variety. Even if the soil conditions and climate are wrong, pepper gardeners can modify the microclimate in their gardens and containers. For example, shading habaneros in the Southwest generally improves their performance and yield, and creating a scree in the garden to improve drainage can save peppers that are susceptible to phytophthora root rot.

Some basic tips will make the pepper gardening experience more enjoyable. In many climates, the variety makes the difference between a bumper harvest and outright failure. In the Southeast and Midwest, where summer rains are common, peppers with resistance to bacterial leaf spot should be grown. This disease, caused by a bacterium, cannot be controlled by chemicals, so planting resistant varieties is the best and most effective way to ensure a bountiful harvest. The catalogs and seed packets describe the resistance factors of the varieties.

The early or late maturity of a variety is also a very important consideration. At high altitudes or in cool climates, both with short growing seasons, the pepper variety must be able to mature and set fruit rapidly. Early-maturing varieties are valuable to the cool climate gardener who might not be able to mature the late cultivars at all because of their heat requirements, and to the hot climate gardener who wants an early harvest.

However, knowing even the approximate growing period can be useful to gardeners in hot climates, who can plant early varieties at the beginning of the season so that they can be harvested before the really hot weather arrives. And an early, 60-day pepper, planted under plastic tunnels in California or Florida in December or January, will mature in March. However, if this same variety is planted in late spring, it might mature in 50 days or less, but with an underdeveloped plant and small, sunburned pods.

Many new varieties of peppers are hybrids that are superior to the older variety of the same or similar name. Hybrid varieties often have resistance to one or more diseases, grow rapidly, and produce more uniform pods than the older variety. Hybrids usually cost more, but for most gardeners, the disease resistance alone is worth the additional cost. This fact is especially true for organic gardeners who eschew pesticides. Hybrids do not reproduce true to type because they are only second-generation crosses, so saving seed not worthwhile.

Here are some hints about how to choose the varieties to grow. First, know your own needs. Pepper enthusiasts John and Ann Swan of Westchester, Pennsylvania, put it this way: “Before we order seeds, we decide how many fruits of each variety we will need to grow for our own kitchen and for the Pennsylvania Horticultural Society’s Harvest Show. Then we project how many plants we will need to produce that number. Finally, we add a few varieties that we’ve never grown before.”

Keep records about the pepper garden, especially a list of varieties planted and which ones performed well. Use a loose-leaf or bound notebook, or a word processing file, rather than individual notes, to prevent losing important information. Record when the seeds or transplants were planted, how many pods were produced, and when they matured. Also record any disease problems, unusual weather, insect infestations, or any other observation that is significant. At the end of the growing season, these records can be reviewed and the best-performing varieties can be determined. By comparing the performance of the varieties, the grower can eliminate the poor ones and replace them with others the following year.

Other Plants in the Garden

Another important factor in choosing pepper varieties is the selection of accompanying plants in the garden. Because most people grow peppers for their culinary use, it makes sense to select other vegetables and herbs that blend harmoniously with peppers in meals, especially if peppers are a primary crop in the garden. Peppers are, of course, consumed by themselves in fresh or pickled form. But their most common use is in combination with other foods. An informal survey was conducted of books with collections of hot and spicy recipes to determine which vegetables and herbs are most commonly combined with peppers. Based on the results, gardeners should use the following list, along with their own tastes, to select the vegetables to accompany favorite peppers in the garden.

Basil. This herb adds flavor to hot and spicy Italian sauces, and can be combined with fresh green chile peppers such as New Mexican, serranos, and jalapeños, to make powerful pestos. It also flavors stuffed Bell or Pimiento peppers.

Beans. The combination of beans and peppers is traditional. Green beans are often seasoned, but the most common blend is pinto beans and the red pods or powders of anchos, pasillas, chipotles, or New Mexican varieties.

Carrots. This root crop is pickled with peppers, cooked with small hot peppers and dill, and used as a base for habanero pepper sauces. Cauliflower. 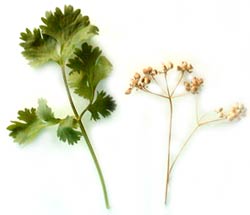 Cilantro. Also called coriander leaf, this herb is the principal seasoning in fresh Mexican and Southwestern salsas. It combines well with serranos, jalapeños, habaneros, and piquins.

Corn. When processed into meal and then tortillas, corn with chile peppers is a traditional combination, appearing as tacos and enchiladas. However, fresh corn is often cooked with green New Mexican varieties and is also used in fresh salsas.

Cumin. The seeds of this herb are commonly used to spice Mexican and Southwestern cooked chile pepper sauces. 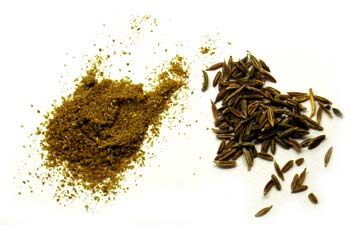 Eggplants. Fellow members of the Solanaceae family, eggplants and peppers are often combined in casseroles. Garlic.

The bulbs of this pungent herb are commonly combined with peppers in salsas, sauces, pickles, chutneys, salads, soups, and curries.

Jicama. A favorite salad ingredient in the Southwest and Mexico, jicama is often sprinkled first with lime juice and then with red chile powder.

Onions. Onions are probably the vegetable most commonly combined with peppers. They are used in sauces, salsas, salads, pickles, and casseroles. Oregano.

Potatoes. Another ancient combination, this time from South America, potatoes and peppers often appear together. Cooked potatoes are commonly topped with chile powders and sauces. Squash.

Varieties of squash, such as zucchini and crookneck, are often cooked with fresh hot peppers. Winter squash and pumpkins are baked with chile powders.

Spinach. As with lettuce, spinach combines with peppers in salads. However, it is also cooked with New Mexican varieties in dishes such as quelites.

Tomatillos. These small husk tomatoes are popular in the Southwest and Mexico. They combine with fresh hot peppers such as Serranos and Jalapeños in salsas and sauces. 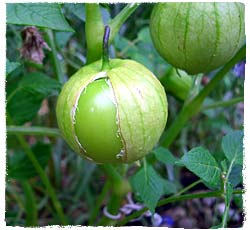 Tomatillo (not a green Tomato) 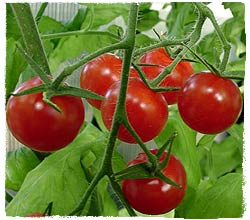