Pepper growers in colder climates in the United States and Canada, and in higher altitudes such as Colorado (a 56-day growing season at 8,500 feet), face many challenges in producing a good crop: a short growing season, low night temperatures, unexpected frosts, and high sunlight intensity. Fortunately, there are solutions for these problems.

Handy Hints. In his garden in upstate New York (Zone 5), Ray Lagoe grows more than fifty varieties of chile peppers–everything from habaneros to tabascos to serranos. Ray notes: “If you follow these guidelines and don’t rush and plant too early, you should have the same excellent results I’ve had for years.” His guidelines are:

Dick Worth, who grows eighteen varieties of peppers in Dauberville, Pennsylvania (Zone 6), says that a head start is the best strategy for gardening in cooler climates. “I planted habanero seeds in flats under grow lights on February 15,” he told us, “and transplanted the seedlings into four-inch peat pots on March 15. I kept the potted plants on a window sill until the middle of April, when it was warm enough to transfer them into a cold frame. I put the potted plants into the garden on May 15.”

The results? “I picked the first edible pods in the middle of August,” Dick reported. “The mature plants were about 30 inches high and 30 inches wide, and each of them produced approximately 50 to 60 extremely hot fruits.”

Site-Specific Planting. Cold weather gardeners need to pay particular attention to garden planning. Planting the peppers on the south side of ridges that run east and west in the garden will increase the growth rate because the soil facing the sun will be warmer than level soil. Raised beds that slope toward the south can also be used. Sunken beds covered with polyethylene sheeting that has been cut with slits for ventilation will give plants a good start in cold weather.

Row Covers. In Connecticut, the problem is that the growing season for bell peppers is too short to achieve good production of mature red and yellow pods. In 1987 and 1988, Martin Gent of the Connecticut Agricultural Experiment Station used floating row covers made from spun-bonded polypropylene. This light and porous material is draped directly over the plants and traps solar energy, warming the plants by 5 degrees F. during the day.

Gent transplanted seedlings of numerous bell varieties on April 20 and covered them for eight weeks. He also transplanted plants on May 23 and covered them as well. The later transplants did not result in early production, but the results for the April 20 transplanting were good, with several varieties (Golden Belle, Gypsy, Canape, and Parks Early Thickset) producing early yellow or red pods. Growth under the row covers increased yields (number of peppers) by 12 to 19 percent; however, the average weight of each pod decreased between 5 and 15 percent. Gent concluded that row covers work well for gardeners in short growing seasons who need earlier maturing pods.

Row covers are also available to home gardeners from mail order companies and garden shops. The manufacturers of Reemay say that their product insulates plants against light frost and enables the grower to plant 10 to 14 days earlier. They also claim that their spun polyester row cover extends the harvest by two to three weeks and keeps insects out–which would be a perfect way to avoid cross-pollination. Plastic row covers, which are really small row greenhouses called cloches, protect delicate plants from wind, cold, and snow–but not against insects.

Warming the Ground and Extending the Season. In addition to mulches and row covers, there are other methods to warm the soil so that peppers can get a head start during a short growing season. Some gardeners grow their peppers inside automobile tires (or inner tubes) that are filled with water. The tire protects small plants from the wind and absorbs heat from the sun. The water warms both the soil and the air around the peppers, releasing heat during cold nights.

With the tire, the open water may offer breeding sites for mosquitos, so place a few drops of motor oil on the water. Many nurseries and garden supply shops sell flexible plastic rings that are filled with water, serve the same purpose as the tires, and are more attractive.

Another soil-warming technique is to fill one-gallon plastic milk jugs with water and bury them halfway in the ground next to the plants. Solar radiation will heat the water, which will keep the ground warmer near the plants.

Reflector panels, made of wood and painted black or aluminum, can be mounted on the north side of ridges that run east and west to reflect sunlight onto both the plants and the ground. Such reflectors should be removed later in the summer when the weather heats up.

Microclimates in some regions seriously affect the length of the growing season. For example, in Albuquerque, certain parts of the valley are hit by early frosts but the higher elevations are not (cold air sinks, remember). What often happens is that after an early frost, the weather will warm up sufficiently for another three weeks of growing. The problem is to keep the early frost from killing the plants. Short of using heaters, like the citrus growers do, the best and easiest solution is to cover the plants.

Many materials can be used to cover the plants, such as cotton bed sheets, clear or black plastic sheeting, nylon netting, plastic row covers, and even large cardboard boxes. The choice for the gardener depends on the arrangment of the plants–and, of course, their size. Ideally, the thickest and most dense material will retain ground heat the most efficiently. However, sometimes thick material is heavy enough (especially if there is rain or snow) to break off branches.

The commercial copy for a product called Wall O’Water claims that this product adds up to eight weeks to the growing season. “Teepees” of clear plastic eighteen inches high, filled with three gallons of water, surround young plants and protect them from the wind and cold. The water teepees absorb heat and release it during the night. When the plants are mature and frost threatens, the water retains heat and releases it at night. In the case of freezing temperatures, the water actually releases heat as it freezes, further protecting the plants.

Recommended Varieties for Colder Climates. We have searched the information sent by various state cooperative extension services in colder states to find the recommended varieties for those areas. Pepper growers in colder regions should contact their extension services for suggestions, then order as many seed catalogs as possible. High Altitude Gardens in Ketchum, Idaho, specializes in seeds and resources for cool weather gardening. The following suggestions are from Alaska, Colorado, Idaho, Minnesota, and Vermont. These varieties are probably the best for cooler climates, but are certainly not the only varieties to try. 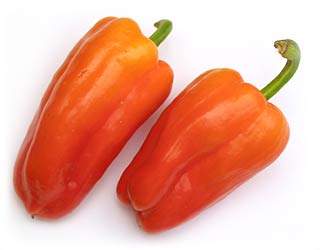 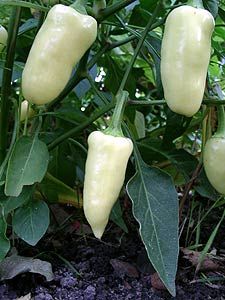 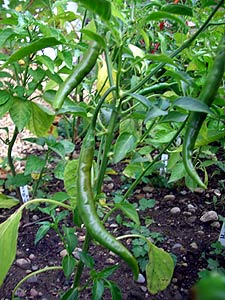 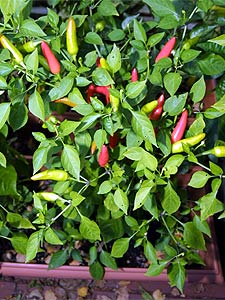