Salt block cooking has become one of the latest “trendy” way to cook food… similar to the way plank cooking and stone grill cooking was a few years ago. The concept is simple: you preheat a block of Himalayan salt to a very high temperature on your grill or stovetop and cook whatever you like… meat, fish, poultry or vegetables. During cooking, the food picks up salt flavor from the block so don’t salt the food before cooking.

The blocks may also be frozen or refrigerated and used for cold-food presentation such as caviar, sashimi, ceviche, smoked salmon or fresh fruit.

I have salt blocks that were provided by POSHsalt: an 8 by 8 by 1 1/2 inch block and two 4 by 8 by 1 1/2 inch block and other blocks provided by SaltWorks. (SaltWorks also sells a wide variety of specialty and gourmet seasoned salts.) I’ve used salt blocks for a variety of cooked and cold presentations and think it is novel but probably not something to do every day. For cocktail parties or a fancy dinner, salt blocks do make a unique dining experience.

As I learned, be careful the first time you use a salt block. Like cast iron cookware, salt blocks need to be “seasoned.” To do this, use your stovetop or grill. Do not use your oven as the block could explode (as mine did on the grill) and damage your oven. Even if the block shatters, you might have pieces large enough for grilling. If not, the salt block pieces may be ground with a grater (such as a Microplane®) and used for cooking or table service. (When one of my blocks exploded in the grill, I ground up the pieces and then smoked it using apple wood making some great smoked salt!)

While I don’t recommend preheating the salt block in an oven, Monica Guest of SaltWorks said it is an accepted method. “I have heard of this kind of breakage happening with salt slabs before,” she notes. “Each piece is natural and therefore unique. The threshold for temperature and pressure is different with each one. That being said, you will want to make sure that your slab is completely dried out before putting it is a cold oven, raising the temperature slowly. The salt is hydroscopic, picking up moisture in the air; this will help prevent form the expansion and refraction if it is drying out too quickly. You want to also make sure that you eliminate/ limit any moisture or water the slab is exposed to.”

As she recommended, be sure the block is completely dry before beginning the seasoning.

Using a gas stove: Put the salt block on the stove top. Set the heat to medium-low and allow the block to heat up for at least 15 minutes then increase the heat slowly… medium for another 15 minutes and then medium-high for the final 15 minutes. If extremely hot temperatures are desired, increase the heat to full high for another five to 10 minutes (the block will get up to 500 degrees F. so be careful handling it).

Using an electric stove: You’ll need a wok ring or a diffuser to keep the block off of the burner. Place the block atop the ring and proceed as outlined above.

Using a grill: Set up a charcoal grill for indirect heating and place the salt block on the cooler side of the grill. Continue increasing the temperature (by opening the lower vents or adding more preheated coals) until the block is thoroughly heated. If you’re using a gas grill, heat the block in the same manner as a gas stove.

(I use an infrared thermometer to check the block’s temperature. It should be at 500 degrees F. or higher for sautéing.)

Allow the block to cool to room temperature before removing from the grill and cleaning.

Cleaning the block is straight-forward. Rinse the cooled block under running water and brush the block with a nylon brush or a clean green scrubby and allow the block to air dry on a wire rack. After drying, store the block between two kitchen towels in a dry location.

The first food I prepared with a salt block was a Sichuan citrus scallop and shrimp appetizer (this could also be an entrée if you increase the number of shrimp and scallops per serving). Following the manufacturer’s recommendations I placed the dry, room temperature salt block on an unheated grill and turned the grill on to its lowest temperature allowing the salt block to warm gently (this also removes any moisture that might be on the block). Then I slowly increased the grill’s temperature until the salt block reached the desired temperature… for me the process took about 45 minutes until the block reached 550 degrees F. The key is to slowly increase the temperature otherwise the block may shatter.

Once the block is at the desired temperature, add the food and cook until done. For the shrimp and scallops, it only took about two or three minutes per side until they were done. 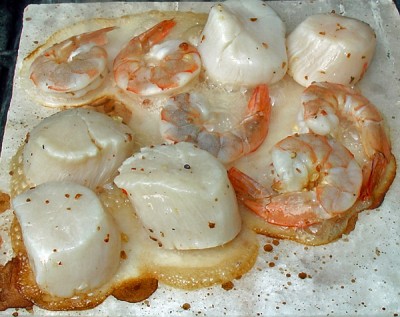 Shrimp and Scallops on the Block

Combine 1 1/2 tablespoons of the lime juice, the lemon juice, peppercorns and olive oil in a small container. Add the shrimp and scallops and marinate, refrigerated, for one hour. Drain the seafood and discard the marinade.

Garnish the seafood with the lime and lemon peel and drizzle with the remaining lime juice. Sprinkle with additional crushed peppercorns if desired.

The second item I prepared was classic Thai street food: Crying Tiger Beef. But instead of cooking a whole piece of marinated skirt steak (the traditional method), I bias-sliced a partially frozen steak and marinated the sliced beef. When the block was screaming hot, I quickly seared the steak strips to medium-rare, about two to three minutes per side. (The longer food stays on the block and the higher the food’s moisture content the more salt it will pick up from the block.)

To accompany the steak, I grilled marinated asparagus on the salt block until crisp-tender and served it with Jasmine rice.

Yield: Serves two as an appetizer 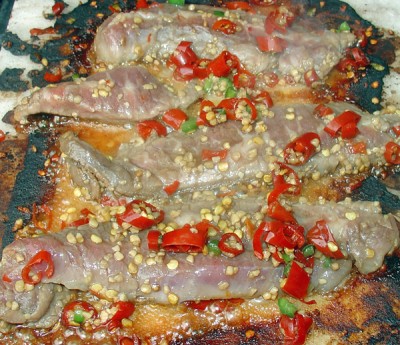 Partially freeze the steak. Bias-slice the steak across the grain into 1/4-inch thick strips.

Combine all of the marinade ingredients in a small bowl. Add the steak strips and marinate, refrigerated and covered, for two to four hours. Remove the steak from the marinade and drain well. Discard the marinade.

Prepare the salt block for high heat cooking. Sear the steak strips for about two minutes or until done as you like. 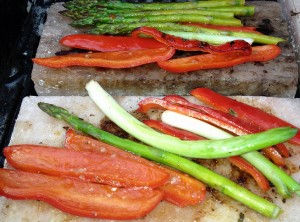 A simple marinade and quick grilling on a salt block makes for a fast and tasty side dish that pairs well with any entrée.

Prepare a salt block for high heat cooking and sauté the vegetables for two to three minutes per side or until crisp tender.

(Editor’s note: Mike Stines is a professional chef and holds a “Doctorate of Barbeque Philosophy” (Ph. B.) degree from the Kansas City Barbeque society. His award-winning book – Mastering Barbecue (Ten Speed Press, 2005) – has been called the “go-to” book for BBQ knowledge. His website is CapeCodBBQ.com.)